This year, I'm teaching a lot of college courses. Seven courses January through March. Next week I start seven again.
Sometimes I love teaching college. Like at the end of the quarter when students come up and thank me. When they send me an email, like Donald did: 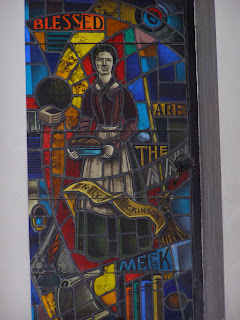 During class on Tuesday, a student named Victor came in late and proceeded to set up his computer while we continued class. After an hour and a half of teaching, I released the students for a 10-minute break. We started class again and Victor waltzed in 10 minutes after we had started class again. Within five minutes, Victor, clutching his cell phone, walked back out to the hall. I was trying to break the students into groups of three. Would Victor be there for it or not? Should I give him the assignment too?
When the students were separated into groups, I stepped into the hallway where Victor was on the phone. I stood in front of him for a minute until he asked the person on the phone to hold on for a minute.
"I feel like we're really interrupting your day with this whole class thing," I said, trying to keep it light. Usually, this approach causes students to apologize for leaving or disrupting class. Instead, Victor came out with both barrels.
"Look, I run my own company. None of my other professors mind if I leave class to take phone calls."
I told Victor, "I don't mind if you leave class to take a phone call. Just take your things with you and don't come back into class."
"Do you want to go talk to the dean right now?" he asked.
"I'm happy to go with you after class," I told him and motioned toward the classroom, full of 25 students who hadn't taken phone calls.
After class, I stopped in to see the dean. Apparently Victor was upset that I had interrupted his phone call.
At the public college, my expectations are that the students will do the work and meet the criteria. I expect them to be respectful of me and the other students.
At the for-profit college, my expectations are to kowtow to the students. And I wonder if we aren't doing them a disservice. I accept late assignments. I don't say anything when they come into class late. How am I preparing them for the real world?
The dean doesn't actually support me. He says he'll carefully word an email message to Victor that let's him know his concerns have been heard. I want to roll my eyes.
I go out and buy a lottery ticket, and if I win, my first move is to turn in my resignation at the for-profit college.
at March 22, 2012

Victor is an idiot.

The dean is wrong and Victor is a self important weenie. One of the lessons of college is how to prioritize your schedule. It is not how to become my first ex husband. You are an excellent teacher. The dean is spineless

Well, how arrogant. I suppose you have to pass this Victor?

What the hell is Victor doing there anyway? The dean is a weenie (geez I hate fonctionnaires like him) and you're not. You need to teach him how to grow a couple! Go Paulita!