This morning was Rini's funeral. They held it in the Greek Orthodox church because Columbus doesn't have an Eastern Orthodox church. Rini's family was from Romania a few generations ago. 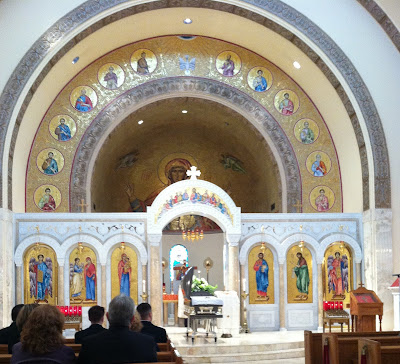 The Greek Orthodox church is gorgeous, but the funeral was rather dry. If you don't want people to cry at your funeral, it would be the best funeral ever. The priest chants and sings, sometimes in another language, for a good half hour while everyone stands.
The incense is a nice addition though. I wondered if the incense has some special numbing power as the scent drifted throughout the church. Then the priest gave the brief eulogy. He called her Irene, which, to me, means he didn't know her at all, since everyone called her Rini.
So I was dry eyed. At the end, they asked everyone to walk to the casket to pay last respects. I'm not fond of this tradition. I'd rather remember Rini as she was in life, even complaining in a hospital bed.
Then, when her two sons and mother walked up to the casket, I couldn't help it. I realized they would never see their mom again and I just felt so sad.
As I drove home from the funeral, I thought for a minute that I couldn't wait to tell Rini who was at the funeral and who was missing. She would probably laugh when she found out the secretary from two years ago showed up, but the chair of the department didn't. This was some juicy gossip Rini was sure to enjoy. Then I realized I wouldn't be able to tell her.
Her departure leaves a hole in my life too.
Thanks for your friendship, Rini. Rest in Peace.
at December 14, 2011

I'm sorry to hear about your friend. You can still tell her, it's just you won't get an answer in the form of words. She might give you a sign that would be nice :).

You don't realize the "space" one occupies in your life until they are gone. That was one of the most surprising things that I felt after my Dad died. The void that he left was absolutely enormous. And I "couldn't wait to tell him things" for nearly a year after he died. I think the people that are close to us in our lives just become so much a part of us, that even when they are gone, they are still with us in some sense.

I bet she knows exactly what you are thinking. I bet you will get some signs from her too if you are looking for them.