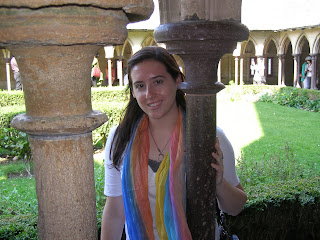 For awhile now, I've been wishing that we hadn't made Grace's reservations home so late in the month. She was feeling uncomfortable staying with the French teenagers who made her feel like an imposition.
I called the Airlines and they said the change fee was $250-$275 plus whatever the flight difference was.
I called AAA and talked to a travel agent who said she couldn't do anything to help.
Tonight though, Grace and I were both wishing we could be together, and the French teenagers emailed her to ask if she could find another place to stay next week because they have tests coming up. (You can imagine that Grace is a really noisy person who would keep them from studying.) So she messaged me in a slight panic.
I'll fix it, I messaged her.
I would have to bite the bullet and pay the high change fee.
So I called the Airlines again. I got a man with a super deep voice and told him I wanted to find out what it would cost to change my daughter's ticket. He immediately seemed sympathetic.
I asked him for a flight any time between now and Dec. 19 and the cost to change it. He searched for a minute and talked to me about his son in a private college in North Carolina.
"How about Wednesday? Your cost would be $1," he said.
"One dollar plus the $250 change fee?" I asked.
"No, ma'am. One dollar."
Wednesday doesn't work because Grace will be on a train back to Paris, but the helpful deep voiced man found the next available date and said, "That one's going to cost you $26."
"I'll take it!" I said.
And so, Grace will be home by the end of the week.
Now, I just have to figure out how to tell Tucker that he doesn't get a room of his own anymore.
at December 05, 2011

OMG....how wonderful. I guess sometimes "policy ISN'T policy". I can image being a young and in Grace's situation and want to take the next plane out as well.

I'm so sorry those "friends" weren't more nice with Grace. I hope she enjoyed Paris in spite of them.

Diane, Yes, see it's a miracle that I found someone helpful to bend the policy.
Linda, She had a great time and is even a little melancholy about leaving, but can't wait to get home. It's all very complicated. Thanks for showing her Montmartre and being part of the consortium that helped her enjoy her stay.

Fabulous ! On my in to work I was thinking 2 more weeks and Grace will be home.

Thanks for sharing the news.

Yes Virginia There is a Santa Claus

I'm happy for you! I'd do the same for my daughter!

So wonderful that you are spared great cost and can get your daughter home. Sometimes, life treats us kindly.