This morning I rode my bike a mile, took off my shoes and tried to run barefoot on the high school track. Even though that track is supposed to be rubberized, it feels like asphalt on the bottoms of tender barefeet. I didn't make it 100 yards before I took to the grass, put on my shoes and rode home again.
The reasons for this bike ride and barefoot run attempt are all because of the adventure we had Saturday morning.
I can see my running friend Pam waving at me wildly right now. "No, no! What happens on the running trail stays on the running trail," she'd say.
The story actually begins on Friday though, when I went to buy new running shoes. The running shoe store is great because the sales people know what they are doing and they encourage you to run around the building to test the feel of the shoe. I chose a new pair and decided to wear them Saturday morning for our 9-mile run.
I know better than to wear new shoes for a long run, but they felt comfortable.
I could hear the distant rumbles of thunder as I dressed Saturday morning to meet my friends for our run. I turned on the weather channel and saw storms swirling around Columbus. 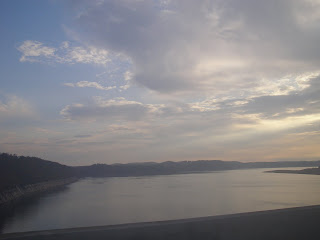 On the drive to meet my running companions, I saw a streak of lightning to the west. I decided we should run the 1.2-mile lap around the lake eight times rather than running along the trail north 3.75 miles. That way, we would be within a half mile of our cars at all time. If the storm struck, we could get to safety.
Also, I had my old shoes in the car, so if my new shoes started to hurt, I could switch.
Pam did not like the lake plan.
"But why would lightning strike us when it has so many other things it could hit?" she asked.
Isn't that always the question?
Maybe it would hit a tree and the tree would fall on us, I suggested. Then you'd feel really guilty.
Princess joined us for our run after a long absence. She was willing to follow along with whatever we decided.
We ran around the lake first and the sky seemed to be getting lighter.
"Okay," I said, "we can go north."
So we started running away from the parking lot and safety. Mostly the storm seemed like something happening in another part of the county. We could hear it distantly.
As we got toward the turnaround part of the trail, the rain started to fall.
"We can stand under the shelter while it passes," I told Princess. When we got to the shelter though, it was a slatted roof that let the rain come through. We waited only a minute under the beams before starting again.
The rain soaked our clothes, my shirt clinging to my shoulders and heavy. We had gone past a clear area and were amongst the trees again when a bright bolt of lightning startled us.
"Did you see that?" Princess said. And then her words were drowned out by the percussion of the thunder so loud that it reverberated in our chests. The kind of thunder that sets off car alarms.
"We have to go back," Princess said, her eyes rolling like a horse in a barn fire. Near the turn around were some stores and a coffee shop where we could take shelter.
"But if we go back, we have to run through the clearing again," I said. Would we be safer on the trail under the trees?
We kept going because we didn't know what else to do.
Whenever lightning flashed, Princess would point it out and the thunder always seemed louder, so we superstitiously told her to stop acknowledging the lightning.
The storm had let up by the time we reached the lake again, but our clothes, washed with rainwater freshness, weighed a couple of pounds more than when we left. And our shoes squished from the wetness.
My new shoes rubbed against the two little toes on my left foot bruising them. So even though we had only gone 8.7 miles instead of 9, I limped toward the car. I couldn't wait to take off those painful shoes and wet socks.
And when I put on my old running shoes today, those little toes still complained from the bruises, which is why I tried to run barefoot, but failed.
at July 04, 2011

So the storm that came and visited us visited you! We had a wicked one Saturday night too! Luckily we were indoors. Glad your safe the lightening is dangerous but it's the thunder that always freaks me out especially when it sounds like a freight train passing in front of your house or cottage.

You don't know how relieved I am that everyone made it back to their cars safe and sound!

I was tempted to ask for an injury report Sat evening.

That was a loud blast of thunder!

If only Dream Girl were there....

I'm glad you all weren't hit. I hate breaking in new shoes. I'm told that the shouldn't hurt if they are right for you. Have you tried those shoes that are basically just soles?

Whoa! Sounds like you guys had one exciting run on Saturday. Sorry I missed it?

We had bad storms in Minneapolis on Friday night, which resulted in a rainbow in the night sky just as the sun was setting (picture a rainbow on a black background). It was UNBELIEVABLY AMAZING!