To follow up on a couple of blogs from the past few weeks:
Bald Tucker did very well at his swim meet. He missed making states but he dropped a lot of time in his events, including more than three seconds in the 100 butterfly. 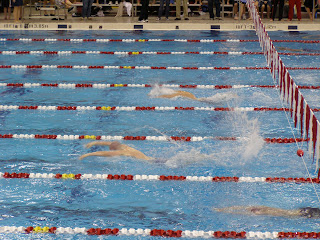 That's Tucker out in front. He won his heat. I know the times don't mean anything to non-swimmers, but suffice it to say that when I texted his YMCA swim coach the time that he swam, she responded: "Holy Sh**". She has asked him to go to Florida in April to swim at Nationals. Tucker is deciding whether he wants to commit that much time and effort to swimming over the next month. I know he is worn out from the season.
Spencer's last regular season basketball game was Friday. Spence played well and the teams went into overtime. With 20 seconds left, down by two, he was fouled. Spence moved his big high-top shoes to the line. Bounce, bounce, bounce. Swish. Now the team was down by one with another free throw left to go.
Time out.
No, not the opposing team's coach. Our team's coach called time out. He iced his own guy! He iced my son.
The other team's coach will sometimes call time out to make the player think about his free throws and increase the chance he will miss it. The other team's coach didn't have to because our own coach did.
Spencer missed the free throw and we ended up losing the game by three, so the blame didn't rest solely on Spencer.
And, finally, my best friend called again this week. She even commented on my blog post about unions! She said she didn't speak to anyone, even her sisters, last week while she tries to figure out her future. I can understand that. I'm here for her if/when she needs me.
at February 20, 2011

Lot's of sports excitement there. Glad you heard from your friend.

i can understand that oo