Well, swim districts morning dawned and Tucker stumbled out of the bedroom at 6:20 a.m.to find me sitting at my desk.
"Goggles," he said. "I need new goggles."
Then he went back to bed.
Of course, he needs new goggles on the morning of swim districts, not the day before or the week before. But we had other things to take care of first.
So after a trip to Kroger for NutriGrain bars and granola, I drove Tucker to the barber. He chose to shave his head for swim team. 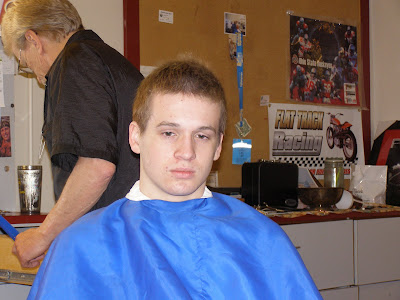 Here he is before the haircut. Even with his hair cut very short, it's bleached out, not his normal dark color.
The barber began with a trimmer set long and then reduced it even more. 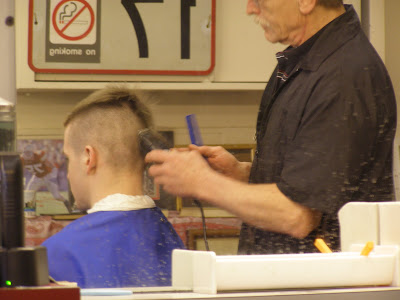 He was willing to make the pictures interesting. Too bad this one is a little blurry. 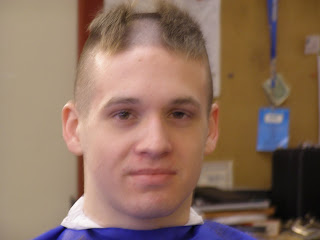 The barber made it as short as possible with the trimmer then said he could go one step shorter with a razor.
What? How could it get shorter than this? 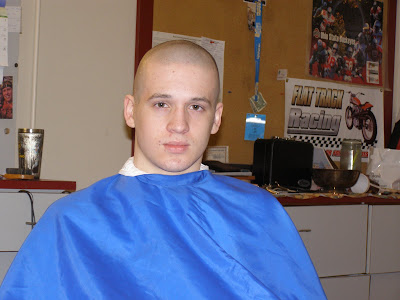 But, the barber laid a hot, wet towel on Tucker's head then lathered it up with warm shaving cream. Slowly, he began to scrape his razor across Tucker's head. 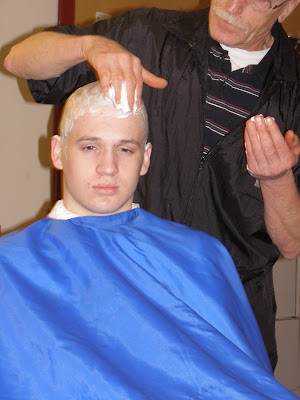 Luckily, the weather is unseasonably warm. The morning started at 58 degrees. Tucker walked out of the barber shop and felt the breeze on his bald head.
We drove up the highway and bought new goggles then went to the team breakfast.
There, Tucker met up with more of his own kind -- bald boys ready to swim fast this afternoon. 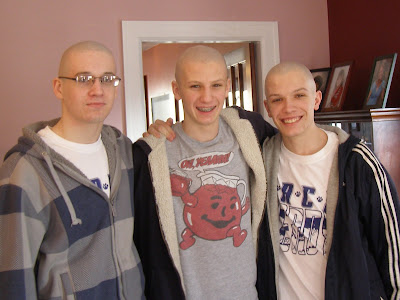 my husband does it often! Trims it down then uses a razor to shave it all off.

Honestly I don't think any of those pictures look like Tucker. Weird.

Well, I hope it works.