On Tuesdays, I work with a 28-year-old teacher named Emily. She sees the world in black and white. In proclamation after proclamation, she solves the world's problems.
"All 12-year-old girls should have IUDs inserted until they are old enough to support a baby," she said.
Yikes. How traumatizing for the 12-year-old girls still playing with Barbies, I thought.
"I will never have children because I have a life," she said the other day. "I like to stay up late."
That's when I asked her how old she was. My intent was to warn her to watch her assertions because those sorts of things always come back to bite you. How many people have said, "My children would never..." only to eat those words later. (See that's a mixed metaphor because how could the words bite you if you are eating them?)
Emily would not heed my warning. 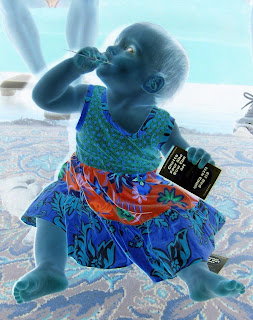 "Oh, I might change my mind some day, but if I have kids I'm going to homeschool them in a classical education."
Yeah, I tried that too.
It's possible, okay, probable, that at some point I was as strident as Emily. I saw the world as easily fixed if people would only follow my plan.
Emily is pale and slightly pudgy, perhaps because she hates sports or the talk of sports.
"If I had children they would never play sports because I couldn't bear to sit through those kinds of activities," she said.
She has blonde wavy hair that ripples down to her shoulders. Maybe she would be considered pretty in a classical education kind of way.
"How would a 13 or 14 year old have the opportunity to smoke pot or have sex? Where are their parents?" Emily asked.
I suppose Emily planned to spend every moment of every day with her children, even in their teens. No wonder she decided having kids is not for her.
Then I was telling a story about my friend Sheila whose daughter Beth is on a modeling trip to New York City alone at 17, and Sheila is very nervous about this trip.
"Oh my gosh, she's almost 18. She has to let go of her sometime," Emily said.
So, somewhere between 14 where she would spend every moment with her child and 17, she would relinquish total control and send the child alone to New York City.
"If I had children, there would only be two possible reasons -- to control them or to pick a cool name," she proclaimed.
Okay, I'm starting to agree with Emily's decision not to have children. As a parent, the last thing you can do is control your kids. They are always going to pick the opposite of what you would pick for them. I'm sure I didn't know that when I began this parenting journey though.
Just when I was beginning to think that I couldn't take many more of Emily's edicts, I began to feel a little sorry for her.
"People should wait to have sex until they can afford to raise a child," she said.
True, that would be the right thing to do, but who has that $200,000 on cash that it takes to raise an American child to adulthood?
"Well," I said to Emily, "I think it's very difficult for some people to wait to have sex."
"I was 24," she said proudly.
"And besides, sex is not that great."
Ouch. I'm afraid that told me a little bit more about Emily and Emily's marriage than I wanted to know.
at February 03, 2011

You and Emily make a great team. She is a bit of a straight man to your wisdom. A few more days and I say you've got the makings of a great parenting book.
Wonderfully written too.

I can't help feel sorry for Emily too (especially her comments about sex), but hopefully she'll begin to see the light as she matures.

that is too funny, she would drive me crazy.