We're now living in our new home. No more housesits. No more weekend escapes. We're in the midst of lots of dust and unconnected stoves.
The builders are making some real progress.
What started out as a utility room with a fuel oil boiler and water heater 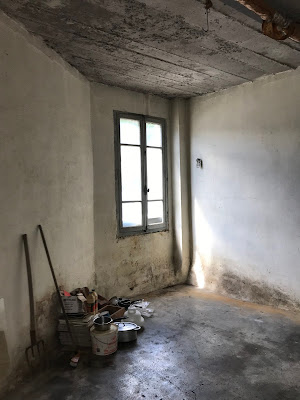 has had the floor raised to the same level as the next room. It has new tile, a frame, dry wall, electric outlets for the kitchen and plumbing ready to connect.
There's currently a man downstairs mudding the drywall to give it a smooth finish.

Once it's dry, we mist it (half paint/half water) let that dry and paint it.
Then we can put together our kitchen.
This is currently our kitchen.
The water heater has been moved to the former kitchen
and we'll put the washing machine underneath it and build a wall around it to make a cupboard.
All the other appliances are in the former kitchen. Even as I type, we're waiting for the dishwasher to be delivered.
I have a stove and can connect the oven with an extension cord. We have a microwave plugged in so can use that.
We've had a tea station since the English builders came so they don't go through withdrawal. But I hadn't been able to make coffee because I have one of those Moka pots that goes on the stovetop.
The friends we housesat for dropped by a press pot so I could make my own coffee this morning.


It's nice to not have to buy coffee at the bakery, where I felt the baker's wife was judging me. I had told her in my best mangled French that we had bought a house but didn't have a stove so I had to come buy coffee.
"Well, that's one solution," she replied, also in French and with a tilt of her head. She does not get us Americans.

Dinner is a bit tricky in our camping out house. Last night, I decided we could warm up soup in the microwave.
The French have a soup called velouté, which is vegetables pureed, sometimes with cream fraiche added. It's the same consistency as tomato soup but yummier.
So all I needed was some bread for us to eat with our soup. But the main bakery is closed on Mondays. I wasn't sure what time the auxiliary bakery closed so I decided to head into town to search for bread, figuring the small store or the tabac, which also sells bread, would be bound to have a baguette or something close to a baguette. Both of them were sold out! Everyone in town wanted bread on this rainy night.
We ate the soup sans bread and retired from the plastic covered sofas and the stack of boxes in the living room,
to our bedroom. That means walking up the stairs, past the bare bulb that hangs there to our bedroom, which has a headboard, a bed and one side table. The room hasn't been painted or "decorated" as the Brits say. I started on one wall and decided the color was too dark.
Now I have to make a new choice. I find myself surprisingly dispassionate about what color the rooms will be painted.
Tonight we're springing for a pizza and salad. Tomorrow night friends have invited us over. So we'll get through this camping period, and no one should worry that we aren't eating enough!
Now back to grading and teaching -- any excuse to avoid working on the house.
at November 05, 2019

Mercy! What a project! but it will be wonderful once done.

If you'd like to try another green for the bedroom, Farrow & Ball (available in France) has a grey green called "French Gray No.18" that is very sophisticated and neutral. Hope your renovations proceed apace and you will soon be able to enjoy your new appliances and refreshed spaces.

Loved this post Paulita. Enjoyed and savored every word, phrase, funny and picture. Signed, Not taking your writing for granted.

your blog is very good, and your writing skills is uniqe.
play bazaar
satta king

When your customers ask the same thing over and over again, create a video to answer them. This will allow them to quickly solve their problems without having to email or call your company. This saves you money in customer support and builds rapport with both current and potential customers.
satta king
play bazaar

Affiliate marketing is a great way to start making money online. You need to have a site with a steady stream of viewers. Find a niche that you are interested in writing about. Look for websites offering affiliate payouts, and see if you can join. You will make money from what your viewers buy.
satta king

Different countries have plants that are not always native to where you live and may not be easily accessible, or be able to tolerate an extremely humid, or dry environment. Call ahead or look online to determine which flowers are available in your destination country during the time your wedding will occur.satta king
play bazaar

think of something useful. My parents had matchbooks printed with their wedding date, which was great when they got married as no one knew smoking was bad yet. Today I might have a candle with a tag engraved the wedding date instead as it's far more healthy for them to burn that!
satta king
play bazaar

Check for bad links, slow loading times, messed up displays, etc. The quicker you find any problems and fix them, fewer people will see them. If people see problems on your site, they may think you're unprofessional.
satta king
play bazaar

Ranking high in a YouTube search is a lot simpler to do than rising to the front page of a search in Google or Yahoo. Learn how to build the correct types of tags for a YouTube video and you will find yourself at the top of the charts.
satta king
play bazaar

You ought to work out the entirety of the data you need on your duplicate and afterward distribute it on your site. This is a smart thought since you site an increasingly customized feel.
play bazaar
satta king
satta king