Hope springs eternal...
And slowly, like the progress of an glacier inching across the plains of America thousands of years ago, our house is getting closer to becoming a home.

Today, the electrician put in the lights and connected the dedicated plugs for the refrigerator, dishwater and stove. Earl is hard at work in the picture above deciphering the directions from Ikea.

Earl chose the light fixture to go over the table. It has Edison bulbs which are a bit hard to photograph.

The other night, after painting two mist coats of pain on the drywall then two base coats of matte paint followed by a coat of satin, Earl decided to tackle a small cabinet. We've never purchased Ikea before so had not idea how to begin, but eventually, we (mostly Earl) figured it out. I would wander through the room to hold something in place and say something like "I think this is backward."
This lower cabinet had three drawers, but it took awhile to figure out each drawer face came in its own box.
We haven't put the hardware on yet. We chose stainless steel drawer pulls and knobs for the cabinets, but now I'm considering switching to crystal. I would just need to convince Earl.
It took a bit of figuring before Earl looked at the picture to see that the large drawer is in the middle, the middle-sized drawer at the bottom. Seems counter intuitive.
The gas is not hooked up to the stovetop yet, but the over is electric, so I can roast some vegetables and barbecue some pork chops in the oven. It's almost like a real, home-cooked meal in our new house.

Meanwhile, in other parts of the house, lights have sprung up in formally dark places.
The kitchen had a fluorescent light that wouldn't flicker on anymore.
Earl removed it and replaced it with this fixture. 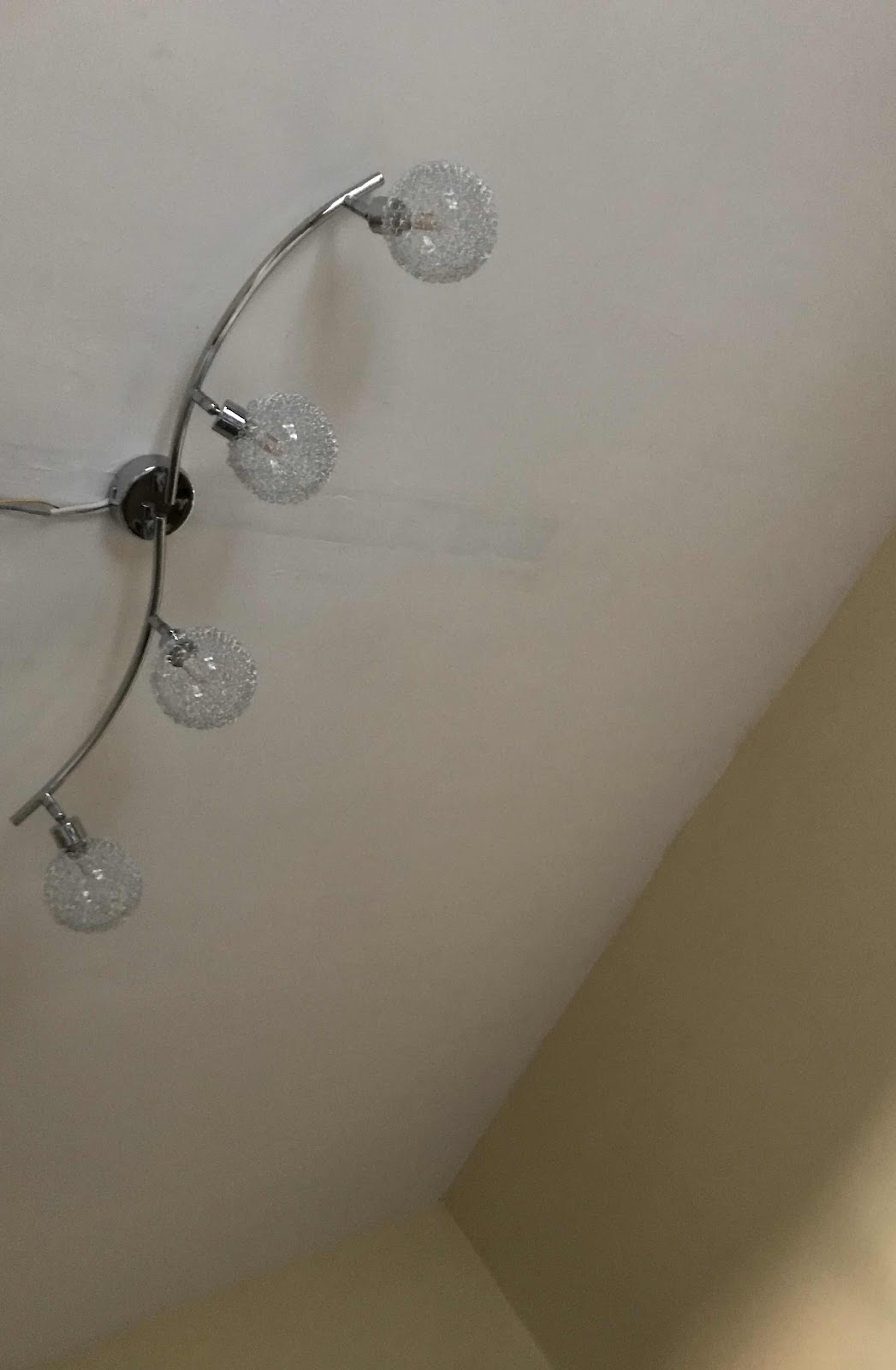 We still need to encase the wires, as the French do, but at least we have light in what has served as our kitchen while we've been redoing the new kitchen.
Earl put up this light on Saturday while I was in Perpignan with a friend. I dropped some groceries off at the house Saturday evening, working by the light of my cell phone, before I went to meet Earl.
He asked if I had stopped by the house. I told him I had. He asked how I liked the new light.
What new light? I asked.
I hadn't thought to try the light switch because the light had never worked. It's quite bright when turned on.
He also replaced the bare bulb hanging in the stairwell.

I found two light sconces at the Troc in Carcassonne for 8 euros each. I later saw them at Brico Depot (think Home Depot) for 19.99 euros each, so I got a bargain.

So parts of our house are getting to feel downright civilized. Before you know it, we'll be hosting people in our kitchen while we figure out what to do with the living room.

Good going, you two hard working people! I'm always too scared to do anything electrical, no matter how simple. If you can find episodes online through Youtube or Britain's Channel 4, you may enjoy the Escape to the Chateau and Escape to the Chateau DIY shows. They are all about owners who bought chateaux in France and are fixing them up. Same problems, just a bigger scale!

I so enjoy watching the transformation of your house. It is a lot of hard work, but totally worth it!

your blog is very good, and your writing skills is uniqe.
play bazaar
satta king

Get a solid handle on the words people ACTUALLY use to find what they're looking for and you can have confidence in the keywords that you choose for SEO.satta king
play bazaar

Use affiliates on your personal website. Do you have a blog or some other sort of presence online? Do you get a lot of traffic? Try affiliate marketing. It requires very little effort on your part. By registering your site with sites like Google Adsense, you could make a considerable amount in passive income.
satta king

Having this squared away from the first moment will help center and guide all the decisions related to the wedding. This will prevent a clutter of ideas.
satta king
play bazaar

More traffic equals more potential income, whatever the website's business. The effectiveness of a webmaster's traffic-increasing strategies, can only be judged if the tools are already in place to accurately record and analyse his or her website's traffic.
satta king
play bazaar

The added exposure you get will translate into more visitors and hopefully more sales. Even if you can't find a competition that is about your particular field, you can certainly enter contests about web design and appearance.
satta king
play bazaar

In any case, simply be cautious that you don't utilize copyrighted pictures or pictures for which you don't have the rights.
play bazaar
satta king
satta king

As opposed to checking the web for thoughts, go to your index of finished articles. Rework one on the off chance that you are completely frantic for content. Stunningly better, take an old article and compose a refreshed adaptation.
play bazaar
satta king
satta king

At the point when you are making the primary draft out of your next article, don't stress over language structure, spelling or editing until the article is done.
play bazaar
satta king
satta king