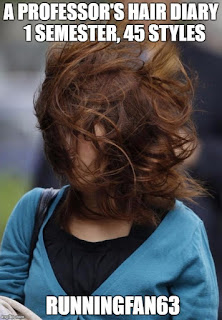 I've about given up on my hair experiment for the semester. The problem isn't the hairstyles, it's finding someone to take the pictures.
Grace has moved out, and many mornings, my husband decides to catch a later bus, so he is still in bed when I'm running out the door to work.
It seems selfish to force him out of bed on a chilly morning just to take my picture. I've tried asking the barista at Starbucks to take it if she's not busy, or the secretary in the English Department at school, but it all seems a little ridiculous.
I try taking the picture myself, but it just doesn't work out. 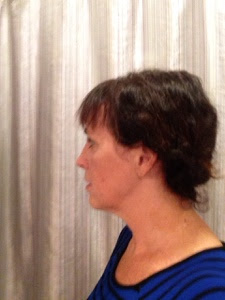 Like the time I tried to do two braids and then pin them up on either side. 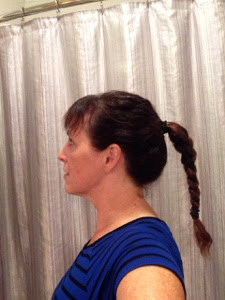 I ended up doing one ponytail braid.

Another day I did a loose side braid and took a picture of myself in the classroom after all the students had left. 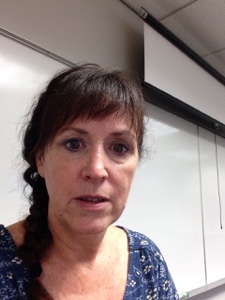 Monday, I did a ponytail and walked to work. Enjoying some of the lights on the 4-mile trek, but my hair was a real wreck afterwards . Must have been a lot of moisture in the air. 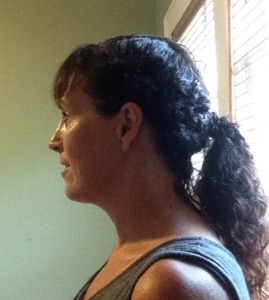 Wednesday I did a high bun that I bobby pinned down. I tried to take a selfie while sitting in the bookstore study area, but I don't think you can even see the bun. 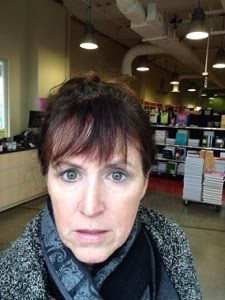 It's all been too much to worry about, perhaps. But I am eventually going to figure out how to do a milkmaid braid, like this:

Have any more students noticed?
I've done the milkmaid on other people, but it's hard. I can't imagine doing it on oneself. It's basically a French braid that you start by one ear and then do around the head instead of front to back. The hard part is making it even.

You are so lucky to have such beautiful long hair,mine is so dry and thick I have to keep it short which costs quite a lot of money here in france..they all look lovely styles

Well you've more than succeeded in my book! I had no idea there were so many hair styles.