I'm not sure what I want to say today, after the deplorable attacks in Paris, except that violence is not the answer.
I look at the terrorists and think that they are our modern-day barbarians. They don't care what they destroy, even themselves.
And I need to be clear that I do not equate people from the Middle East or people from countries at war with those who committed the bombings and shootings in Paris last night. It has never helped us to group all people who look alike or come from the same culture or from the same religion.
I teach many Muslim students and they are just like the Christian students, except in the way they worship.
No, these bombers and shooters, whether French-born, Syrian-born, Iraqi or Saudi Arabian-born, have a mental illness. They are part of a cult -- no more Muslim than they are Scientologists. They have been brain washed to believe that somehow killing others will increase the power of their religion. They follow violent leaders to their own doom, like the children followed the Pied Piper, entranced by the leaders' words and promises.
We need to show these young people that they can create change through non-violent ways. They can create in their countries a Paris of their own, where people dine and laugh in restaurants, where people gather to listen to music, where people safely watch soccer matches.
And those who we can't convince, we need to stop before they hurt others. 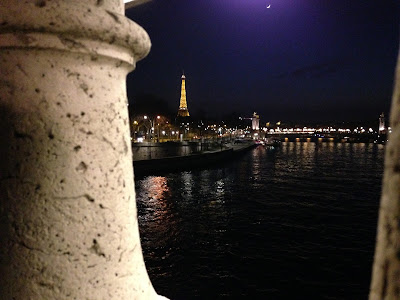 As we watched the news last night, the stations were broadcasting the phone numbers for the American embassy, both in Paris and in the U.S. But, the newsman urged, call home and let your family know you're okay.
Facebook has created a beautiful opportunity to avoid that phone call and let everyone know that you are safe. Whenever a tragedy or natural disaster occurs, they have a check in page for everyone who lives in the area or who has recently posted in the area.
So on my phone, I could look to see who checked in as safe. 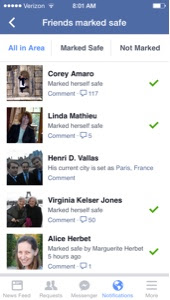 It's a brilliant idea. Most of my friends have checked in. Only one young man has not posted on Facebook since the bombings. He lives in Paris, but he often leaves for the weekend, so I'm hopeful that he is out of town.

When something so tragic happens, I have a natural instinct to draw my family around me. Grace was home last night to watch the television coverage. Tucker began texting because he heard the explosions during the soccer game. He said the announcers thought they were fireworks.
In an attempt to lure my boys home, I offered to make chili and chocolate chip cookies if they'd come home to watch today's football game. They probably won't make the 3-hour round-trip drive, and my need to pull them close will fade.
I try to find a bright spot in a tragedy, and luckily Upworthy posted a picture of the Eiffel Tower with the Mr. Rogers' saying. 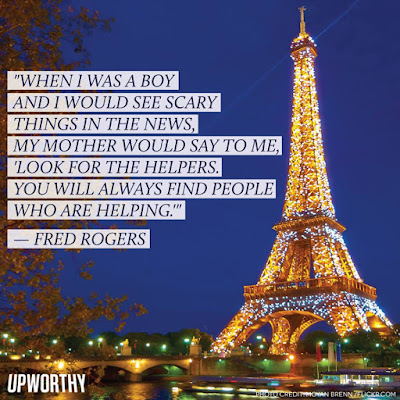 And last night during the coverage, we saw plenty of helpers, police, firefighters, soldiers, and even ordinary people who stripped off their shirts to bandage the wounded.

And then today, my friend Aline posted a quote from Mother Theresa. It's all we can hope for as we work toward peace.
“I alone cannot change the world, but I can cast a stone across the waters to create many ripples.”
― Mother Teresa

Thank you Paulita for your words. Hoping you hear from Henri soon. Thanks for the info regarding the FB check in page. May I share a link to your blog on my FB page?

Judy, of course. Thanks for sharing.
Aline, thanks for your inspirational quote so we can end I hope, not fear and anger

Thinking of you. Beautiful post for a horrible horrible act.

I have no more words , thinking of you and all our friends in Paris. ♥ I also saw the FB Alert page. A great idea and I could see that my friends were safe x

Paulita, your words were so thoughtful. It's numbing to think this has happened. It's all so senseless and horrible. Will be thinking of your friends and all of Paris.

A beautiful post, Paulita, and so well stated. I will keep thinking good thoughts for good notice on your one missing friend. All my Paris people have checked in, either online, FB or with email and I am grateful to know they are all right, but still trying to process the great loss of so many Parisians. It hurts to see this city I love in such a way. But Parisians are tough and they've survived a lot. They will not stand down.

Thanks to everyone. I know we all feel shocked and helpless by the violence. It's nice to share with each other.

Thank you for your post. This is such a horrific tragedy that hurts us to our core. The quotes help to encourage us and heal. This is both a personal and a global issues and this "barbarianism" must be stopped. I will be praying for Henri and all the people of France.