Just because we aren't in France doesn't mean we can't enjoy some delicious pastries.
Earl and I had a day off simultaneously, so after a 7-mile run this morning, we drove down to German Village to Pistacia Vera, a bakery that sometimes seems French. 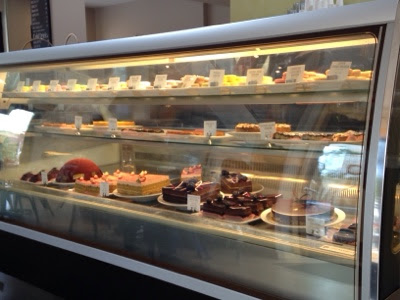 Earl and I decided to have breakfast, splitting a chocolate croissant and an oranche brioche. Both had terrific flavors, although the bread seemed a little denser than I would have found in France. 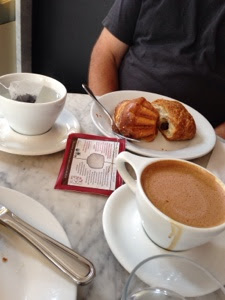 I had a mocha to go with my morning bread, and the chocolate in the mocha tasted so rich and dark; it wiped out a lot of the sweetness, but fulfilled me in another way. 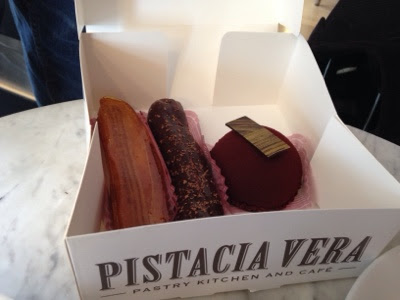 We bought a box of pastries to go. A chocolate bombe, which has chocolate mousse under the shell, a creme brulee eclair, that has a hard shell on top, and a traditional eclair for Grace after she comes home from work.
At the last minute, we also ordered a raspberry truffle torte too. No picture of that.
Sometimes, we need to treat ourselves, even though we aren't in France yet.
Good thing I ran 7 miles, cause I've eaten enough calories to make up for it today.
I can't wait to move to France and be close enough to a bakery, a patisserie for French treats that are much less expensive than these.
at October 01, 2015

I love German Village, but I've never been to this spot! My favorite is a gallery -- Helen something, on a corner. Really wonderful mix of beautiful things and they'll wrap anything for you, too. You remind me it is time to visit friends and family in Columbus! (And area) -- And visit before the snow falls while the driving is good. I think I have a few weeks! Now you have me craving lunch at Morgan House or tea at Biddie's!

Jeanie, I haven't heard of the gallery or Morgan House. I'd better check those out. Hopefully we have a few months before snow. Thanks for visiting.

Hi Paulita, Lovely to go out for breakfast , especially if you have a bakery like this. I went out for breakfast today (and lunch) with my good friend from my village. But I had Scrambled eggs with a bagel and for lunch , we had Red pepper and tomato soup with a roll, it was delicious. More of a savoury person but I do try sweet treats.

Anne, So glad you had an outing to enjoy yourself. It does sound yummy.

Beautiful and sounds yummy. Good for you.

The gallery is in German Town -- Helen Wine-something? I wish I could find the little box with the earrings I bought (she has great stuff from lots of artists). If I do, I'll let you know. Morgan House and Biddie's are both in Dublin. My friends live near something called the Josephina just off 23 and a little north of downtown Worthington and Rick's cousin in Lewis Center so it's a fun destination for us! Maybe if I get down we could meet for tea. Or croissant!

Jeanie, Sound lovely. Let me know when you come this way.