I returned from my run this morning as the sun had just started to rise. I held a package of three toothbrushes that I stopped and bought at the grocery store as I got near mile five. Then home again to make it six miles.
(Yes, we had an emergency need for toothbrushes enough for me to buy some during my run.)
As I opened the back door from the crisp morning air at 7:40 a.m., I expected to smell coffee and to see Grace in the kitchen.
She must be running late, I thought as I headed toward the bedrooms and bathroom. But my nose didn't pick up the scent of her shampoo which usually emanated from the steamy bathroom.
I saw darkness in her room and I stuck my head in to see her still in bed.
"Grace, it's 7:40," I told her.
"What?" She looked up confused and stunned.
She got a new phone Friday night and apparently she didn't get the alarm set for Saturday morning.
As I'd left the house an hour before, I thought I heard her alarm going off. We later figured out it must have been from her old phone, which lay on the dining room table.
Oops.
Since she had only 20 minutes to get ready and drive to work, I fixed some coffee and an everything bagel that she could take with her.
She texted a few times about how gross she felt, but I told her to shake it off.
I spent the rest of the morning grading papers, but when I finished, I had a satisfying hot shower, unlike Grace this morning.
I feel like Grace might have given this look much of the morning. 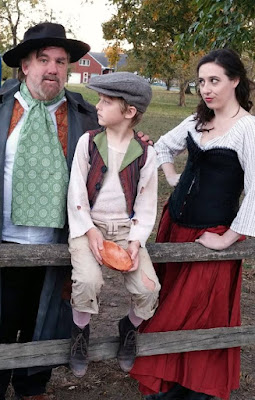 She's appearing as Nancy in the show Oliver next weekend. She gets to sing the song "As Long As He Needs Me."

Ha! Too funny. Break a leg Grace. That's always so hard to say.