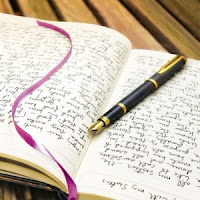 This is part of the Writing Resolutions blog hop by Meg Waite Clayton.

I'm a writer. That's what I've always said. And after this year, I have the book in hand to prove it. Throughout the year as I'm teaching college classes and going to my children's activities, I have excuses about why I'm not writing more. I'm busy. I'm tired.
But truthfully, if I'm a writer, then why aren't I writing more?
When I was a little kid, I'd start out early in the morning with my notebook in search of adventures that I could write about. I spent hours writing.
Now, I can be distracted by the slightest computer game or Facebook post.
If I love to write, if I'm a writer, then why aren't I writing more?
One book does not a writer make. True, I have two other completed books that aren't published, but am I finished? Are those all the stories I have to tell?
I don't think so.
I'm in the process of writing three books. Why doesn't one of them call to me as I'm lying in bed in the dark of the morning? Why doesn't one of them drag me away from the treadmill on my morning run, or pull me away from the soul-sucking television where I collapse in the evening?
I need to make writing more of a priority because once I'm in the midst of it, I love it. And having people read and respond to my words thrills me.
Here are the three books I'm in the midst of:
A Charm of Finches: 25,000 words is about Maeve, a slightly agoraphobic 34-year-old who decides to change her life with feng shui.
An American Nanny in France: 25,000 words is a nonfiction account of my experience with a French family while I acted as nanny to their American granddaughters, staying in Corsica, the family estate near Bourges, and their suburban Paris apartment.
Autumn in Aix: 26,000 words is a sequel to my published novel The Summer of France. The story of Fia and her teenage twins continues as they adjust to life in France and learn that World War II was not the only time art was pilfered in France.
So why aren't I writing?
I tried to figure that out this morning as I was lured away from my Microsoft Office document by the game Chuzzle.
I think I'm stumped in all three books. I've written some good parts and I'm kind of stuck in a lull. That's why today I gave myself permission to write the parts that I want.
I know some of the good scenes that will happen. So I don't have to write the boring parts or the connecting parts that might be cut later anyway. I'm going to write the scene where Maeve gets stood up by the librarian and plunges back into her fear of leaving her apartment.
I'm going to write the scene where a man follows me throughout the streets of Paris until I duck into a church and sit next to a nun to avoid him.
I'm going to write the scene where Fia reunites with her handsome Frenchman Christophe at his new job in the Louvre, recovering France's stolen artwork and begins to wonder if that Iraqi man she dated is up to something sneaky.
I'm going to write the compelling scenes and move on from there.
Since this is a resolution, I guess I need to make a stronger promise than that I will write the scenes I'm excited about. I resolve to write at least five days a week and to write 7500 words per week. I hope my estimates are low. I hope that once I'm back in the groove of writing, I won't be able to stop after 7500 words or five days.
Now which one do I turn to first?
at December 27, 2012

Sometimes starting is the most difficult part of writing. I'm all for writing the scenes that you are excited about. I wrote my last story by bouncing around from scene to scene, writing whatever felt right when I sat down to write. Good luck with your goals!

I think writing lulls happen to even the writer-aholics. I wouldn't worry on it - Not to mention, You Are a Writer, and an Author at that! Which speaking of... about this book...

It sounds interesting!!! Which means I'm adding this one to my to-read list. Don't be surprised to find me reviewing it... Happy New Year.

...stopping by from the blog hop.

You sound like a true writer! Pushing through the tough spots is sometimes the best (and worst) part, right? Thank you for being so candid.

Best of luck with the new scenes and the goals!

As I am writing this post on your blog, I could be working on my own novel. But I feel strongly that putting effort and giving attention to others work and struggles also aids us in our own writing. Funny, we are at a similar place, I have a scene in my book that needs rewriting and polishing and that is hanging out there, waiting for me to settle in my chair, and sit before the computer, and “be with it” and “work with it” ̶ until it flows. I will do just that after I visit a couple other blogs on this blog hop.

Keep at it as I will too!

Should you like please visit my blog and Writing Resolutions 2013, maybe there is a kernel of insight there for you?

Here's a nudge Paulita, to support your writing flow: I added The Summer of France to my wish list. I'll buy it when I receive the promised gift of a new Kindle Paperwhite - the dang things are out of stock locally. Flitting around your site, I have no doubt that you can finish your other books soon.
I don't have your track record, but still expect to keep my resolution to post 52 Ways to Stop Pedophiles on http://vagilantes.com/ during 2013.
Let's plan to have a little net-buddy rest a year from now. We will have earned it.

Sounds like a great resolution; I hope it goes well for you!

You are a writer - remind yourself everyday and also allow yourself to be human. You need to keep balance in your life, so you are not only a writer. You fill your life with other experiences, and that's what makes you a good writer. Best of luck in year 2013.

I can so relate to what you're saying and asking yourself. As writers, I think we all slow down once in a while whether it's a conscious effort or an unconscious urge that takes hold.

We gravitate to other things for a while, especially as women. We are creative and expansive and simply because we're not putting pen to paper or hands to keyboard doesn't mean that somewhere in our depths, we are not still creating stories and unique ways of looking at things, or of putting ideas and words together. They eventually will come out.

When I go through periods like this, I sometimes do research, work on small bits of text or dialogue, read a lot, write on my blog, or just spend time commenting on social media sites....anything that involves words and ideas.

Thanks, Paulita, for this reminder that we are all writers, despite the ups and downs of our relationship to our work. Best of luck in the new year. All of your projects sound fascinating and I look forward to reading more!

And thanks for checking out my blog as well. Here's to keeping the conversation going!
http://coldmountaincollective.com/2012/12/27/resolutions-of-the-written-word-lessons-in-sustainability/

As others said in the comments above, we all go through dry spells. I thought to myself last night that I need to write down the scenes that I know I want to be part of my story and go back and fill it in. Often when I do that other parts come to me and I get on another roll. It's hard to push through sometimes, especially with so many other things going on in our lives. Stick with it. Stop by my blog as part of Meg's blog hop when you can please. You can find it at http://soniafogal.blogspot.com Happy 2013!

I can't tell you how nice it is to hear someone else going through the same struggles that I do every day. So why am I not writing? Excuses, excuses, excuses, right? Thank you for putting this out there, it is a brave thing to admit. I must also dedicate more time to writing! Best of luck in 2013!

I'd love it if you'd like to visit my blog during the blog hop:
www.danyellecoverbo.com