Out With the Old

I guess I forgot.
In all the planning and the lists and the shopping, I didn't stop to think that my 6-foot, 4-inch son might be scared about this new adventure he's leaving on. 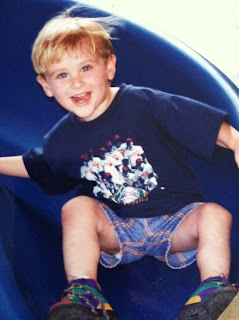 Last night he came home from work and walked into my darkened bedroom to kiss me goodnight, as he does every night since he started staying out later than I stayed up. This time though, he stretched out beside me and told me how sad he felt about leaving everyone behind -- his friends, his job, his co-workers.
"Everything's going to change," he said.
And I couldn't deny it. Life is going to change for him and all of his high school buddies. They might be together again, but it won't be the same.
A lot of his friends opted to go to Ohio University. They'll all be there together, moving their high school clique to a bigger venue. He's going 16-hours away by car, only two hours by plane, to Florida.
And as he submitted his summer essay, took the alcohol training, and ordered books for classes, it all seemed like so much planning. Then as he hung out with his best friends on Sunday and said goodbye to people at work on Monday, the reality began to sink in. 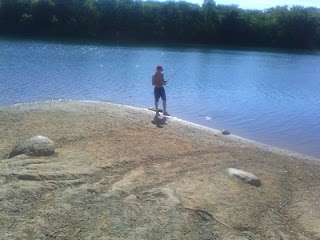 He felt sad all day Monday, he said, while he sat fishing with his dad and brother.
We talked for awhile, lying in the dark bedroom. We talked about the regrets he had from high school and some goals he had for college. I urged him not to focus on the regrets.
"The mistakes are part of what make us who we are. You don't want to erase all of the mistakes because you learn from them," I told him.
"I'm going to miss you," he said. "Who will I talk to if you're not around?"
And it's true, I'm the one he turns to when something really deep is bothering him.
"You can still talk to me," I promised, "but you'll make friends and maybe find someone you can confide in." 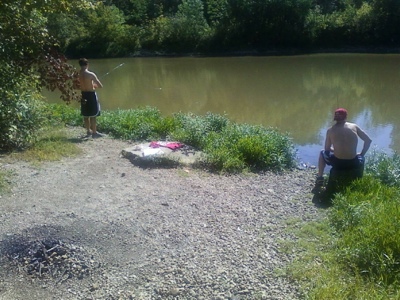 Then I hugged him and thought that the hugs are the things I can't send through the phone or through Skype.
at August 08, 2012

I barely see through my blurry teared filled eyes .... because it's all as it should be. My heart goes out to you all. What a beautifully written post.

It is scary and sad. I remember how homesick I was when I went to college out of state, but it passed.

My son is now 25 and I remember the day he left for college like it was yesterday. How grown-up but still a little boy. The best part of it is that it does go by quickly and it will be Winter Break soon and it will feel like he just left.

I still cry when my leaves, and wonder who is he going to talk to! I think boys are in a tougher situation than girls. At least girls have their "girlfriends," but boys "have to be careful" who they are vulnerable with.

It will be tough but it is part of growing up. Good luck to him. Take solace in knowing that you raised a fine child who is turning into a wonderful man. I can tell by your post!

Leaving home for the first time is so very daunting - for family life to be going on and you not there .... until the new life experience kicks in and becomes comfortable. I wish your son every success in his future life.

This made me cry! My youngest will be graduating this year and I dread the moment he leaves home. Hugs to you and to your son. I know he will do great!

The relationship you have with your son sounds so special. I can only imagine how tough it is for you guys. I hope the transition is a smooth one!

That breaks my heart!! How sad that he will be that far away but how wonderful that you are so encouraging and have such a great relationship together. And thank goodness for modern technology that you can communicate easily!

My three boys all went to college within 2 hours of home and it still killed me to drop them off. It does get easier though and you get a new "normal". We even began to enjoy our new empty nest last fall and then our youngest return home. And then our middle son returned home. I don't mind though and am glad to have them around. I know it won't be for long.

I hope your son loves his college experience and I hope you will be OK too. :)

It will be hard at time but it will also be an adventure. How fortunate for you to have such a good relationship with him.