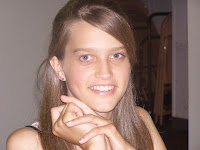 Since my friend Sheila, who apparently never plans to blog again, has not written about the excitement in her family, I'm co-opting her story. Maybe this will convince her to tell the story in her own words.
Her 16-year-old daughter is about six-feet tall, all arms and legs and swingy caramel-colored hair. She was on a school trip, in an airport in Colorado when a woman approached her and asked who her teacher was. The woman left a business card with the teacher and requested that it go to the girl's parents. She represented a modeling agency! I know! Every girl's dream is to be discovered in some out of the way place by a modeling agency who wants to make her a star. And apparently, this may be happening to Sheila's daughter.
Since Sheila was out of town at the time, the teacher gave the card to her husband, who considered throwing it away. But he didn't! He looked up the agency on the web, he called and talked to the owner.
Next week, they are going to a large midwestern city for a photo shoot.
Oh, I hope Sheila wants me to serve as her translator when they go to Paris for fashion week!
at May 17, 2009

I have been meaning to blog about this. As a matter of fact I planned on blogging through our whole journey into the modeling world than when Beth becomes famous I can turn it into a book. Nothing like profiting off your children. :)

Even better, I can profit off your children in case my aren't profitable!

The day after my birthday and not one comment. It's all about you isn't it.