In many ways, the rules have gotten stricter here in France. We're only allowed to leave the house once a day. We have to take a paper that says we are going to buy groceries or medicine or to help someone who can't go themselves. But the main reason I leave my house is to exercise each day, usually a run, but sometimes a walk.

I'm allowed to walk with people who live in my house, but no one else.

It's been nearly a month since we raced over the border to Barcelona to pick up Grace and Jack. Even then we were social distancing and the next morning they closed all the bars and restaurants.
I've been to the bakery a few times
and the grocery store twice.
The stores limit the number of people who can go in, so sometimes the longest wait is outside before you can get in.

I've talked to friends from our balcony and over fences.
I'm not sure if Grace and Jack feel lucky to be stuck here, but I'm really glad they are. We have four hands for euchre. And just last week I received a mahjong set, so we can play three or four-handed mahjong.
What else are we doing to pass the time? Well, as soon as the quarantine started, I caved and we ordered a television.

We rarely watch television in France so I had argued that we didn't need one; we could simply watch shows on the computer during cold winter nights that we weren't out with our friends drinking wine, dancing, telling stories.
But realizing that the four of us were going to be inside, except for an hour per day of exercise, I immediately went on Amazon and ordered this 43-inch television. It isn't a show stopper, but gives us something to do on nights when we aren't playing cards or mahjong.
Our dinners have drifted later, usually starting around 8 p.m., so there isn't a lot of time afterward to watch TV.
My life remains much the same. Working most days teaching English to Chinese kids. The hours are longer because they aren't in school so can take classes anytime of day. I'm scheduling two days off every week from teaching. I considered continuing to teach everyday since we're quarantined, but I realized that I need a few days where I can go for a leisurely walk and not rush to shower and get dressed, a day where I can linger at the breakfast table over coffee. So I'm allowing myself those days off.
I'm also teaching an online university class and am lucky enough that another one starts in May. I take two days off from being online for my class, but unfortunately they aren't the same days that I don't teach the Chinese children. The only day that I don't work at all is today, Wednesday. And it feels like a bit of a vacation.
I know I'm fortunate to still be able to work, so I won't complain about it.
A few restaurants are open these days for take out, so that is a nice break from someone cooking for 21 days straight. We had galettes last Friday -- those are savory crepes, with a delicious bottle of hard cider.
Maybe we'll try the Vietnamese restaurant next or the pizzeria so Grace and Jack can experience some local eateries.

We have also committed to getting a kitten. 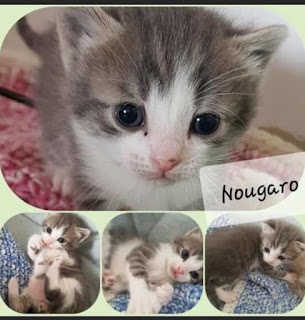 Nougaro, who we are currently planning to call Nougat, will be ready for adoption in mid-May. Grace has been having withdrawal since she can't have her cats brought over. We've always had cats so decided it might be a good time to get one. He comes from a local animal rescue organization.

That's our life in quarantine. We'll continue to take walks and look at beautiful scenery. Hope you're all being safe and stay healthy.

Nougat will give us all delightful experiences as you raise him. People forget that raising a kitten is a full time job for a while. He will also bring hope to our hearts - nothing like a new life to renew joy!

Just Me, Yes!
Sillygirl, You're right. It will definitely give my husband something to do, keeping the kitten out of trouble. Also, I feel a bit resentful of people who offer a nearly year old cat, thinking, you got all the fun of a kitten and now you're ready to pass him on. I'll eat those words, no doubt.

We are trying to do one night of takeaway food from a local restaurant every week in the hope that the restaurants will still be there when this is all over!

Glad to hear you're okay over there. The news sometimes makes things sound very dire indeed. Australia is doing pretty well considering. I think we closed our international borders in time, so that community transmission doesn't seem to have become a thing here.

Hello, everyone! I,m here to explore blogs and forum about the wonderful and most safe cure for (Herpes Virus).I was positive to the deadly virus called herpes and i lost hope because i was out casted and rejected even by my closet friends.i searched on-line to know and enquirer about cure for Herpes and i read someone testimony on how he was cured from Herpes so i decided to contact the same herbalist because i know that nature has the power to heal everything.i contacted him to know how he can help me and he told me never to worry that he will heal me with the natural herbs from God!after 2 days of contacting him, he told me that the cure has been ready and he sent it to me via DHL and it got to me after 3 days!i used the med as he instructed me (MORNING and EVENING) and i was cured!its really like a dream but i am so happy!thats the reason i decided to also add more comment of Him so that more can be saved just like me!and if you need his help, you can email him on nativehealthclinic@gmail.com, or whatsapp +2348140073965 I,m neme amber and you can get in touch with me via nemeamber@gmail.com..Contact him for help at Herpes virus HIV/AIDS CANCER COPD BRAIN TUMOR All kind of virus and disease //...