Today, after four years of dating, our daughter Grace and her boyfriend Jack made it official. They're engaged.
We're very happy for them. Their love for each other is an inspiration. Neither of them is perfect, but it looks like they found their perfect imperfect partner. And they've weathered some tough times together.
They met four years ago in May when they both were in a production of Hamlet. Grace was dating another guy on and off and I was kind of rooting for him. I jokingly called Jack by the wrong name -- Josh -- for awhile, before it became obvious that they were serious.
After a year of dating and some frustration about finding time to see each other, I suggested they just move in together. They are both always involved in acting, usually in different shows, so after work, they'd rehearsal, and they rarely had time to see each other most evenings. At least if you lived together you'd know you would see each other eventually, I said.
They spent two summers apart while Jack was in a show that required him to live on premises about 90 minutes away from Columbus. 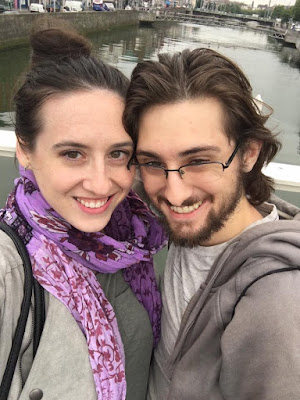 They have traveled together, exploring Scotland, Ireland and England. They visited Jack's family castle in Scotland -- the MacRae Clan and discovered that the castle wall says as long as a MacRae is within, a Fraser will not be without. Our family clan? The Fraser Clan. Perhaps this love story was written in history.
People always ask if a guy is someone you approve of for your daughter. My standards have always been high. There is one requirement. That he love her with unbounded love. And I think she has found that in Jack.
In fairy tales, a wedding is the end of the story, but we all know that a wedding is really the beginning of a whole new life for the two of them.
at July 12, 2019