During the hectic holiday season, my nephew Michael and his wife had twin boys.
Michael is in the Navy and Morgan has been in the Army Reserve, but recently had to take a leave of absence because of their daughter's medical issues.
These two already have a lot on their plate before the twins arrived. Their daughter Lydia, 3, has seizures that have interrupted her development. She doesn't talk at all but she's very sweet and goes to some amazing specialists to help her accomplish as much as possible.
Their daughter Lorelei, who turned 1 in August, is a pistol.
And then on December 18, they had Liam and Lukas. Liam, only 4 pounds, came home just a few days after he was born, but Lukas, weighing in at 6 pounds, had some breathing issues so he stayed in the hospital until this week. That's a long time for identical twins to be separated.
Apparently, the boys are glad to be back together.
Here's a photo that my sister-in-law sent of the twins with their dad, my nephew. 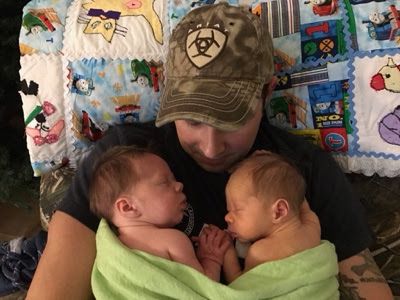 My mother made the baby quilts behind them.
Hoping for healthy children and an easier life for Michael and Morgan in the months and  years to come.
at January 04, 2017

oh how beautiful they are and so precious, they say that God only gives us as much as we can cope with, your Nephew and his wife must be very strong people and they will manage with it all, very good luck to them

Roz, Thanks. I think he has given my brother and his wife more than they can handle with four grandchildren in three years!

They're so cute! Three cheers and best wishes to all!