I saw a newspaper article about a new television series and it sounded fun. So I DVR-ed it. The show is on TVLand, which I never watch. I didn't even realize it had new shows. I thought it only showed reruns from the 60s and 70s.
But this new show is delightful. It's called Younger. And the premise is Liza, a woman in her 40s who 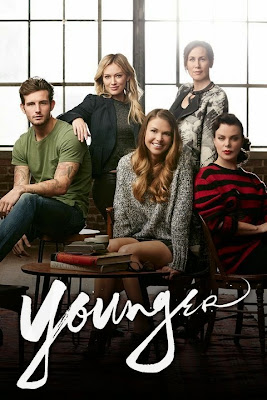 worked in the publishing business but gave it up to raise her daughter and move to the suburbs. Now she's getting a divorce, her teenage daughter is studying in India, and she can't find a job because she is too qualified.
When a younger guy hits on her in a bar and says, they're about the same age, 26, she decides to become a 26 year old. She changes the way she dresses and speaks. She has highlights. She wears knit caps for no reason, and she gets a job as an assistant to the marketing director in a publishing house.
Each week when I watch the show on my DVR, I wish it was longer.
I'd never heard of the star, Sutton Foster, but my daughter Grace knows her as a Broadway star. I 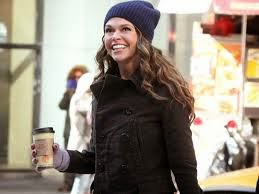 looked her up, and she is just barely 40. Still, she carries off the 26-year-old thing pretty well.
She keeps getting caught in her own timeline lies, like when she confides to her 26-year-old boyfriend that she lost her virginity after a Nirvana concert, and he asks her if she was in elementary school. (See Nirvana broke up after Kurt Cobain died in 1994, and if she is 26 now, that means she was born in 1989.)
And the first time she went to the gym with two of her co-workers and got undressed, she realized her pubic hair looked nothing like the well-plucked girls in their 20s.
She knows nothing about social media and has to learn it all from scratch.
When she interviews for her job, she nails it when the marketing director asks her what makes her special. (Apparently, that's something that all 20-somethings think, that they're special.) Liza responds, "I'm a grown up. I don't think I'm special." Love that line, but her 40-something is showing.
It's fun to see how Liza gets herself out of each complication. But I'm not doing it justice.

Only two episodes left until the end of the season, so watch it. Set your DVR to Tuesday night at 10 p.m. on TVLand. Bet you'll laugh along with me.
at May 28, 2015

I remember her in Bun Heads. I was very impressed. She can be very funny. I hope I manage to see it somehow.

I'll have give it a try. Cute concept.