All three of my kids are smart. Grace has a terrific memory; she excels at writing, literature and, at one point, understanding DNA. Spencer was always a math hound who loves history. He wipes most people away at chess, as he sees the board and all it's possible moves. He can tell you pretty much every play he ever made in every game in his high school basketball years.
Tucker, my youngest, was the most well-rounded. In addition to an excellent 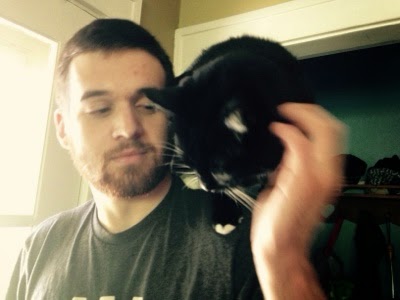 memory, he had a good balance of reading, writing, and math. He loved history and created fun stories in journalism. He took mostly Advanced Placement classes his last two years of high school. He understood how to succeed in school. He got they system in a way that Grace and Spencer never did after all those years of homeschooling.
Last year, when we went for his annual checkup, the doctor asked what colleges he was thinking about. He told her he'd been accepted at Pitt, University of Missouri and Ohio University. The doctor turned to me and said, "It doesn't matter where he goes; He'll be fine."
And I agreed.
School was pretty easy for him.
Then college happened and things seemed to go downhill quickly.
Circumstances lined up against him. He started having panic attacks in the summer. Then he had his wisdom teeth pulled the week before he left for college. They became infected the first week he was there.
He came home nearly every weekend for doctor or dentist visits.
He also had a steady girlfriend who was still in high school, so he came home regularly to see her.
Living in the dorms did not agree with Tucker.
He had three roommates. One of them was his best friend, Josh. The other two were also friends from home. With four guys in the room, Tucker never had any alone time. As an introvert, he needed alone time to restart his engines.
At my insistence, he took his guitar alone to school. At home, we would frequently hear him playing the guitar in the basement. At school, he took it out to play only once, when another friend begged him to play a song.
All of these circumstances, plus some apathy since he didn't know what he wanted to do, caused him to end up with bad grades in almost all of his classes.
We agreed to let him come home in December and take classes at the local community college.
He signed up for 4 classes, and yesterday I asked him how his grades ended up. He only passed one of those classes.
None of them were too hard for him. He had Calculus in high school and failed an Algebra class in college. History, one of his passions, he failed too. Economics joined the dominoes of failures.
So after a year of college, he has two classes that he passed.
I don't even want to add up the amount of money we paid for those two classes.
This summer, Tucker, 19, is signed up for a welding class.
I don't think he'll like it. He has never been the kind of guy who played with Legos or built things. But we're giving him a chance. He can earn a two-year degree in welding at the community college.
This class is his final opportunity with us footing the bill though. He'll need to do well in this class for us to help pay for the rest of the welding classes.
And if he decides he wants to go back to college in the future, he'll be responsible for the tuition there too.
That's a hard choice, because we've paid for college for Grace and Spencer. They've taken out the government loans available to them and we've paid the rest, taking out some loans ourselves.
But Tucker's choices force us to draw the line.
While he's in school, we're paying his rent, but if he's finished with school then he'll need to pay for his own apartment too. Not to mention his phone. When do we stop paying for his contacts and his monthly medicine too?
I'm not sure, but I know he's going to face the real world much sooner than the other two did.
I'm not counting Tucker out as a failure. He has just chosen a different path.
Tucker and a friend have started a landscaping business. They're working quite a bit and that could turn into a money maker for him. I fully support him in becoming an entrepreneur, and maybe he'll be the most successful of all of our children.
I just never pictured any of our children not going to college, and especially not Tucker.
at May 20, 2015

I mentioned my nephew who lost his mother almost 2 years ago at Tucker's age. I understand what you're going through. My nephew is floundering too. He lived with his mom and step dad in a small town and then went to live with his dad in a big city. It is so tough on the adults around him as well as we struggle with what to do.

Jackie, Yes, thanks for the affirmation. Hate that it's happening to your nephew too. Basically, we have to wait for them to make decisions, I think. It's definitely hard.

Your son's story sounds so much like our youngest. His first semester of college was the worst for all of us! He is now 24, working as an assistant manager in the grocery business and loves it. He is now ready to continue his education. We feel bad now that we forced him to go to college right out of high school. Hindsight.

Nise, Thanks for your story. That helps too. I find that I'm having a really hard time sharing with my acquaintances too. Since I teach college, everyone has those college expectations.

Not everyone takes a linear path Paulita. I certainly didn't. I went to uni for a few years straight out of school, but then dropped out, went overseas for a few years, then came back to Australia. After realising the kind of job I could get without going to uni I went back to uni. I did finish a degree then, and have a professional job. He may never go back to education of course, but he may. We never do really know what the future will hold for any of us.

The kids that don't take to college and fly right through have it the toughest. They have creat a path of their own in the face of of what everyone else thinks of as 'failure'. But the true failure and nothing to be ashamed of is the ability to see and value other pathways as much as college right out of high school. Sounds like Tucker could earn a degree at any point once he decides he wants one. That must bring you some pride. I wish we could come up with another word for not going straight to and through university other than 'floundering'. It takes a lot of courage to travel that road. You guys sound like wonderful parents.

Thanks, Louise and Just Me. Sharing my worries helps a lot, and your encouragement means everything.