The Challenge of Raising Impetuous Children

I've been thinking about my son Spencer a lot this week.
From the moment he was born, that boy has been barreling through life. He rarely stops to think through decisions, which makes him a great guy to hang out with, but a little harder to parent.
Just on Friday we had a nice talk. He wanted to put down a deposit for a house that he will move into in June. This all came about quickly on Wednesday, and I suggested maybe he should go talk to someone (i.e. a counselor) about his decision-making processes.
"I don't want to talk to someone about my feelings," he complained. He said he shares his feelings with his friends, and they all give each other advice. I reluctantly pointed out that a counselor might have some different, professional kinds of advice.
Someday, Spencer will probably invent something fabulous or lead a revolution. He is never still. Even as a baby, he would toss and turn, flipping from one side to the other until...suddenly he was asleep. And I'd know he was asleep because that's when he'd stop moving. 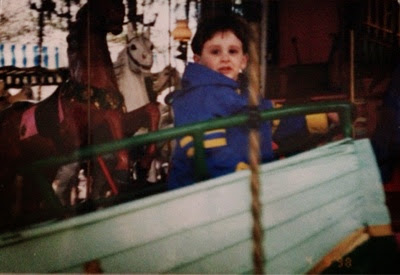 As a 4-year-old boy, I remember walking through a Medieval French village with him. He stood at the bottom of a stone wall, sized it up and decided, yep, he could get over that wall. So he started to climb it.
That's the kind of kid he is. He rarely sees something that he thinks he can't tackle. 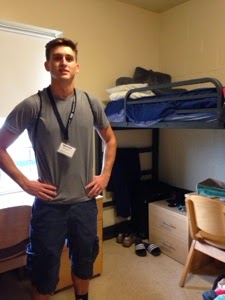 In the photo above, he's on a French merry go round, one that firmly says no switching horses during the ride. Every time that carousel rotated, Spence was on a different horse, animal, or boat. He just needed to try everything, even when the French attendant wagged his finger at Spencer warningly. Spencer just grinned his irrepressible smile and raised his eyebrows.
He is the kid who, at times, I most like to be around. He's sensitive to my feelings. He asks about my thoughts. But he's also the kid I most dread getting phone calls from because he often lands himself in hot water.
When he gets himself in trouble, I feel such a gnawing in the pit of my stomach -- that fear that maybe this time he won't be able to bounce back. After a day or so, I can see with more perspective that we'll all be okay. Things may not go as we planned, but nothing is irretrievable.
at September 14, 2014

My eldest son was like that , all over the place , knew what he wanted and was going to have it , no matter what I said .. so I let him get on with it, , we had ups and downs, and yes the phone calls. He was in a spot of bother once, but I left him to sort it out , he is now a sergeant in the Air Force.

Anne, that's encouraging. I know he'll come through it all.