How A Childhood Book Affected My Life

I had an epiphany yesterday while on Facebook. It wasn't the usual epiphanies, like the fact that I'm wasting a lot of time on Facebook.
I was reading my friend Tracie's post about the top 10 books that changed her life. From The Mixed Up Files of Mrs. Basil E. Frankweiler by E.L. Konigsburg as number 4 on her list. 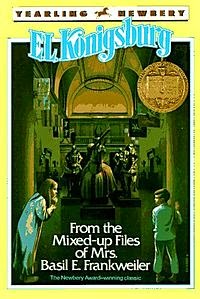 She listed
I commented that I loved this awkwardly titled book. If you don't remember it, it's about Claudia, a middle class girl who lives in the suburbs of New York and decides to run away and hide in the New York Metropolitan Museum of Art. She ends up taking her little brother along.
I can't remember what was going on in the girl's life that made her want to run away, but I remember the awesome adventure that she had as she and her little brother figured out how to hide in the museum each night then decided where they would sleep. They collected coins from the fountain and ate out of vending machines. A new exhibit of a statue (from Mrs. Frankweiler's collection) that is believed to be a Michelangelo intrigues the whole city. Claudia and her brother Jamie are intent on determining whether the statue is really the work of Michelangelo. They end up visiting Mrs. Basil E. Frankweiler, and she lets them research in her files before the kids return home in Mrs. Frankweiler's limo.

As I reminisced about this childhood book that enriched my normal Midwestern  life, I realized I'm still trying to achieve the goal of escaping on an amazing adventure.
Sure, I've had adventures. I went away to college and to grad school, landing in Kentucky, Ohio and Washington, D.C. I moved away for a job in Florida, and turned down jobs in New Orleans and Las Vegas.
I worked as an au pair for three months in France. My husband and I have traveled to Europe several times.

But still, I don't have that clandestine adventure like 12-year-old Claudia. That's probably why I wrote the books that I've written. As a matter of fact, The Summer of France seems similar in so many ways. The family escapes from their Midwestern life to run a bed and breakfast in France. The main character Fia learns that her great uncle has a hidden secret from World War II, and she must help solve the mystery and save her uncle from danger.
Clearly, From the Mixed Up Files had more impact on me than I remembered until Tracie listed it on Facebook and reminded me of the joy the story brought me.

And my other two novels are also about people escaping. In I See London I See France, Caroline sells her minivan and takes her three children to Europe in search of the woman she was during her the European adventures of her college days. And in Trail Mix, two women whose children have gone off to college find themselves without a purpose, so they take off on an adventure to the Appalachian Trail.
Maybe my initial reaction to any problems or changes is to take off an adventure, to change the scenery and hope the problem fades. Perhaps that's why my husband and I plan to retire to France, picturing a new chapter
opening when our parenting days are finished (mostly)
If you haven't read From the Mixed Up Files of Mrs. Basil E. Frankweiler, I highly recommend it. Who knows, it might send you off on your own adventures, or at least you can enjoy Claudia's exploits. And then maybe you'll give my novels a try, knowing that the characters go on trips and mostly end up learning something about themselves.

laudia resonated with a lot of us I suspect. Maybe that's why her story is still popular.
Your books are great adventures, too, just like Claudia's except they're for grown-ups. I always enjoy where you take me as I read your novels.

Thanks, Tracie. Books are amazing things, aren't they. I feel so sorry for people who don't fall in love with reading.

Well retiring in France sounds like the adventure of a lifetime to me. You certainly have inspired me along the way.