A big money preacher claimed that the rapture was going to happen on May 21 at 6 p.m. Gullible people sold their belongings and quit their jobs.
Surprise.
He was wrong. Again.
On Sunday we had a rumbling thunderstorm go through. Grace and Tucker decided to make an ice cream run. My phone rang.
"Mom, you have to look. It's a double rainbow that goes all the way across the sky," Grace said.
From my front porch, I could only see portions of the rainbow. 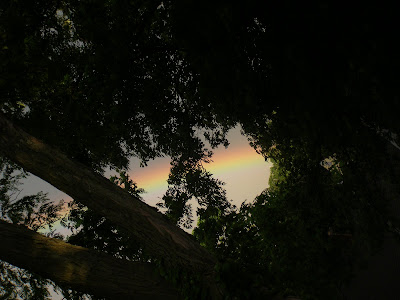 I guess I was too close to it and the trees were in the way. I went from the front porch to the back yard taking photos of pieces of the rainbow. 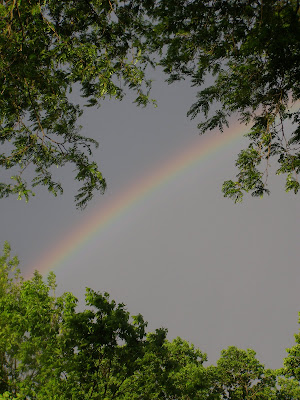 Our neighbors were just pulling in from a trip to Wisconsin. They said they followed the rainbow home, getting closer and closer until they felt like they could grab it.
I thought maybe it was a gentle reminder from God, not the one who encourages people to protest with signs that say: "God hates_____ (fill in the blank)." But a God who promised:

And the bow shall be in the cloud; and I will look upon it that I may remember the everlasting covenant between God and every living creature of all flesh that is upon the earth. 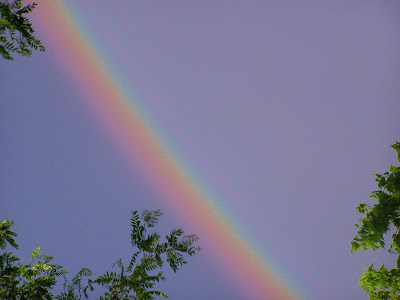 That must of been one huge rainbow ♥ the last photo looks like the very end of it , has the shape in bending inwards. :-)

Hmmm, Anne, do you think I might have flipped the photo in the wrong direction?

Nothing prettier than a rainbow. I've chased a few in my day.

I liked the idea of leaving empty clothes laying around as if someone had been raptured. Lol. Something I would encourage the kids to do. But seriously, I am so tired these days I may have welcomed the rapture