I lay in bed in the dark on Wednesday morning when Earl kissed me goodbye and drove into the frigid morning air. He returned at 3:15 a.m. Thursday morning to find me back in bed. He had driven for nearly 21 hours to Grace's college to fetch her home for Christmas.
Grace hugged me and scooped up the cats. The younger cat just looked confused. He doesn't have a very long memory and can't recall that another person lives in this house. 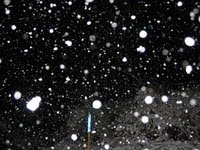 "That's too long of a drive for one day," I murmured as Earl climbed in bed.
"I know. I can still see snow flying at the windshield," he said.
We had searched the weather forecast, trying to find a day when the snow would be minimal. The entire week was supposed to be full of snow. The road to Grace's college follows the Great Lakes, which is always dumping "lake effect" snow on the highways and cities nearby. In Syracuse, they already had 42 inches of snow last week.
"Almost a white out in Syracuse but at least we're to Syracuse," was the message I received Wednesday evening at 7:05.
My entire day was a series of text message updates from Earl as he traveled there then Grace as they traveled home.
"In Pa." came the message at 9:40 a.m.
"NY" arrived next at 10:21 a.m.
"Roads clear but NY has plows parked and running in the medians," Earl texted at one point. He was impressed with the way they handle snow.
Grace's texts talked about a boy then about the drive.
I suggested they stop and get a hotel.
"Dad says it's not going to happen. We both feel fine. You've got a nighttime newspaper editor and a college student who has spent the last week and a half preparing for finals by staying up late and cramming. We're gonna be fine."
And they were fine, just tired, and, obviously, still in bed this morning as the boys stumble off to school.
at December 16, 2010

I'm glad they made it home safe, man this really makes you think about college distances. Kent state is looking better and better!

It's definitely something we should have taken into consideration for both the cost and the time. It probably cost about $200 in gas just to go back and forth. A hotel, of course, would have been extra

Lucia said...
This comment has been removed by the author.
9:13 AM

Good to hear. I am happy they are home safe. I hope you and your family have a wonderful Christmas.

Your area has really been hit with the snow storm. We get snow here too-not as much-and every thing comes to a stop. They aren't very well prepared for a lot of it.