One of my laments in the past has been "not enough family at holidays." This year, they made up for it. Mom and Dad came up from Florida and my brother Craig came from Texas with his 21-year-old son and 16-year-old daughter. They stayed with my other brother, Kevin, in Dayton, but last night everyone came to Columbus to watch one of Spencer's basketball games.
My family is very competitive. They always have been. Both my brothers play tennis so that is their main competition, but they don't limit it. They'll compete with my 74-year-old dad in ping pong, cards, and even who can eat spicier food. Neither of my brothers' sons got into high school sports. I wasn't sure how it would go when they came to watch Spencer play. I was also a little nervous that Spencer might not do well on the one night they were there. 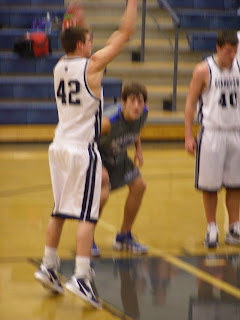 We sat, all 10 of us, in the bleachers watching Spencer give chest bumps to the starters. Spencer didn't start and didn't play for most of the first quarter. I was getting nervous. He usually gets into the game pretty quickly. The coach moves all the Varsity players in and out.
Finally Spencer got a chance to play.
I sat next to my brothers and they talked about offenses and zone defenses that were over my head. When Spencer blocked a shot, sending the ball back to the court, they whooped with glee. Craig kept track of Spencer's stats and typed them into his phone. He yelled loudly to disrupt the other team when they were shooting free throws. My brothers were proud of their nephew, and so was I.
I liked sharing that experience with my family, and realize now that the nerves before hand all have to do with living up to expectations. When it comes to sports, it's pretty much all enjoyable to my brothers and Dad. But it sure would have been worse if Spencer hadn't played well.
He scored 8, blocked 4 and rebounded 6.
I keep picturing my brothers' delight at the game. It's a picture that I replay in my head -- one that will pop to mind when I think about my brothers.
at December 30, 2010