Interesting that today in the Chris Brown-Rihanna case, the judge warned that the two of them must stay 50 yards away from each other. It seems normal that the judge would tell Brown, who was arrested on Feb. 8 for hitting his then-girlfriend before the Grammies, but the judge also took the time to explain to Rihanna that it's a two- way street. She needs to stay away from him. It's as if the judge wants to save this young woman from her worst inclinations, as if she knows that we women seem to repeat our mistakes over and over.

I have a friend who is repeating her mistakes. Sometimes we women follow the pattern so closely that it's eerie. She was married to a man who treated her badly. Oh, nothing like being beaten, but belittlement was a constant state. She had children and focused on raising them. She's a great mom. Then, when she stepped into the community and out of her mother role, she was wooed with words. A man enjoyed spending time with her. A man found her attractive. He found her interesting. She didn't cheat, but she realized that life had more to offer. She knew she had to give her daughter a better role model than a woman who was cowed and subdued by a husband. 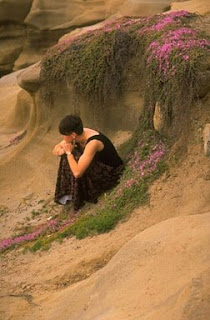 Within months of her divorce, she married another man, a man whose sole purpose in life was to make her happy. Before long, she was living with constant criticism. She couldn't do anything right. The house wasn't clean enough. Her children from the first marriage were too disrespectful. The hammer of condemnation hit over and over again. Enter another man, a man, who though far away, offers her support and admiration.
"I'm in a really good place with my life right now," she says, and believes it. Maybe that's the scary part. She thinks that's true.
I don't lecture. I was a chubby teenager and I didn't need anyone to point it out to me. I knew it. Deep down, she knows. But denial is sometimes a comforting place to rest. Maybe today is good and maybe it will stretch into weeks of good or months of good. And I'm happy for her. And when it's bad, I won't say, "I told you so." I'll want to protect her. I'll listen.
But I'll be tempted to remind her that this isn't a dress rehearsal. This is it. Our only chance and we need to live with joy while we have the chance.
at June 22, 2009

VERY moving post. I can tell you care and I am sure your friend knows you care too. She is lucky to have you because you won't leave and you don't require anything from her.

Friendship is a two way street. When a friend is sharing, most times my place is to listen. But from time to time I must also have a voice.

When I'm in a healthy place I can share from my own experience what has and hasn't worked for me and allow my friend to "take what they like and leave the rest".

I can relate to the pain involved in watching what appears to be the reliving of mistakes.

Sharing my experience and not advice (HARD TO DO) allows others the diginity of their own journey, choices and consequences. In the end, I have the be humble enough to realize (I HATE THIS PART) I don't have all the answers. This is the challenge the Universe is handing me.

Now if you would excuse me, I'm headed back to REREAD your post a few more times !!!

Thanks. You're right. It's important for me not to judge and I'm not good at that. She doesn't need someone else to tell her she's doing it wrong.

Thanks for not mtioning my names!

So I am the woman in this story from Paulita, and all she says is true. Denial, maybe, but with eyes wide shut. I am repeating some of the same patterns, true. I see more clearly this time though. To set the record straight, though, despite her fears Paulita does not judge me but opens those wide shut eyes to face reality occasionally. I could NOT have a better friend and never have. I believe that where If ind happiness, within the boundaries of my marriage, gives me the strength to change my marraige or change my situation. In the meantime I will happily in the eye of this hurricaine with the knowledge that someone out there loves me for me, not for my money, looks or "edgieness". That has value beyond belief.