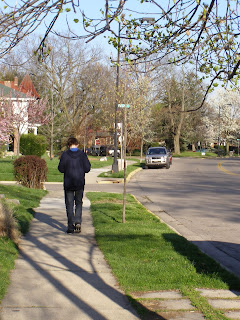 With Grace gone this week, it's just me, my husband, the two boys and the two male cats. Way too much testosterone in the house, except for the cats who are actually "its" now, but they are always weird.
Tucker will fight with me about everything, as if that is his goal in life. I took him to guitar lessons the other night. It's about 1 1/2 miles from home, but since he has to carry a guitar, I drive him and read a book while I wait. He wanted to stop by Taco Bell on the way home, but at 6, when his lesson is supposed to begin, he was still running around the house gathering things. He needed to grab his money for Taco Bell. I said no we had to leave. Argue, argue, argue. In the car, he continues to harangue me about why I wouldn't let him go get the money. We get to guitar lessons and I said he could just walk home because I didn't feel like waiting for him after he was so rude.
"Then I'm not getting out of the car," he said. "I'm not going to guitar. I don't want to walk home."
Aaaaargh! We were 10 minutes into the lesson and he hadn't gotten out of the car yet. I ended up driving him home, but there was no Taco Bell in his future.
Then yesterday, my husband who works very hard at home and at work, was frustrated by Tucker's constant presence on the couch in front of the television. My parents visited last week and introduced him to the Game Show Network. It's his new favorite channel -- Family Feud, Match Game, $10,000 Pyramid. "Get your clothes that are on the dryer put away," my husband said before leaving for work in the afternoon.
I sent Tucker to put away clothes when I was getting Spencer from work. This morning, I discovered piles of clothes still on the dryer. I woke Tucker at 8.
"Go get your clothes put away!"
"Wait, wait. There were two piles and I put away my pile," he said, working on a technicality that made perfect sense in his 13-year-old brain.
"But your clothes were in the other pile too. Go put them away."
Sometimes when my husband and I fold shorts or boxers, we might inadvertently put Tucker's in Spencer's pile and vice versa. Tucker figured he could benefit from other's mistakes. Maybe he'll make a good lawyer if he lives that long because I might strangle him before then. 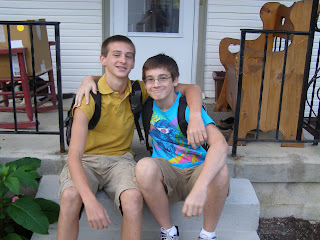 Spencer has been working a lot of hours as a lifeguard. He comes home with strange stories, like the boy the other kids call "Pepperoni Nipples." One day when it was raining and he was in the lifeguard chair, a mother came over and asked if she could have the umbrella from the chair. He was taken aback that an adult would ask for the umbrella when he was stranded in the chair and would be exposed. He suggested she go stand under an overhang. But when he got home, he asked just to make sure the adult was the one in the wrong instead of him.
Yesterday he was lifeguarding again. A family with four kids under five were at the pool. The little girl went down the slide that ends in the diving well and began to scream when she hit the water. She couldn't swim. Spencer jumped in the water to save her. Afterward, he had to fill out paperwork, which is standard when they have to "make a save." He asked the mother how to spell the girl's name and "she seemed really annoyed," he said. Maybe because that was the second kid from that family a lifeguard had to save that day. He is definitely learning a lot about the adult world while working as a lifeguard.
But, sometimes their boy weirdness takes a good turn. Tucker had watched The Cake Boss on TLC and wanted to bake a cake yesterday morning. So, after swim team, he found a recipe from the Joy of Baking for a white cake. I helped him get the batter in the cake pans before I ran off to get Spencer to work and then to a meeting at the College. When I returned home, I turned the first cake onto a plate while he made a buttercream frosting. We talked about how to ice a cake and what was causing all those crumbs under his knife. I put the excess frosting in a plastic sandwich bag and we added red food coloring. I slit the tip of the bag and he decorated. He started going for a smiley face then changed it to the Pringles man. I'm not certain I've ever noticed what the Pringles man looks like. Then he decided the Pringles man was a teenager and had zits, so he added red dots all over the cake, which makes it a little less appetizing. But it turned out delicious.
"Now we can eat cake and watch the Game Show Network," he declared.
And we did.
at June 17, 2009

Hmm.. Spencer's stories are very entertaining. I always thought it was teens that were so weird maybe its actually the adults after all. I love Tucker's comment that you can now eat cake and watch the game show network. And aren't you a great mom for doing that with him.

So I finally met the three girls that Daniel has been hanging out with (I went & picked them up on campus yesterday, after Daniel got the car towed) and within 30 seconds of being in my car one of the girls shared a Thanksgiving Day story of when she explained at the dinner table that she doesn't need to get her tongue pierced, she knows how to give a BJ with out the piercing. Then she thought it was funny how shocked her Gpa was. Dear God what has Daniel gotten himself into. Luckily that's not the girl he's actually friends with unfortunately, they always seem to be in a group. So maybe its a combination of crazy teens and bad parenting?

Wow! I will take my boys' more innocent weirdness, for now. I can't believe that girl thought the story was fine to tell at Thanksgiving or to you. She must be in it for the shock value.

So funny. I get that way, just arguing for arguing sake. Didn't realize I was behaving like a 13 year old. hmmm.