A toast to us -- two French homeowners. 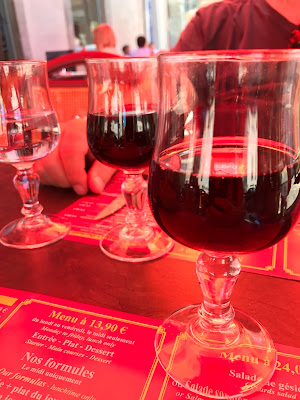 The email arrived Wednesday afternoon (so evening for the French) from the notaire congratulating us on the successful purchase of our new home.


I am pleased to inform you that I have now received your bank transfer and that your purchase has been completed and the deed signed this afternoon.

It was not the easiest purchase he has overseen, and in the end, as the closing day came and went on Monday, he had to step in with the banker to get the money sent. The French banker again had no urgency in sending the money.
We had wired the money July 30 from the French bank to the notaire. The banker sent us an email on Thursday, August 1st, saying only "I'm trying to reach you." No phone number, no identification of which bank he was at.
We responded immediately and did not hear from him until Tuesday, five days later.
Our French friend Cedric offered to help, and we forwarded him the email. He recognized the banker's name and knew which bank he was at. I will not share with you the names Cedric called the banker.
The banker finally responded to us with an email on Tuesday that said please sign this form. Neither Earl nor I could open the form. We forwarded it to our real estate agent in France. She couldn't open the form. We asked the banker to send us a form that could be opened but we heard nothing.
We sent a plea to the notaire to help. And he shot off an email to the banker, copying us on it.
The next morning, my only morning off teaching when I could have slept in, I prised my eyes open at 6 a.m. and thought I should check our emails to see if we needed to send anything to the banker. After all, it was already noon in France.
We did have an email. The banker had responded to the notaire. The banker said he needed us to sign something, or he needed the notaire to send a copy of the bill.
The notaire had responded with a copy of the bill -- coincidentally, the exact same amount I had attempted to transfer. It felt kind of like the two men needed to assure each other that I had done the right thing.
Earl and I froze in indecision. Did we need to do anything else?
I pulled up our bank account again and saw a minus sign in front of the amount we needed to pay on the house. The money was being withdrawn from our account. Hooray! It was happening.
That afternoon, finally, came an email from the notaire that he had received the money and the house was officially ours.

Luckily, we got to celebrate with some old friends who were visiting for the night.
So we're homeowners again.
Except for the past 18 months, and the first 18 months of our marriage, we have always lived in our own home. And it feels good.
But this is the first time that we have owned a home outright with no mortgage.
Now we can't wait to get back to France to get to work on it.
Just a little more than a month before we fly back.
at August 08, 2019

Wow.. You did it. Congratulations.!!!

Finally !!!!
Congratulations my friend for your new home, Valérie and I are so happy for you.
Let me know when you will be around, in France we have a Tradition (a behaviour if I remember well) "Pendre la crémaillère"
You got time to investigate on what is it lol
Cheers, we will bring Champagne !! (and not this awful blanquette)

Félicitations! Now you will be able to enjoy making this house and town completely your own. I hope more retired and semi-retired Americans will learn what wonderful bargains exist in the small towns and villages of France, with an unmatched lifestyle. A win/win for the buyers and the French economy. Granted, renovations can take awhile. We are doing ours long distance - now into a third year of projects on our village house, which I have blogged about: http://www.atinyhouseinnormandy.com/blog. You are lucky to have friends who are builders, and you will be on the spot for all decisions. Bonne continuation!

Thanks to everyone for your congratulations!
John and Lynn, I know you'll get to see the house next fall. We'll get to working on it.
Anne, You know what it is like to buy a new place and try to get settled.
Cedric, I look forward to learning about a French housewarming tradition, and the champagne!
Jacqui, Congratulations to you. 15 years is quite an achievement.
Kiwi, I can't imagine trying to renovate from across the ocean. I'm going to go through all your old posts to get some tips about renovating in France.

I love forward to your writings on this next stage of your lives! I'm sure you will have plenty of adventures to share! This is a big step accomplished!!!

Hello Congratulations. Thank you for sharing your experiences and knowledge about holidays. Theapartmentsumalas.com

If specific areas of your home feel cold or drafty, then chances are they are not properly sealed or insulated. These deficiencies can greatly increase the cost of heating or cooling your home and are often an easy fix. Seal any holes you identify and get a price estimate for adding insulation to thin walls.play bazaar
satta king
Really many thanks

Credit Play Bazaar cards are generally superior to debit cards. If you are granted a credit card, purchase everyday necessities like groceries and gas with it. By purchasing items with your card, you will usually gain rewards, such as cash or maybe even frequent Satta King flier points.