Mourning the Loss of Notre Dame

As I prepare to go to bed tonight, flames are still shooting from the top of Notre Dame. The spire has collapsed and the roof of the nave has fallen in.
On Friday, as I walked from our hotel to the train station, I crossed a bridge and saw the beautiful cathedral. I took a picture. It was the last picture I took in Paris. 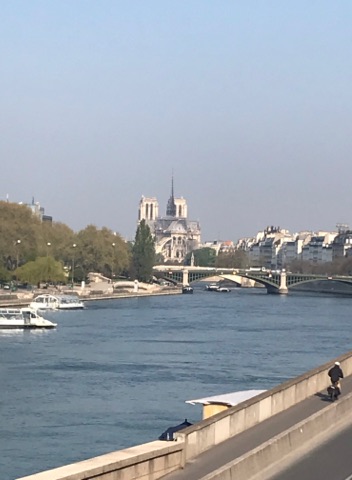 I can't believe that it will never be the same.
While Earl and I were spending a few days in Paris, we found ourselves strolling around Notre Dame several times.
I asked Earl if he had been inside and was surprised to find that he hadn't. I've even attended Mass at Notre Dame.
We stopped to look at the bells displayed in a line outside.
New ones were purchased to replace these in celebration of the 850th anniversary.
850 years! I can't even fathom something that old.
Our country won't be 800 years old until 2576.

I hope that they find the fire was caused by a mistake in the work going on rather than an act of terrorism.
At the same time, I try to imagine a worker with a power tool in hand who started a fire that destroyed an iconic building. That just seems too mundane.
Paris will never be the same.
at April 15, 2019

I have thought of the square in front of Notre Dame as Paris' living room - we always would go there and sit a while and watch people. I was heart sick when the news came on. Then I thought of all the places we have been and heard the guide say "first built in 300 A.D. and destroyed in 1000 A.D. - rebuilt in 1050 A.D. and destroyed in 1600 A.D. ..." and I know this is a world event that will mark time before and then after but it will be rebuilt with love.

I've been to Paris twice and have never been inside either. It was on my bucket list for this visit, sigh....

But did you see the video footage of the Parisians singing as they watched Notre Dame burn? It was beautiful and heartbreaking at the same time.

- I saw your blog name on Marmelade Gypsy. I like your photo in front of Notre-Dame. She seems so familiar. I have known her all my life. I was just pondering that I think the first time I saw her I was barely a toddler and my mom made me walk all over Paris on Liberation Day on August 25, 1944 and we heard de Gaulle speak in front of her; I don’t remember that much. Then of course I saw her daily while going to school. Most Parisians have not been inside to hear mass, because most of us don’t go to church. I am not a believer either, but Notre-Dame is part of us, part of our culture. It is a great catastrophe for our city and our country. I was happy to hear today that already 700 Euros have been pledged for her reparations.

Ramu Kadiyam said...
This comment has been removed by a blog administrator.
5:58 AM

On the other side of terrible is the people that are pledging large funds to rebuild - a coming together for a common cause is a wonderful thing.

Yes, you're all right to look at the hopefulness rather than the loss. The spire that fell was only a few hundred years old, and it will rise again.
Sillygirl, Thanks for sharing your memories about Notre Dame. I think it felt personal to all of us who have loved it. And, you're right, the donation of money to restore it is heartwarming.
Jackie, I guess it will go on another bucket list once it's restored. Hope you have a terrific trip.
Noreen, I didn't see the footage but it sounds lovely.
Vagabonde, Thanks for visiting. What momentous memories you have connected to Notre Dame. Thanks for sharing.

Wonderful article in the Wall Street Journal about how prepared the fire department was to save things and protect the towers.

I, too, had to write about Notre Dame, it so deeply saddened me, this cultural treasure -- home not to just one religion but the world. I love your post, Paulita. So far, I've not heard anything other than construction issues so that's a relief.