Running in the Snow

As I rolled out of bed this morning, I expected the bitter cold, but the weather app promised me snow that wouldn't begin until around 8 or 9 a.m. 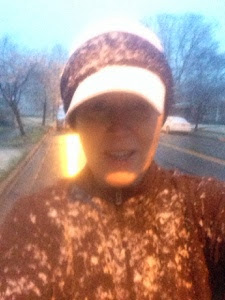 I drove my husband to work around 6:30 because I thought it was too cold for him to stand and wait for the bus. It's 19 degrees (-7 C) now and feels like 14 (-10 C). As I pulled back into the garage, dressed in my running clothes, I noticed some snowflakes drifting from the sky.
Usually, I love to run in the snow, especially snow with big fat flakes that cover my jacket, changing it from black to white.
But this morning I was dismayed.
I just had my hair cut and the stylist straightens it for me. I can keep it straight for about a week if I don't do one thing -- get it wet.
Once it's wet, it reverts to a tangle of curls. (Yes, I know everyone wishes they had curly hair but that's because they don't actually have them. Plus, I get many more compliments on my straight hair, which some say makes me look younger, than I do on my curly hair.) 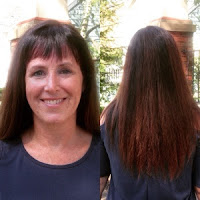 After I saw the snow, I planned to put on a hood that would cover my hair and my neck, but sometime since I last used it (winter 2016) it has gone missing, so I braved the cold without it.
This snow was not big puffy flakes, but instead prickly ice pieces that stung my cheeks and chin. I really wished I had that hood.
As I ran the first half mile, I began negotiating with myself. Maybe I didn't have to go six miles. Maybe I could run three miles. I'd get through the first mile and decide.
By the time I finished the first mile, I'd warmed up some, so continued my regular route. Into mile two, I noticed that my thighs were so cold that they burned. I suppose that might be a sign of frostbite, but I have figured out after years of running, that fat gets really cold. It's no secret that I carry most of my fat in my thighs and hips. They'll stay cold for an hour after the rest of my body has warmed up.
I haven't figured out why fat holds the cold longer, but I assume that it's protecting the rest of my body and my internal organs, like walruses with blubber.
As the burning continued, I debated who I could call to come pick me up. My friend Sheila is always available to help, but her husband just had surgery. She's already taking care of someone. My son Spencer would be asleep and not respond to the phone. My daughter might drive to pick me up, but she's preparing to drive to New Jersey after work today because her boyfriend's grandmother died.
After I had gone through the possibilities, even seeing a man walk out of his front door and contemplating whether he would let me go in to warm up, the burning feeling had faded, so I continued to run.
I did cut it short, ending at five miles and at a Starbucks before I walked home. The snow skittered along the roads and sidewalks in long lines, not yet enough to cover the pavement.
And when I returned home, that coldness in my thighs returned, as if they were big blocks of ice.
At least I've learned enough not to hop right in the shower where I'll scream from the pain of the hot water on my cold skin.
And as for my hair, I've kept it in a tight ponytail braid and won't know until I take it out if the icy snow returned my curls.
I'm hoping for a few more days of straight hair.
How's your weather? Hope you have sunshine and warmth.
at January 05, 2017

Well, it's been rainy in Southern California, if that makes you feel any better! I can certainly see why you and your husband are looking to move to the southern part of France!

You are braver than me! Though I did get that frozen thigh feeling (despite wearing ski leggings) over the holidays in Belgium when I went for a walk--it was minus 2 Celsius. In Carcassonne it's been cold, minus 1 at night and only around 6 or 7 during the day, though it was a balmy 12 on Monday when we got home from Belgium. You're unlikely to encounter snow when you move to southern France.

OMG you have my total admiration, I am what I would call a plus size lady so going for a run is out of the question for me but doing it in the snow is something else, you go girl, lovely post

Hi Paulita, You are one BRAVE lady!! I hope you thawed out ok. As for the hair. Mine is not as curly as yours but it goes wild. I straighten mine. Actually all depends on my mood but people also tell me I look younger too.

We have had no snow , just freezing and wet :-( today but we have had a few days of sunshine and cold too.

Keep warm and wrapped up xx

Thanks to everyone for the comments. It has gotten even colder here so I ran inside on the treadmill on Friday and Saturday, and then I took today off. I'll hit the roads again tomorrow.