In a matter of hours, 26 years of collecting Christmas decorations was distilled to three boxes, one for each of the kids, and a smaller one for us to take with us to France.
"That was brutal," I said as I fell onto the leather couch afterward, my insides wrung out from the unsentimental decisions I had to make about which ornaments were worth moving, which should be given to the kids, which would be given away, and which would be tipped into the trash can.
The trash can ornaments were the hardest. Paper stockings that had been streakily colored by Grace and Spencer -- their names printed in block letters at the top by a preschool teacher, a piece of red yarn looped at the corner to hang on the tree. The stocking ornaments were unwieldy and didn't even make sense to hang on a tree, but I felt a thud as we got rid of them.
We gathered a whole box of giveaway ornaments, things we couldn't remember collecting -- a wire moose ornament, a wooden rocking horse (the third one we found), an extremely heavy snow man that bent the branches down, a bunch of plastic bulbs that we hung on the low branches so the cats could bat them down and chase them across the floor.
I bought three plastic boxes with lids to organize ornaments we would give the kids. We had talked about waiting until we could gather the kids, have them each pick the ornaments they wanted to keep. But, the night before New Year's Eve, as we watched football, my husband carried boxes from the basement and we began dismantling the tree.
First, we claimed the few ornaments we would take with us, a small glass bulb with glitter stripes that came from Earl's Christmas tree as a child. A rocking horse with our names painted along the red rocker that we bought on our first road trip together when we visited Maine. A bulb with a Paris cityscape. An elongated glass snowflake sprinkled with sparkles.
I tried to picture packing this rectangular bin into my suitcase would I moved to France next year. Even more difficult to imagine is buying a tree in France, setting it up and hanging these few ornaments on the prickly branches.
The cats are always interested in any new activity, and Tupi was quick to try to decide which would be the best fit for him. 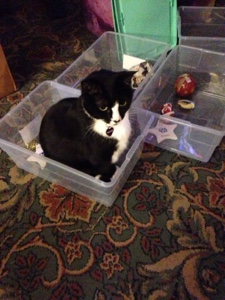 As I separated ornaments for the kids, some of them were easy. Each child has a "baby's first year" ornament, and my mother had given them ceramic stars with their names on them. Then Grace has some horse ornaments that she has collected over the years and a fairy Barbie. I don't know if she still cares about the Barbie, but she can be the one to get rid of anything she doesn't want. The letters PEACE in purple went into Spencer's bin because he hangs up the phone with his friends using the phrase, "Peace Out." A penguin dressed in Hawaiian clothes while surfing went into Tucker's box. Various other glass bulbs, some of them crackled with age, were separated between each box. 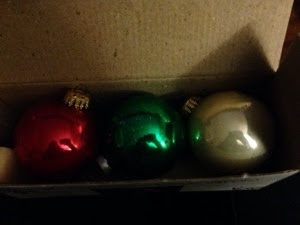 And before we knew it, the tree stood bare, only its pinprick lights shining from the still green branches. 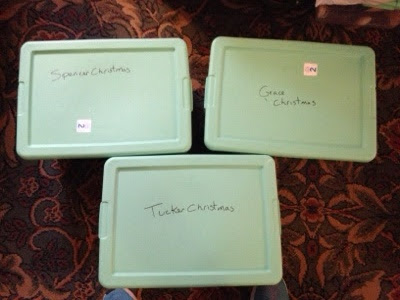 Separating the Christmas decorations felt like a real declaration, a promise, that we would be doling out our belongings and moving with nothing more than what fits in our suitcases.
It left Earl and me both feeling as prickly as the dried out Christmas tree. We snapped at each other, but rejecting the ideas of the other.
"We'll just store these lights and garland." He folded them into a big blue tub that had previously held numerous decorations.
"But why? We'll just need to get rid of it in May or July or whenever we sell the house." My voice sounded sharp, dismissive.
"Fine, we'll do it your way. What do you want me to do with this then?" The ropes of light hung from his wrist like a wreath.
"Oh, no. We'll do what you want. Just store them in the basement and we'll go through everything again in the spring." The ridicule fairly dripped from my words. And the testiness continued the next morning as we completed taking down the tree, leaving a trail of green pine needles from the living room to the front door where the tree was hoisted to the ribbon of grass along the street. The city picks up the trees, turning them into mulch.
I silently carried the boxes downstairs, stacking them up until we sell the house.
Around noon, Tucker stopped by. As he relaxed watching a soccer game on TV, Spencer got up and came into the living room with a cup of coffee.
"Hey, where's the tree?" he asked, realizing that Christmas spirit had been stricken from the room.
"Out by the curb," Earl said.
"No, we took it to a farm," I jumped in quickly. "It'll have a better life there."
Everyone smiled. That's what parents tell kids when a pet has died or needs to be put down.
Long ago, we had a beagle named Darwin who bit the girl across the street so we were forced to get rid of the dog. Luckily, Earl had a co-worker who lived on a farm and hunted, so he took the dog. Just within the past month, Spencer asked whether Darwin had actually gone to live on a farm or if that was a euphemism.
"No, really," Earl told him. He had even taken Grace to visit Darwin on the farm.
So now, we could all feel better that our Christmas tree has gone to a farm, even though the evidence otherwise is just down our front steps.
As we lay in bed this morning, I asked Earl if we could leave the outside lights up just a while longer. I don't want to be one of those people who displays Christmas lights up to Easter, but it comforts me when I lie in bed at night and see the twinkle of those lights through our Craftsman style windows. 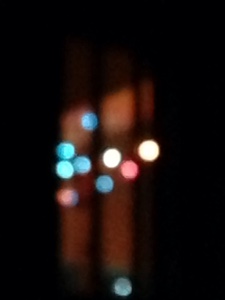 And I know that next year at this time, I'll be looking out another window in a different county.
at December 31, 2016

I don't consider myself to be a sentimental person but, your post made me feel sad for you. I can't imagine moving to another country with just suitcases. New towns, a new state, but WOW, new everything. Wishing you Peace, joy, good health and happiness in France in 2017.

This post breaks my heart, Paulita. So beautifully written, so caring, but so heartbreaking to know that treasures you have loved for so very long are being divided to good new homes but also being "let go." I have such separation anxiety, I think it may be why I rarely move. I fear I would have been an ocean of tears.

And yet, you end on this glorious note of hope -- that in a year when you set up the precious ornaments that you have saved, you will be doing it in a new place, living out your dream in the country you love. And this is the shining star, the hope, the dream coming true. This is beautiful.

I hope Tupi can come with you.

Oh dear your post has made me very melancholy as I had to do a similar thing when we made the move 8 years ago, I think it took 4 years to get over it,,,

Dianne, Jeanie and Roz, I really appreciate your emphathy and your encouragement. Thanks for reading.