Tuesday Intros -- From the Fifteenth District

Every Tuesday, Diane at Bibliophile by the Sea posts the first paragraph of her current read. Anyone can join in. Go to Diane's website for the image and share the first paragraph of the current book you are reading.
This week I'm reading a book for FranceBookTours and I'll have the full review on Sunday, Jan. 11. From the Fifteenth District by Mavis Gallant is literary fiction, short stories, set mostly along the Cote d'Azur of France, near Italy.
Here's the intro. 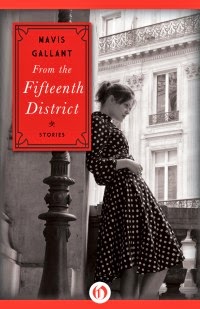 The school Carmela attended for much of six years was founded by Dr. Barnes, a foreigner who had no better use for his money. It had two classrooms, with varnished desks nailed to the floor, and steel lockers imported from England, and a playing field in which stray dogs collected. A sepia picture of the founder reading a book hung near a likeness of Mussolini. The two frames were identical, which showed the importance of Dr. Barnes -- at least in Castel Vittorio. Over their heads the King rode horseback, wearing all his medals. To one side, somewhat adrift on the same wall was the Sacred Heart. After Carmela was twelve and too old to bother with school anymore, she forgot all the history and geography she'd learned, but she remembered the men in their brown frames, and Jesus with His heart on fire. She left home that year, just after Easter, and came down to the Ligurian coast between Ventimiglia and Bordighera. She was to live with Mr. and Mrs. Unwin now, to cook and clean and take care of their twin daughters. Tessa and Clare were the children's names; Carmela pronounced them easily. The Unwins owned a small printing press, and as there was a large Anglo-American colony in that part of the world they never lacked for trade. They furnished letterhead stationery, circulars, and announcements for libraries, consulates, Anglican churches, and the British Legion -- some printed, some run off the mimeograph machine. Mr. Unwin was also a part-time real-estate agent. They lived in a villa on top of a bald hill. Because of a chronic water shortage, nothing would grow except cactus. An electric pump would have helped the matter, but the Unwins were too poor to have one put in. Mrs. Unwin worked with her husband in the printing office when she felt well enough. She was the victim of fierce headaches caused by pollen, sunshine and strong perfumes.. The Unwins had had a cook, a char, and a nanny for the children, but when Carmela joined the household they dismissed the last of the three; the first two had been gone for over a year now. From the kitchen one could look down a slope into a garden where flowering trees and shrubs sent gusts of scent across to torment Mrs. Unwin, and leaves and petals to litter her cactus bed. An American woman called "the Marchessa" lived there. Mrs. Unwin thought of her as an enemy -- someone who deliberately grew flowers for the discomfort they created.

I look forward to seeing what you are reading.

I'd have to read a bit more, because the beginning doesn't really hook me.

Kelly, It is really long, isn't it?

Love the cover. The opening is good, too!
Today I'm spotlighting The Girl Who Came Home

I do love the cover, and the setting sounds great. The prose didn't really grab me, but I hope you are enjoying it.

Here's mine: “CALL ME ZELDA”

I don't think this would be for me. The first paragraph seems too long. Have a great week.

Even though the beginning is slow (lots of "telling"), I'd keep reading. I like the Cote d'Azur setting, and I'm curious about the family that seems to be in decline. Imagine a 12-year-old leaving school and being sent away from home to be a servant!
My Tuesday post features LEARNIN’ THE ROPES.

I'm not sure about this one, but I'm curious enough that I would likely continue.

The first paragraph seems a little too long, but I love the cover!

Too wordy IMO, but I am still curious and would try a few more pages.

Hope you enjoy it.