Today, we begin week 2 of living out of a suitcase since we sold our home and moved out last week.
My neighbor tells me that once we vacated at 9:51 a.m., a moving van trundled down the alley at 10:10 a.m. Good thing Earl found the keys he had lost so we could move the pickup truck we were driving. See last week's dreaming of France post for the details.
Our friends have made it an easy transition, offering us a comfy bed in a "French provincial" bedroom. We've gone to a couple of hockey games with them and went to see the new Star Wars movie last night, but in between, we're saying more goodbyes.
I'm awful at goodbyes, so I understand this tendency, but what I've noticed is that people are very reluctant to say that last goodbye. Instead, we make a plan to see each other one last time before our departure.
My running friends and I met on Saturday and ran at Antrim Lake. We can go for another run one morning before work, we decided. 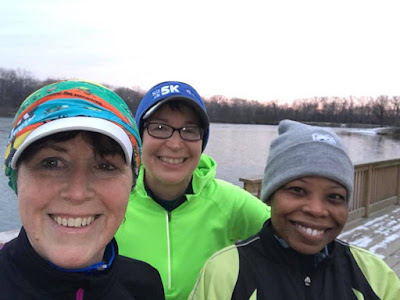 "Monday?" Najah suggested.
"Let's make it Thursday, the day before I leave," I replied. I knew that if we met for a run on Monday, we'd be scheduling another run on Thursday, or even Friday, the day we leave.
I met with Angie and Emily, two of my long-time writing friends on Saturday. I was grading papers, but they were writing. Before we left, we agreed to meet again on Wednesday with the larger writing group. I'll have to leave early to see my sister-in-law and her grandchildren one more time on Wednesday evening.
Saturday evening, we had dinner with Earl's brother and his wife, but we planned one more get together if they come to Earl's retirement party and take our car for their son in college to use.
And this morning we went to mass at the Newman Center on the campus of Ohio State. We hugged many friends and retrieved promises that people would visit, including a goddaughter who has grown up before I realized it. I promised I would make up for my negligence if she wanted to come hang out in France. She's in 8th grade, so it might be awhile.
Tonight, our family is gathering with my friend Najah and her son for a family game night. Just some time all together so the kids can be reminded they can turn to Najah when I'm not around.
Eventually, the days are going to run out. There will be no more scheduling for future days.
Today, my brother and sister-in-law drove to Columbus to see us. And when we walked out of Hofbrauhaus to the parking lot, we said goodbye. A final goodbye. With hugs and cheek kisses, and one more hug just because we aren't sure when we'll see them again. Maybe we'll come home next year around this time, but they probably aren't coming to France in the coming year. So it was goodbye.
And that's going to happen more and more often.
But if we didn't say goodbye, then we couldn't fly off on our adventure, so we will say au revoir, until we see you again, and maybe they can say adieu, go with God, as Father Vinnie did this morning.
For you blog readers though, I'll say à bientôt, which means see you soon. Two more Dreaming of France blogposts before we jet off to our new lives in France.

I have a hard time with goodbyes too. There should be a class we could take in how to do that gracefully! Usually now I just say "see you later in life!" because it is an open hope and the connection isn't broken - it is just being stretched around the world.

My husband has been checking airfares and today saw a great deal on WOW. If we booked right now for May/June we could get two return tix to Paris for $800. Such a deal! But we're not quite ready to commit yet. Still, Paulita, it looks like we will be meeting in the future, so I will be saying not goodbye, but hello. Ciao!

I have been living out of my suit cases or boxes for 7 months now , :-( hopefully the New Year will bring me more luck. I know that I will be meeting you ..Yay Yay.

Thinking of you. I haven't had to say Goodbye to anyone really . I went to live in Germany in the 80's but that was only for 3 years. I think I would go with Au revoir and what the Priest said. Take care ♥