Owl-nalysis of My French Language Skills

If you follow me on Facebook, you've already seen part of this story but I thought I'd dive a bit deeper on the blog.
On Saturday morning, Earl told me he heard a horrible screech during the night and when he went out on the balcony, he saw a bird dangling in a tree. Our neighbor Jack had seen the same thing and they determined it was an owl.
The bird was upside down on a tree branch and just looked like a mess of feathers. We all agreed that it was sad and wondered how it had managed to hang on. Theresa, who has worked with raptors at the zoo, wondered if it might have fallen prey to people who put tar on branches to catch birds, but the branch was over the river and not reachable by people except from our terraces.
Theresa came back to look at the bird and none of us saw any movement, so we agreed the owl was probably dead. We felt sad about it and wondered if the blustery night had doomed the bird.
Later that evening, Jack messaged that we should look at the bird. It was upright on the branch, one wing weirdly stuck out.

It must have broken a wing, I suggested.
I decided to call the "pompiers" which is French for firefighters. They have been known to rescue wil animals and get them where they need to go.
I didn't know the number to call for the pompiers' non emergency and I still hate speaking French on the phone, so I drove out to their station.
Several firefighters stood around a truck and they looked at me curiously as I pulled up and walked toward them. I had a picture of the owl and some basic phrases I planned to use.
A young woman firefighter came toward me and I told her about the owl with the broken wing. I didn't look up the word for wing, but I could hold my arm up awkwardly so she knew what I meant.
She informed me that I needed to call 18 so they could be dispatched. I hemmed and hawed, trying to get out of making the phone call, sure that I wouldn't be able to explain it adequately.
But I drove back home and used Earl's French phone to call.
I told the man on the line that there was an injured owl in a tree over the river. He asked me some questions like what city I am in and how high is the branch. I could answer those. Then he asked me, how do you know it is injured (blessé)? I didn't expect him to challenge my assessment of the bird.
I explained that this morning we thought it was dead. I couldn't think of the word for upside down so I quickly looked it up and said, "ce matin nous avons pensé qu'il était mort; c'était à l'envers." And then I explained that it was no longer "à l'envers."
The man told me, Don't worry -- "Ne t'inquiète pas. C'est normal." It's normal for an owl to be in a tree.
Did he think because I don't speak fluent French that I was stupid, that because I couldn't explain in French how the bird was injured that it couldn't be injured? Possible. Unfortunately, I speak better French than many English speakers here, so it frustrated me terribly that they didn't take me seriously.
I posted on Facebook, hoping someone from the town would see it and come to our rescue, and someone did, but not the pompiers. Instead, some British friends who are animal lovers kept asking if the bird had been saved yet. I figured I hadn't been clear enough in my writing that the firefighters were not coming to save the bird.
As darkness began to descend about 8 p.m., Steve and Lou pulled up in their van.
We debated the pros and cons of trying to save the owl. After all, it had come back from the near dead, and it looked better, being upright instead of upside down. Maybe if we left it alone it would heal.
It might try to attack us if we got close to it.
What if we tried to save it and knocked it into the river. Lou was ready to jump in after the owl, she decided as she stacked her phone on a stone and Steve added his to the pile.
Steve had been a firefighter in England, and he's in great shape, running and biking constantly.
Two tree trunks run parallel, so Steve shimmied up the one opposite the owl's perch.

Oh no. I felt so guilty then for not trying to go up and check on it earlier. The poor bird had been tied to a tree branch all day.
As Steve assessed the situation, he decided the best way was to cut through the two branches, the one where the bird sat and the other where its wing was attached by fishing line.
We found a saw and Earl climbed a bit up the trunk to hand it to Steve. Then he began to cut through the wood. As the branch cracked, we feared that the bird and the branches would plunge into the river. But Steve stopped and reached over to break off the two branches together.
He handed them to Earl, who somehow handed them to me.

He had lost his grip on the branch and dangled by his injured wing, so I quickly tried to get his feet to the ground so I wouldn't put more stress on his injured wing.
Earl squatted down with a pair of scissors and began to snip away at the fishing line. Lou put a towel over the owl's head, but he had remained calm throughout, not squawking or snapping.
Earl removed the fishing lure attached to the line.

And slowly, unwound all the fishing line as Steve and I held our phone lights over the whole procedure. Finally, the owl was free, but he made no move to flea.
Lou suspected he would be weak and dehydrated after a day wrapped in fishing line. She decided to take him home and to try to find someone to look after him on Sunday.
So with him wrapped in a towel, we came into the light and I finally got a shot of him, his eyes closed, swaddled in Lou's arms. 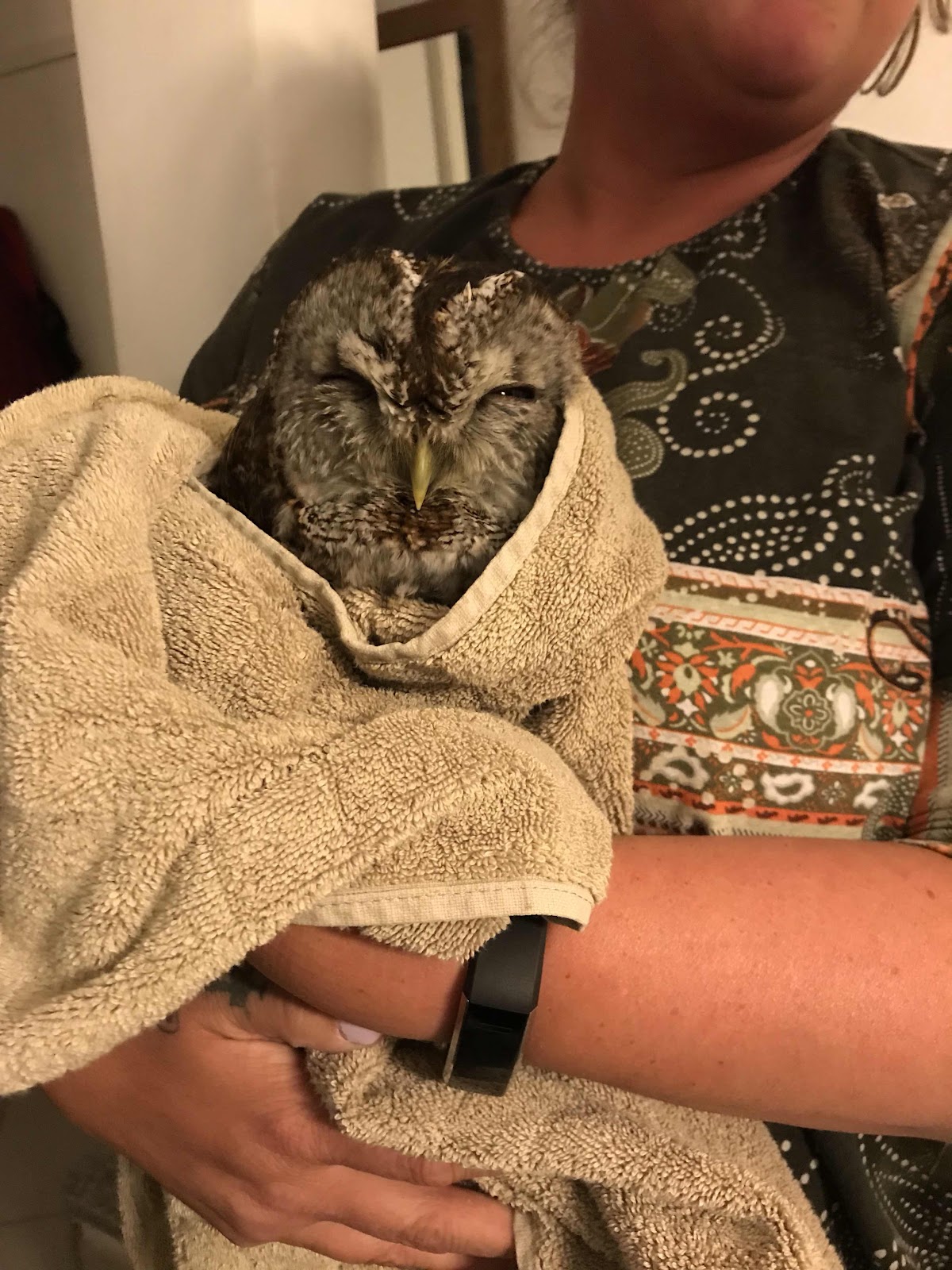 The latest report is that he's taking some water through a dropper, but not eating the proffered dog food. Theresa suggested the dog food should be soaked in water so the owl could get hydrated. She told me they used to soak dead mice in water before they fed the owls, but none of us had dead mice.
They tired reaching out to people today, and our French friend Cedric even made some phone calls to try to reach the wild bird people, but we've had no luck.
Hopefully, he'll continue to heal and a vet will take him on Monday.
But the language thing still bothers me. I wasn't able to convey the seriousness of the matter to the pompiers, and I wonder how many times things are shrugged off because the person who is calling doesn't speak the language.
I know it doesn't only happen in France. I'm sure the same thing is true in the States for people who don't speak English.
I wanted to return to the fire station today with pictures and explain how we saved the owl and how the dispatcher told me not to worry that owls are supposed to be in trees, but I restrained myself.
Hopefully, if I ever have a people emergency, I'll be able to make myself understood.
Meanwhile, I better keep working on my French. Now what was the word for wing again?
at April 07, 2019

Email ThisBlogThis!Share to TwitterShare to FacebookShare to Pinterest
Labels: Americans living in France, an owl in distress, expatlife, France, life in the Aude, Quillan, saving an owl

Did you mention "April Adventures" Geemaneee. And as usual you leave us with a chuckle.