Even when we think we're starting to put down roots, we end up moving -- again.
Our beautiful apartment two miles from Quillan just didn't have the internet strength for my teaching job. 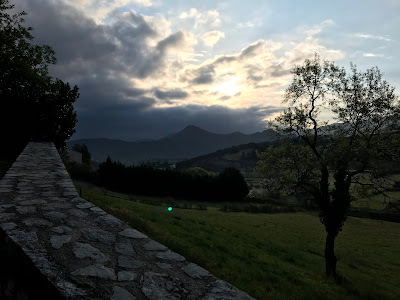 Someone explained to me that rural areas don't have the internet strengths of towns, even small towns like Quillan. And we found that out.
The owners were lovely, having an expert come in. Putting in a DSL cord that I could plug directly into my computer. But no matter what we tried, my classes kept dropping. Then we would do a mad dash into town to mouch off of other people's wifi.
After losing six classes, I just planned on never teaching at our apartment. It was stressful. I would move all of my teaching tools, along with my computer to friends' homes. I would worry about the lighting and then my computer began to be picky about the outlets where it was plugged in. I got a 5-star review from one parent who said that her child enjoyed my class but my entire focus wasn't on teaching. And this was true. I was too busy worrying about internet and battery life and things that shouldn't come into my one-on-one teaching time.
So Earl and I looked for another place to move. An apartment in town that we had considered earlier still was not completed. The British man renovating it swore that it could be ready in two weeks, but Earl would be gone then and we weren't sure if it would actually be ready.

We rented a place along the river for a month. We have a strict deadline to be out though because it is rented to someone else on May 5th.
So once again, we found ourselves gathering all of our belongings we had spread throughout the apartment -- emptying drawers, pulling olive oil and spices from cabinet shelves, washing sheets and towels we had acquired, folding the quilt I'd brought from home, .

We piled our suitcases and bags near the door, ready to hand out to the street when Earl pulled up the car. 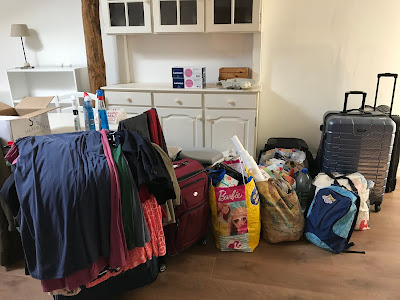 We had quite a bit more than we did January 2018 when we left the States with two suitcases and a carry-on bag each.
A lot of what is in the bags is cooking supplies and toiletries that we know we'll use, but it is a surprise that we have begun to accumulate goods again, after having purged ourselves of nearly everything a year ago.
Still, I have to think that Marie Kondo would be quite satisfied with the scarcity of our belongings.
Earl made two trips while I settled down to teach in our new apartment.
And this time, in the lovely apartment along the river, we haven't bothered to unpack, Earl shifted things around to the bag he is taking home to the States. I put some of my most commonly worn clothes in a drawer, but the other bags will remain packed in anticipation of another move in less than a month.
Why aren't you looking to buy, an Australian acquaintance asked us recently, and I didn't have a good answer. Was I still on the fence about France, about Quillan?
Being a nomad is not easy, so some tough decisions must be faced in the coming days, and we'll make them while Earl is in the States and I am in France.
Will the apartment be ready and will we want to move there?
Will we opt for something totally different in a new part of France?
Will we chuck it all in and return to the States during the high tourist season, coming back to France in the fall? But then we would miss all of the musics and the festivals.
Stay tuned to see where we land.
Wherever it is, we know it will be an adventure.
at April 10, 2019

You are getting good - maybe unwillingly - at expanding your comfort zone!

With you two, it's always an adventure 😉