French Menus Can Be Tricky

Just when I think I'm beginning to get a grasp on French, a menu comes along and lulls me into complacency.
I always grasp onto the words that I know, and sometimes assume the surrounding words aren't that important, which is how I ended up eating lung for lunch one day.
Lung.
Ack. It still makes me gag a little, just thinking about it.
When Earl and I were in Mirepoix, it was a beautiful sunny day, but still chilly, so we stopped briefly in front of restaurants looking at their menus.
This restaurant had three lunch specials, two which looked familiar, veal and linguine.
"Let's eat here," Earl said shivering in the shade, so we went inside.
Ironically, we spent quite a bit of tie debating what one of the words describing the linguine. We knew it was some sort of ham, jambon, but didn't understood the descriptor that meant pieces of ham. We asked the waitress and she described it as ham bits, basically. We didn't think to ask the waitress about the descriptors surrounding the veal.
My first clue should have been when she didn't ask how I wanted it cooked. Usually with red meat, I order it à point, or medium. The other option is usually bloody or saignant.
When the meal arrived, I thought it looked strange, but I cut off a bite and chewed.
"It has a texture like ham," I told Earl. The potatoes were good. 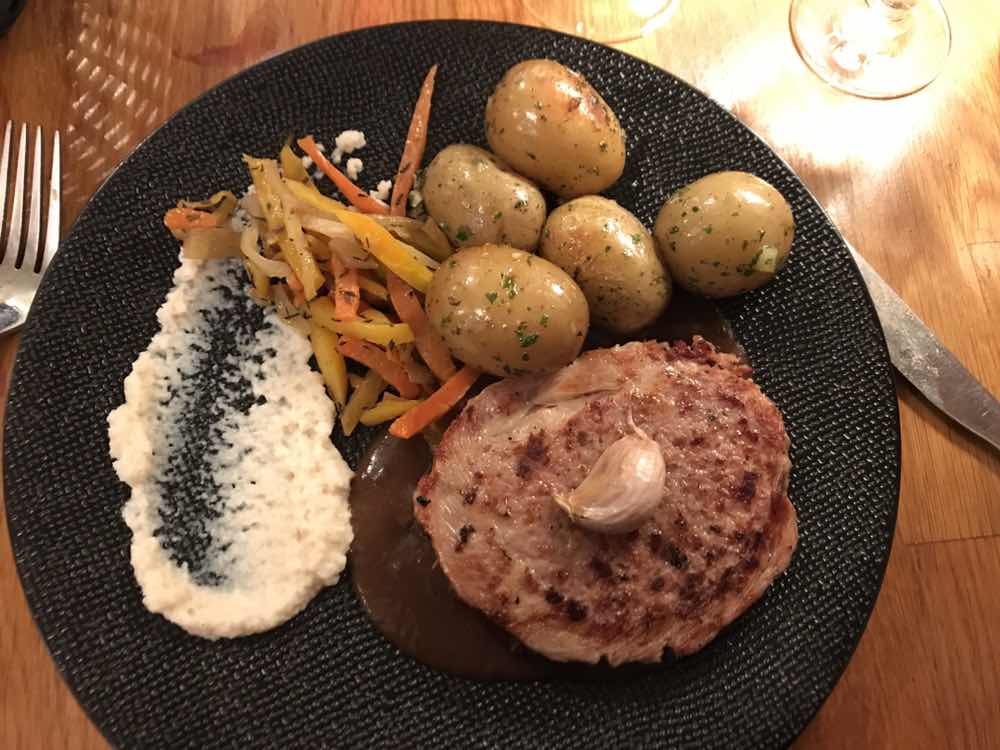 I ate about a third of it before Earl switched plates with me and I ate the rest of his linguine. We often order something we both like and then switch halfway through. This was ordering something we didn't like and switching halfway through.
Later, when our phone data was working, we looked it up and realized that the strange meat was lung. It made me gag a bit and the rest of the day, my stomach churned a bit whenever I thought about eating lung.


We've run into organ meats by accident before though. When we were traveling in 2017, searching for the perfect place to live, we stopped in a beautiful little village and Earl had veal. The waitress explained that it was "rognons" and she pointed to her lower back/butt. I thought maybe it was veal rump. Earl bravely ate many of the little kidney bites which was mixed with mushrooms in a gravy.

Okay, from now on, we're going to ask more questions about the menus rather than making assumptions. But we've eaten some adventurous food in France.
at February 21, 2019

The French don't let anything go to waste, do they. They do find the tastiest way to prepare things though. Reminds me of the woman at the butcher's that turned down his suggestion of the wonderfully fresh tongue he had - she didn't want something from an animal's mouth! So she bought some eggs instead.

Lol. Yes better from the egghole!

There are some organ meats I actually think are delicious - rognons de veau, for example, or sweetbreads (thyroid), when they are properly prepared and served in a great sauce. But I was defeated by the Norman specialty of "tripes de Caen," and I will never want to even try "andouillettes." If you look them up now, you'll know to watch out for those on your menus!
Wonderul that you are exploring so many of these special towns. Will look forward to more!

Kiwi, You have more refined tastes than we do with your enjoyment of rognons de veau. I'm aware of andouillettes, but didn't know about the thyroid. Yikes. More to watch out for.