Looking back, I'm amazed that we moved to France with so little planned ahead. We had three housesits and knew which area we wanted to live in, but that was it.
In February, while we were in Quillan, we found a place to stay from May through December. So we had semi-permanent roots to put down, but those roots didn't begin in March.
March was still a traveling month. 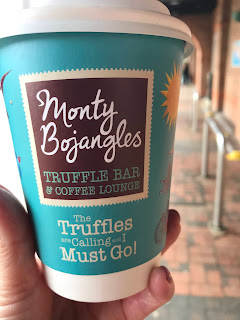 We stayed in Reigate, outside London. Reigate would probably have been called a yuppie town back in the 80s, but now I believe the Brit Lit would call it a yummy mummy town, and it is filled with mummies with strollers and yoga mats, inevitably carrying a cup of "take away" coffee. There are oodles of good coffee shops, upscale groceries, jewelry stores. It's a delightful place to wander and window shop.
Monty Bojangles was a great place for coffee. They made a mocha by putting actual chocolate truffles in the coffee.
We reveled in speaking English again, but we began to feel that familiar materialism creeping in -- so many things to buy. It felt a lot like living in the U.S.
We also lost one of the dogs on a walk when she ran into a badger hole. After we panicked for several minutes, (us, not the dog), the dachshund re-emerged with her nose smudged by badger dirt. That changed our practices and from then on, we've kept our charge on the leash. We couldn't risk losing a dog down a badger hole. 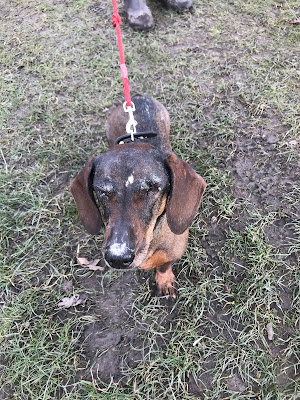 We traveled to London twice during our stay, once to see shows, Hamilton and Wicked, and once to meet a blogger friend who gave us a whirlwind walking tour. 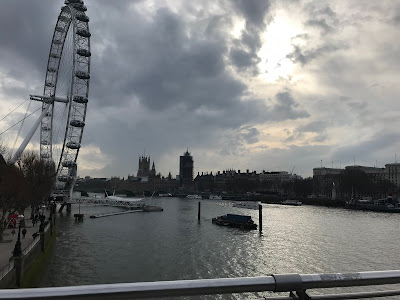 It was so nice to finally meet Anne who blogs at Anne in Oxfordshire, and we had our first Sunday roast. Apparently, that's a tradition in England. The roast does not have to be beef, like it sounds, but any roasted meat. And it needed to include Yorkshire pudding, which is not pudding at all, but a kind of bread. Who knew?
On another day, we took the train down to Brighton. It's one of those seaside towns I've always heard about, think Ocean City.

We flew from London's Gatwick airport to Nantes, France. After a delicious lunch with our friends Michel and Danuta, we drove to another friend's apartment in Chatelaillon-Plage, south of La Rochelle. It was a gorgeous apartment right on the Atlantic and we got to stay there for the weekend. 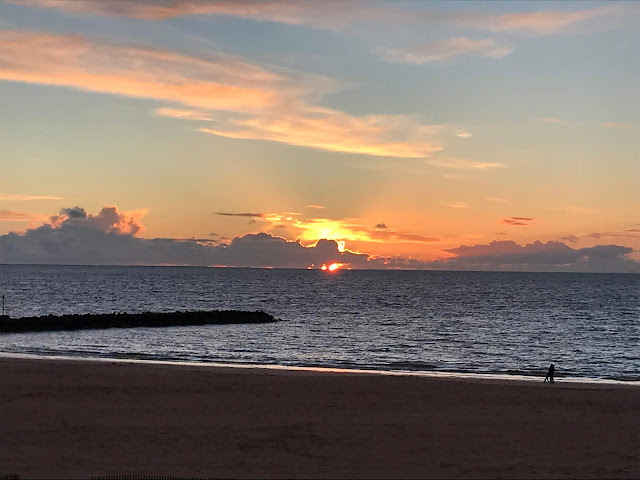 After all the dogsitting, it felt so decadent to wander the beaches and the markets on our own schedule.  And this opportunity was thanks to a blogging friend too. Maurice and Linda, who blogs at Frenchless in France, became great friends throughout the year, hosting us at their apartment in Paris and at Chatelaillon-Plage.

After our weekend at the beach, we took the train to Paris to meet my friend Najah who came to stay with us for 10 days. It was her first time in France, so we did a whirlwind tour of Paris before taking the train to Aix en Provence.
What fun trying to get Najah to fall in love with France. I think it worked. 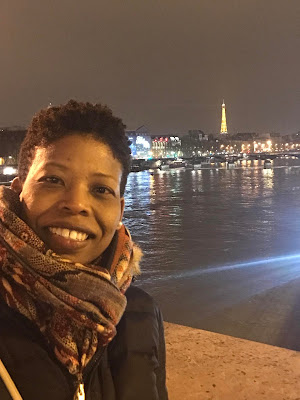 During the rest of the month, we enjoyed Aix en Provence, explored Marseille and Cassis, barely avoided an international incident in Marseille when I accused a waiter of being racist, and got stuck on a train when we took Najah to depart for Paris. I added the links for those blogposts in case you need more details. France was even more fun when sharing it with someone else we love.
At the end of March, we were well into enjoying our five-week housesit for Delana and her adorable cat Arthur. Finally, we could fall into a rhythm and figure out our French life.
at January 10, 2019

I love your recapping of last year - and I hadn't read Anne's blog before - thanks for that link! You brighten my life with every post - even the ones where you report your trials and tribulations.

Sillygirl, Thanks for sticking with me even though I went MIA. I'm looking forward to having more European adventures soon.

Always love your posts but BREAD! Yorkshire Pudding is NOT bread (both my British parents are rolling over in their graves right now). I think it’s more like a soufflé as they’re both made with flour, eggs and milk. I’ll leave it to a savvier British foods expert but I’d be surprised to hear a True Brit call it bread.

Grumble grumble. ANYWAY ... what a year you’ve had! Thanks for sharing the journey. I still think your story would make a great book ala A Year in Provence.

Sim, I’m still laughing over the umbrage you’ve taken at my description of Yorkshire pudding as bread. Ok, a soufflé. (Seemed like a dinner roll to me)

It is a very informative and useful post thanks it is good material to read this post increases my knowledge. https://hypebabe.com/

Crikey! Yorkshire Pudding is definitely not a bread - if you thought it was a bread it must have been very heavy. tt's a batter pudding probably nearer to a slightly heavier pancake mixture and closer to an American popover when made individually or even a Dutch Baby Pancake. Technically it should really be served only with beef.