June was the first month we had a home, and we began to make connections with the fabulous people who live in our village.
We met some Americans at the local quiz night. Lucky for us we sat down with Jules and Lou. Jules is American, Lou is British and they were two of the liveliest people in the bar. We didn't win, but when we ran into Jules and her husband Jack at the market that weekend, they invited us to join them and others at The Palace, which is a cafe along the river, for coffee. And so began our friendships with the Brits and Americans in the village.

We were invited to a British couple's home for drinks in the middle of a Sunday afternoon and I learned a valuable lesson about not drinking too much. I was drinking red wine. When I put my glass down, I indicated to Steve, the host and bartender, that I was finished drinking, but he would refill it and I felt guilty not to pick it up again. When we wandered home a few hours later, I was not tipsy; I was drunk. I fell into bed and woke up sometime in the night to throw up. I had learned that I needed to be responsible for what I drank and how much. And I also figured out why my new friend Jules took snacks with her wherever she went -- to soak up the alcohol.
We shared dinners with our new friends and our Australian friends who had hosted us at their B&B.
In June, for the first time, we tried blanquette, a local sparkling wine and a mainstay during so many aperitifs for lunch and dinner. 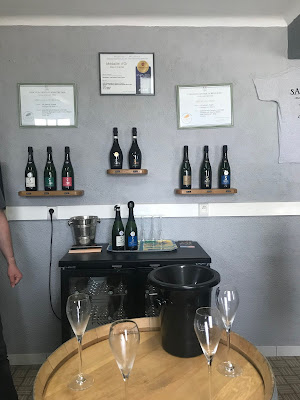 Linda (my blogging friend at Frenchless in France) and her husband Maurice arrived to stay for a few nights before we set off for a week-long hike along a section of the Camino de Santiago in France, part of the better known hike that ends in Santiago, Spain and is known as The Way. This section was called Chemin de Saint Jacques de Compostelle, and we began it in Aubrac-Aumont, France. 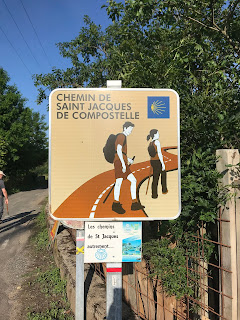 This was quite different from a hike along the Appalachian Trail (which you can read about in my novel Trail Mix)
We hiked during the day and stayed in quaint inns each night with meals that were traditionally French and so delicious. The first night set the bar with "aligot" which is mashed potatoes mixed with so much cheese, garlic and creme fraiche. A lot of the inns served beef as well because it was cow country. I only walked the trail a couple of days, 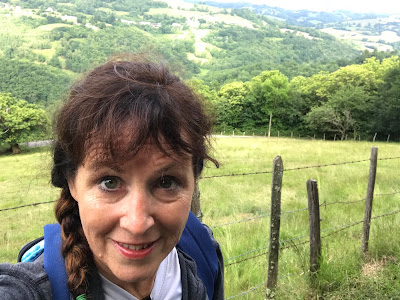 mostly riding along with Linda to explore churches and historical sites in the area. 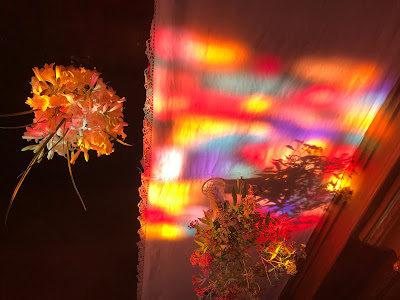 This was a week of living in France profonde, and we met amazing people throughout. We were so fortunate that Maurice and Linda included us on the hike, so a big "Merci!" to them.
When we returned to Quillan, we started going to a local bar to watch soccer games as the World Cup began and we ended up making friends with the bartender who speaks excellent English. He and his wife are now (in 2019) our first new French friends, so going to a bar to watch soccer was time well spent. 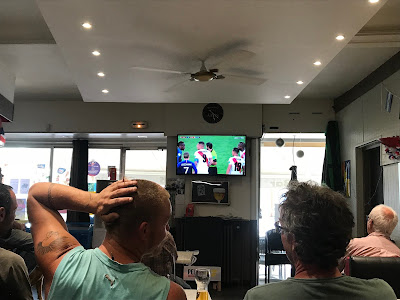 On the Summer Solstice, the village filled with music. We snagged a table and joined together with friends to drink and listen and even dance a bit. We laughed about the English language songs, but mostly we just enjoyed the camaraderie of the village.

We started trying to make inroads into the French community by joining an evening hike. The hike lasted a few hours then ended with a communal dinner. The hike and the meal were so great, that I didn't anticipate how much fun the dancing afterward would be. Oh, how I had missed dancing. We drank a lot and danced even more, stumbling out well after midnight to argue about which way was the walk home.

We explored the area around us, visiting Perpignan. We took the dollar bus as it cut through the mountains, narrowly missing sidewipes of rocky cliffs and cars going the other way. Then we relaxed in Perpignan, doing a bit of shopping and sightseeing while the men moved from bar to restaurant to bar before we caught the bus back.
Perpignan is definitely a place I would love to explore more.
I could say that we didn't leave France during June, but I ventured into Spain with a few friends who like to go shopping across the border. It's a couple of hours to the shopping center in Spain, and we had a delicious lunch. 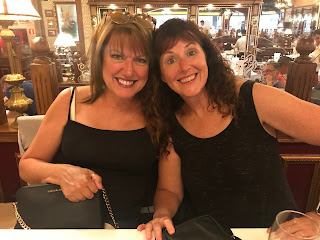 At the end of the month, we rented a car and drove to Aix en Provence to celebrate with our friend Delana the new life she was going to. What a bittersweet moment as Delana, a friend who had inspired me and enabled me by allowing us to use her address, would no longer be in France. 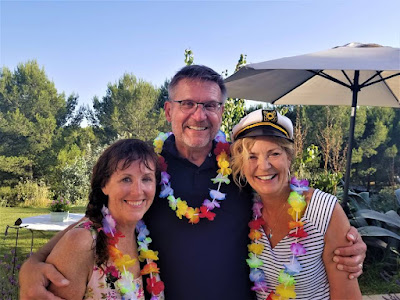 But you can't begrudge a friend the happiness that she is rushing toward.
Bon voyage, Delana. Thanks for helping me get the nerve to come to France.
June was filled with friends and travel. I pinched myself. Could this be real?
at January 14, 2019