Our January as Ex-Pats

A year ago today we flew to Paris. As always, I felt jumpy with excitement as we crossed the ocean, and my heart soared at the thrill of landing in Paris. A driver waited for us, since we had giant suitcases, and drove us to our hotel, just around the corner from Notre Dame. Helpful tip: In Paris, the taxis are regulated and the cost from the airport to the right bank is 50 Euros ($57) and to the left bank is 55 Euros ($62.70). For our trip this year, we are sharing a shuttle with other travelers for 41 Euros ($47) at the current exchange rate.
We spent those first few days in Paris, giddy with our audacity. We had sold our home and ditched most of our belongings to run away to France. I went for a nine-mile run along the Seine and past the Arc de Triomphe, too early for most people to be out so they couldn't sneer at my running clothes rather than fancy high heels and designer jeans. 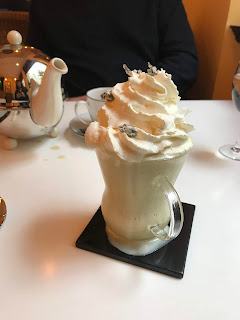 Earl and I explored places we hadn't seen in Paris. We visited Mariage Frères, the famous tea room, where I was served a 9 Euro tea milkshake. I can't get that tea milkshake out of my head, and it's not a tasty memory.

Earl went with the more traditional pot of tea. Had we thought about a pot of tea rather than a cup of tea, we could have simply shared a pot.
For me, the famous shop was a bit underwhelming, but I'm a coffee person.

We also took a ride on the giant ferris wheel, la Grande Roue de Paris, at night, breathing in the beauty of the city. We were told it was the last year for the ferris wheel, but I think it's there again this year, so that must have been false information.


Another Paris highlight for us was the wine and cheese tasting that Grace gave us as a gift. We met a wine connoisseur in the Latin quarter,and he led us to a wine shop and talked to us about which wines to choose.
Then he took us to a restaurant that was closed so we could taste the cheese and wines he had chosen. We felt like true insiders, so I recommend trying these experiences which you can find on Travelocity or Airbnb or other tourism sites.


On the way home from the wine and cheese tasting at the restaurant Bistrot l'Estrapade in the 5th arrondisement, we passed this town hall still lit for Christmas. Remember that the Christmas season lasts until Epiphany in this very Catholic country.  And then we took the train to Poitiers for our first house sit. Stop me if you've heard this before, but our initial experience with housesitting was a calamity. Five cats, three dogs, two donkeys and chickens. 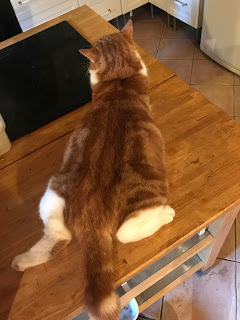 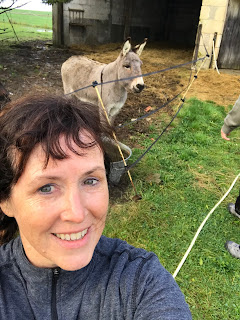 I didn't mind the mud from the yard that the dogs tracked in. It was the layer of filth throughout every surface, the tins of cat food set on shelves and counters, the litter boxes in every room. If I set my phone down, when I picked it up, a layer of grime covered it. We did try to clean, but the sheer number of animals meant there was no staying ahead of the crud.
I couldn't eat in the house because I was so repulsed by the smell and the filth.
We instead chose to go out for one meal every day and avoided eating in the house. But, we had long walks in sweeping landscapes, and we explored some beautiful nearby cities as we sought to escape the dirty house. 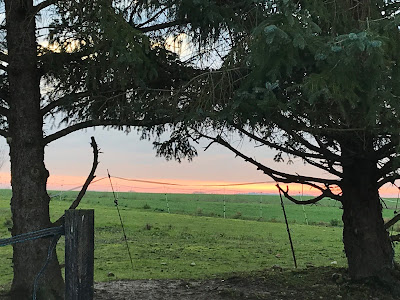 We also met our first new friends, a British couple, Kate and John, who invited us to their clean home for a meal.
Before the end of that week, I got sick with a cold that turned into bronchitis and lasted a good three weeks, so that tainted my view of our travels.
We traversed the country in a rental car to land at our friend Delana's apartment in Aix en Provence (who knew how her life would change in a year! After 10 years in France, she fell in love and is sailing on a catamaran in the Caribbean with Mitch).
The day after we arrived in Aix, me coughing and claiming that I was getting better, Delana started to get sick too. We spent a delightful evening drinking pastis (a licorice flavored alcohol) for dinner to clear our sinuses. Luckily, Delana had several brands to choose from.
After a week of recovering, we drove across the country again from Aix en Provence to the Charente somewhere in the countryside between Angouleme and Cognac.
This house was charming, a lock keepers cottage with two dogs and two cats, and the British couple who owned it was also great. The fed us and made sure we knew the routine before they left the next day. We've stayed friends with Caroline and Norman and made a return visit to their home in May.
But our troubles weren't over for January, as the waters of the nearby Charente river continued to rise, surrounding our little island on the lock and preventing us from driving out. It was only a few days that we were stranded, and the water never actually got near the house where we stayed, but I did break into a package of cookies that the owners had when I got desperate for sweets and couldn't reach the grocery store.
The dogs, Jeff and Toby, were admirable companions. Jeff, the dachshund, convinced Earl to carry him whenever the water got deep on our twice daily walks. 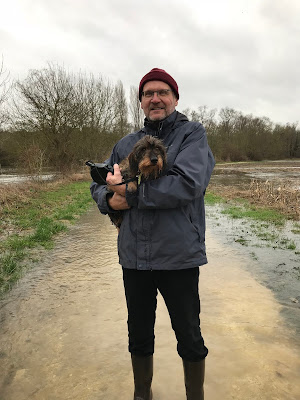 To me, the best part about the floods, as the water filled the nearby farm fields, was the arrival of the swans. The swans took to the fields as if they were ponds in waiting. I loved walking down the road and finding the swans placidly floating, or flapping their giant wings as they took off and landed. 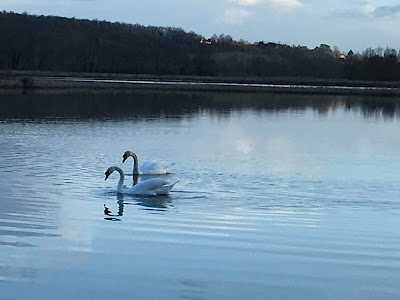 In spite of my illness, in spite of our first housesit, our first month in France was filled with beauty and exploration.

I do remember that first house sit. In fact, that stuck with me hard as a friend was considering doing something similar! She ended up not (well, not internationally) but I recall that time!

What a year you had, Paulita. I love the photos -- the Paris pix especially. And soon, you'll return!

Loved these two posts and reliving some of your fondest memories and recalling how we were on the edge of pour seats awaiting your next episode. Thank you for letting us go a along for the ride.

I am green with envy - crud, floods and all.
Belated new year greetings.

Jeanie, Thanks for going on the journey with me.
Just Me, Thanks for your support. Hope to have more adventures soon, with lights on my shoes.
Mystica, Yes, the small discomforts are nothing compared to the extraordinary experiences we've had.