One Year in the Life of an Ex-Pat

Sometimes I forget that I'm an ex-pat since I've been back in the States for two months, but things are getting real, and our time in Ohio ends in a few days. Then we'll be in Florida for nearly two weeks before flying to Paris.
Paris - again!
I try to remember the feeling of anticipation and sorrow I felt last year as I said goodbye to each of my children and my parents and boarded a plane on January 4.
I had no idea what my new life would be like, but I anticipated challenges and adventures, and we found both.
In the past year, I have seen some gorgeous scenery, eaten some amazing food, and met some incredible people.

One of the best things from last year, the thing that I still rave about, is seeing the musical Hamilton in London. We had a housesit in Reigate, outside of London, and took a train into the city on a snowy day. Apparently, snow means everything shuts down in England, so we got in line for returned tickets to Hamilton and got lucky. The musical stuck with me throughout the year and the meaning has changed. "How lucky we are to be alive right now..."  Of course, you don't have to go to London to experience it. I wrote a blog post about my experience at Hamilton if you want more details.
Another amazing experience was the Carrières de Lumières in Provence where artwork is projected on the cavernous walls of a quarry and accompanied by music. 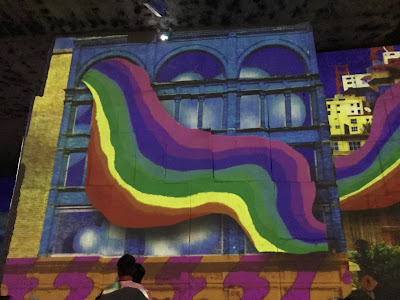 It was amazing to see the art evolve as the picture changed, to feel myself bathed in the colors and surrounded by the music. And I got to experience it again at Les Ateliers des Lumieres in Paris in September where a sister exhibit offers the same opportunity with different artists. 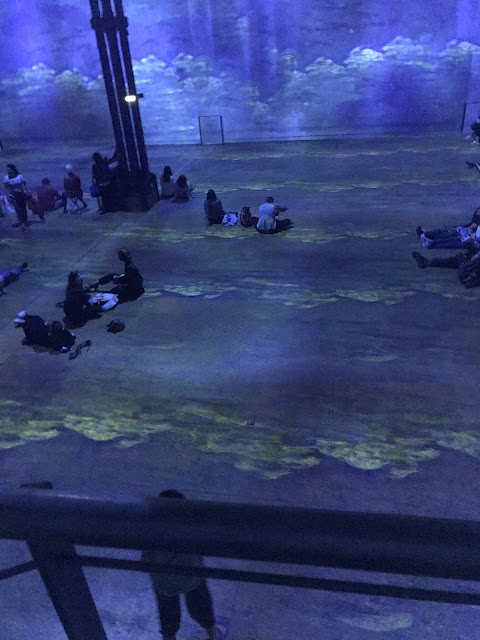 The history and the architecture had an impact too. Everywhere we went there were ancient building built by the Romans or the Cathars or the Medieval French.
A half-timbered building in Cognac built in the 15th century where the carvings on the wood were still visible. How on earth have they preserved those carvings of wood, exposed to the elements, for 600 years?
We've only visited one of the Cathar castles in our area of Southwestern France, but it was worth the hike up a steep path. And there are so many more to explore yet. 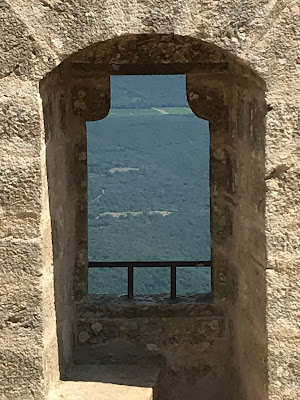 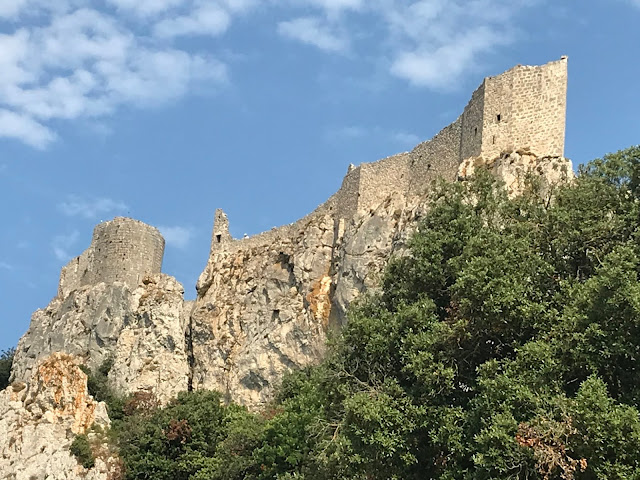 As for the food, I could post a different picture every day for the rest of my life of all the delicious food I've eaten in France. My favorite is still the foie gras on Cours Mirabeau in Aix en Provence or a scrumptious duck confit with roasted potatoes, and those are delicious almost anywhere in France .
Plus, Earl and I discovered the joy of the café gourmande, a dessert that includes a small cup of espresso and a sampling of desserts from the menu. Why wouldn't you choose a taste of everything? 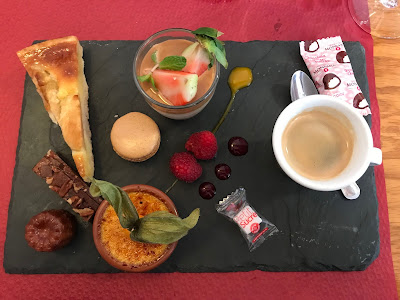 Looking back, the thing that struck me most was how decadent it felt to wake up every morning and only consider what I (and my husband) wanted to do. After 26 years of raising children, my husband and I put an ocean between us and the day-to-day duties. We still talk and text regularly with our kids, but we aren't the go-to answer for every problem any more. I suppose we could pat ourselves on the back that we helped our young adult kids to become more independent, but truthfully, for us, it meant more nights of full sleep rather than tossing back and forth as we tried to "solve" dilemmas for them. So, in many ways, this new life feels selfish.
But we have to push past those Puritan tendencies to eschew pleasure. Maybe we can continue to do the things we want while finding a way to give back to people in need. When we return to our village in Southwestern France, we'll look for some volunteer opportunities.
But one thing we weren't Puritan about was the amount of alcohol we drank. We quickly fell into the idealized French lifestyle, drinking wine for lunch, having an aperitif before dinner then wine with dinner. Some days, we admitted that we should cut back on our drinking, but since we have arrived back in the States, we rarely drink, so it's not a drinking problem, it's a lifestyle opportunity in France that we embrace.
So what have I learned after a year of living without a home, a year of traveling and embracing life? Much like Dorothy in the Wizard of Oz, I learned that I always had home with me.
It opened my eyes that maybe I should have spent more time enjoying the life I was living in Ohio rather than longing for France. And I have to be careful that I don't spend time in France longing for my old life or time with my kids.
I worry a bit that I could be the kind of person who is never satisfied no matter where she is. Yikes!
As I return to France, having spent ample time with my parents and squeezing my children until they beg to be let go, I promise to embrace the life I'm living wherever I am.
at January 03, 2019

This is a beautiful post, Paulina. Very thoughtful. You have had some tremendous experiences in the past, mostly good (a few funky pet sits, too, as I recall!). And learned how to assimilate in a new culture. That's probably more important than ever these days. Your observations are fascinating and intriguing and I say Bravo! to you.

The Klimt immersion will go down as my favorite cultural (and perhaps favorite-period) experience of the new year. Your photos of this are fabulous! We were both lucky to see it.

Jeanie, I'm so glad you got to see it, too. I believe there are new programs there now. I'm going to check before we head back to Paris. Thanks for reading and commenting.