On our last month in France for the year, we packed in quite a bit. We didn't know it was our last month there. We had purchased our tickets to return to the States for December 11th, but my dad had a wound (since April) that wasn't healing and they began talking about what to do if it didn't heal. My mom sounded overwhelmed and we decided to fly home at the end of October to support them.
But October arrived with two trips planned -- a week at Lake Como, Italy, and a long weekend in Ireland with our friends Jules and Jack.
First Lake Como, we'd seen the pictures and knew if was a peaceful lake surrounded my mountains, so we booked five nights there. We drove through the Alps, spending a night in Chambery.
The lake was as beautiful as advertised.

The pool and the room both faced the lake. It's so relaxing to hear the water lapping at the shore.
We spent some time trying to find sailboats to rent, but the weather and our schedule didn't fit. He ended up renting a speedboat while I taught one afternoon.

We returned to Quillan for a "normal" week before we took off for Dublin.
Here's a picture I took of a post office truck. It's such a French sentiment.
Then we flew off to Dublin for a long weekend. None of us had ever been to Ireland, so it was an adventure from the beginning.
We enjoyed some different food, and a lot less wine. I'm not much of a beer drinker, but I had a Guinness when we first arrived.
One day we took the train out to a seaside town. The weather cleared up some after we had seafood in a restaurant/bar along the shore. 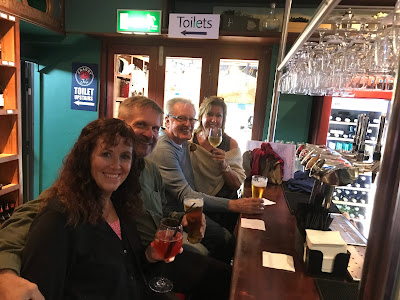 One day Jules and I took a bus tour to visit Blarney Castle and Cork.

Getting down to kiss the Blarney Stone is no easy feat. A number of people looked at the situation and changed their mind. You hold onto those bars and lean over to kiss the stone which is down the wall. It's kind of like a backbend. These guys are there to make sure no one dies.
After our weekend in Dublin, we flew back home for a few days before our departure for the States.
We enjoyed getting together with our friends once more at a restaurant where our French friend Cedric is interning to become a chef.
Then we sadly said goodbye to our friends and looked forward to a few months filled with family. We drove the car to Paris, returning it to our friends there.
We spent a few days in Paris before our flight. We always like to stay when departing or arriving. The restaurants along rue Mouffetarde never disappoint. Earl had French onion soup as his starter while I went with a favorite of goat cheese salad.
And we flew to Florida on October 30, just one day before Halloween, thrilled to see Mom and Dad and to help, however we could, for Dad to heal.
How is he? Well, I'll sum up November and December tomorrow because in two days, we leave for France again.
at January 18, 2019

I am loving every moment of reliving your year in France! Merci!

Thanks for reading. Now onto more adventures