Festivals and Dog Days in August 2018

August in the South of France! It's got to be tourist time, which was fine. Our cafe was more crowded and the lines sometimes stretched out the door at the bakery, but the market was in full swing and the town felt vibrant
I had lots of good runs --early before the heat got too intense.

I loved being out on the streets early, seeing the markets set up or people preparing for work. Often I run along the river because it's one of the flattest roads in the village. And sometimes I could persuade my friend Jules to come along.
Even though we live in a small village, the bakery is phenomenal. I visit nearly every day.
But the pace wasn't all lazy days. Mid-August found us in the midst of the village festival. One of the first events was the mayor handing out kerchiefs with the name of our village on them. 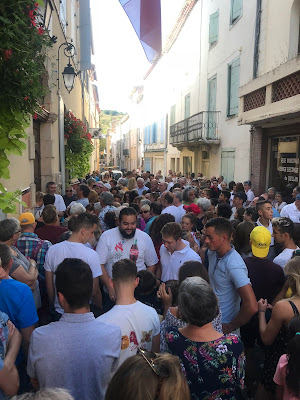 You can see that a lot of people crowded into the street in front of the mayor's office waiting for the red kerchiefs. A British friend had his nieces and nephews along and one boy wanted out of the crowd so Earl put him on his shoulders and he snapped this picture for me.

But that was only the beginning of the village festival. One day there was a bike race -- a Criterium that included professional bikers.

The village was quite packed near the announcer, but the crowds didn't stretch down to this corner by the blue bridge.

We didn't stay for the entire race since the riders were making a circuit and we weren't invested in the winner. I think we returned to Jack and Jules house for cake and more wine.
Every night of the festival, the village had music. Sometimes a band would play early in the evening, but the real music began at 10 -- after dinner -- and lasted until 2. We ventured down to the square for music a couple of days, but we didn't realize how amazing it was until the final night. Next year, we'll be there dancing each of the five nights of music.
And the band took a break for fireworks. We stood in front of the stage, dancing and singing along til well after midnight. We didn't make it til midnight, but next year!
Later in August was another community dinner. We gathered under a tent with friends for aperitifs before we were served moules (mussels) as an entree. The main course was pork jowls, so not my favorite meal, but when the music started, all was forgotten.

When we weren't in the middle of festivals, we often took bike rides, like the one to the festival in Esperaza. That village is famous for its quirky arts and exotic items.

Toward the end of the month, Spencer had a car accident, so Earl flew back to the States to help take care of all the paperwork and details that can get tricky to handle when you're a young 20-something.
Here he is with all three of the kids enjoying a meal on a patio. 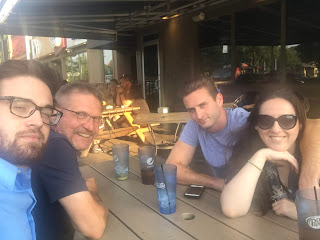 It was strange to be in France without him. I worked hard at teaching and spent time with friends.
Often I'd go to the bakery in the morning and buy a pastry for breakfast along with a baguette sandwich that I would cut in half for lunch and dinner. The bakery served all my needs.
And that is how August ended, with me alone in France. Earl did all the things he had missed in the States, like hug the kids, and I was jealous.
But I was in France, so everyone else was jealous.
at January 16, 2019