February began with us surrounded by water at our housesit along the Charente River. We continued daily dog walks in our borrowed Wellington boots, and I went for runs along the country roads.
This was the month we fell in love with Cognac. The city was only about 30 minutes away, so we would hop on the highway and make our way to the stone city. We found a local bookstore with some English books, a computer repair store, a barber shop, a store with hats for men, and a restaurant we returned to again and again.
The main square in Cognac is a delight to sit in when the sun shines. School-aged teenagers hurry past the cafes, and people from all over Europe seem to gather there for seminars or meetings. Their languages are a cacophony of sound as they pass by or huddle at nearby tables. We tried some vin chaud, warm wine with spices, as we sat in the winter sun.
We explored restaurants throughout Cognac, those recommended by Google or Yelp reviews. We were rarely disappointed.
One restaurant offered a buffet for entrées then brought the main course to the table

In the Charente, we learned to love Pineau des Charentes, a strong sweet aperitif. It's technically called a "fortified" wine. We were sad to learn that it isn't served throughout France but only in this region.

We also ventured to Bordeaux one day. We walked along the river there and found an outdoor restaurant that served us drinks before a late lunch.
Poor Earl could not adjust to the strange things they do to gin and tonics. Many of them use lemons. This one included some sort of lime juice. But we didn't care because we were sitting outside in the sunshine.
We could definitely see why many Brits were attracted to this region of France, but the south was calling us, so we went to spend two weeks in the top contenders for us.
We returned to Quillan, a small town surrounded by mountains. We loved walking out the door and onto a trail. Our Airbnb hosts were Australian and so helpful at suggesting what we needed to know about living in Quillan. (Of course, spoiler alert, this is where we eventually settled.) 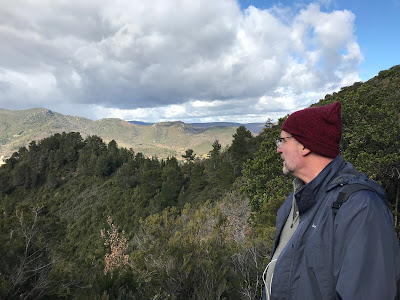 But we also went to Pezenas, a town farther east and closer to the Mediterranean. The town definitely felt wealthier and more touristy. It was beautiful, but I missed the mountains. I celebrated my birthday in Pezenas, got my first French haircut, which turned out okay, 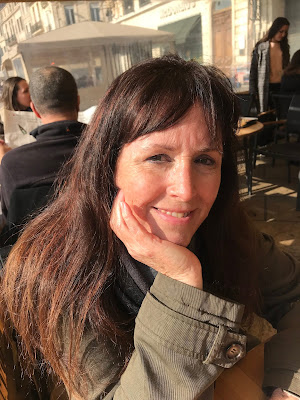 and we traveled on to England, a first for Earl.
We stayed in England until March, walking dogs and laughing at Spud the dachshund puppy, except when he picked up a dead frozen squirrel and we had to chase him down. 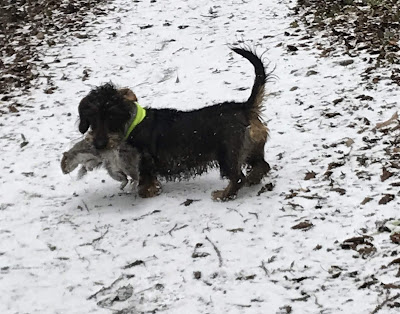 The language made things easier in England, but we'd been spoiled by French drivers who gave way to pedestrians and we nearly got run down by cars.
Mostly we spent that first week, at the end of February, walking the dogs and basking in the sunroom. 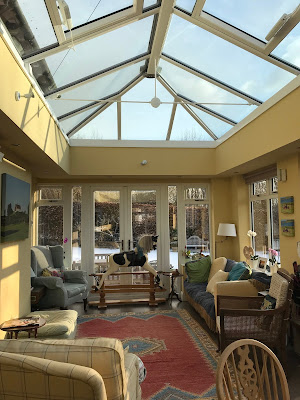 We read a lot of books and strolled through British countryside. We visited restaurants and pubs and got a taste for life that seemed just a bit too close to American for it to feel exotic.

It's fun reliving your journey with these posts, Paulita!

Jeanie, Thanks for reading. I know I've been on hiatus so not many people may be sticking around to read my posts. I'm trying to remember all the fun so I don't feel sad about leaving the kids again.

You may have already discovered that even if your local cafe does not offer Pineau, you can buy it yourself at Nicolas or any decent sized wine store. It's inexpensive, and does make a nice aperitif when chilled. When are you going back to France? Will you stay in Quillan?

Kiwi, Thanks. We hadn't been able to find it but maybe we need to try harder. We fly back to France on January 20th.

I started reading your blog a few weeks before you returned to the US. I'm so glad you are continuing to share your adventures. I don't comment often, but I will read regularly.

Mary, Thanks for letting me know. I've been on a hiatus but hope to be better about posting in the new year.