Can you imagine having a month to luxuriate in the joy that is Aix en Provence? It was my dream come true.
The first time I visited Aix en Provence in 1985, I felt like I was home. Standing in a tapestry store and picking out yarn, I experienced that sinking into my soul of belonging in a place.
So when our friend Delana proposed we cat sit in Aix en Provence while she joined her new beau on a catamaran in the Caribbean, we said, "Of course!"


The trees were just beginning to sprout in early April, and we got to see them come alive with fresh green leaves throughout the month.
A feeling of contentment oozes through me as I think about our time in Aix, even though it wasn't perfect, since my wallet was stolen at the market, but most of the time was pretty blissful.
Earl went to visit his sister who was staying in Italy, so I spent four days alone in Aix. I juiced during that time to stay in control of my weight which was climbing with French pastries, and on the day he was coming back, I broke my fast with a scrumptious meal that I ate numerous times in France

This is actually an entrée, a starter to a meal, but I made it my entire meal a few times. Foie gras is usually served with sweet bread and a sweet wine is recommended to accompany it. Here, I'm having a kir au vin blanc, like a kir royale but with white wine instead of champagne.
The two of us made a few day trips during our time in Aix. We drove to Briancon in the Alps to meet some Columbus people -- Mary and Randy -- who worked with Earl at the Columbus Dispatch.
Guess what we did when we got together with them? We ate. 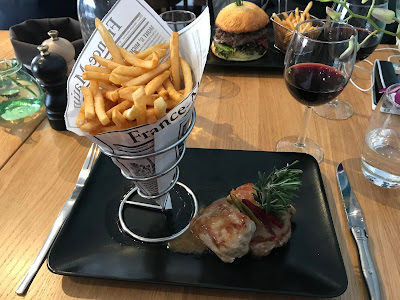 And then we walked and explored with the mountains in the background. It was a treat to have a day with people from home. 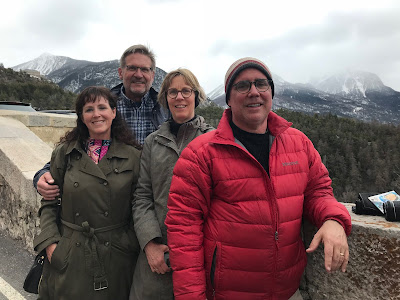 We hurried home at the end of the day to be with Arthur the cat.
On another day, we drove to Beaune in Burgundy to buy used bicycles. We had rented bikes from this same company a decade before, so we knew they were good ones. We lucked into used bikes that were the right size for us -- a big one for Earl, a small one for me.
And then, after the drive home from Beaune, we took our first bike ride. We visited Equilles, a place that we had ridden through long ago on a bike trek around Provence. It didn't seem exactly the same as before, but I knew I had posed at this overlook. 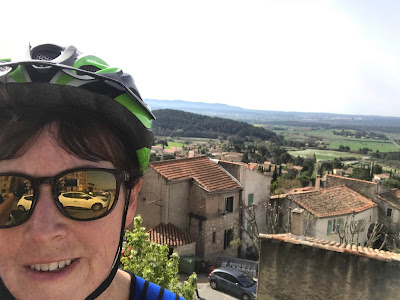 One day, Earl and I decided to explore Aix en Provence. We took the city map and tracked down the 12 fountains listed on the map. 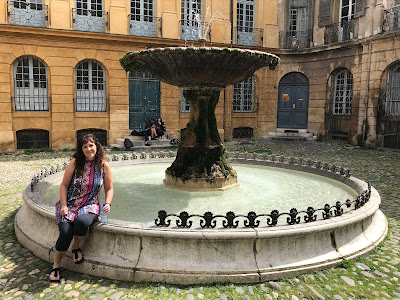 There are more than 12 fountains in Aix, and many times we weren't sure if we were at the right place, but it helped us discover a few areas we hadn't explored before.

As our relaxing month passed the halfway mark, my wallet was stollen from my purse at the market. I felt the bag lift off my hip as someone lifted the flap of my purse which was not zipped shut, and when I turned, the wallet was gone and so was the pickpocket. I know they're professional, but I was feeling so comfortable in Aix en Provence that I hadn't been cautious. I wrote a blog post about my experience and then about the police recovering my wallet with only the cash missing. Still it was quite the pain because I cancelled all of my credit cards and it took a very long time to get them replaced because we weren't staying in one place. Also, when we went to rent a car at the end of the month, I didn't have the credit card I'd used to reserve the car, so that was a pain. Rules are not meant to be bent in France.
At the end of the month, our sons, ages 22 and 24, came to visit. Earl took the train to Paris to meet them and returned with them to Aix en Provence.
Our first trip was to Bandol, a village where we stayed with the boys when they were 10 and 12.
We found the same bay, and the boys waded in the water, drinking beers on the shore.
On another day, we visited the Carrières de Lumières, that I mentioned in my post about favorite things last year. We drove about an hour from Aix en Provence to a remote section of France, the nearest town being Les Baux des Provence. In spite of the twisting, turning drive to get there, buses had made the journey dropping off loads of tourists, but it didn't really matter once we were inside the old quarry seeing the art projected onto the walls. 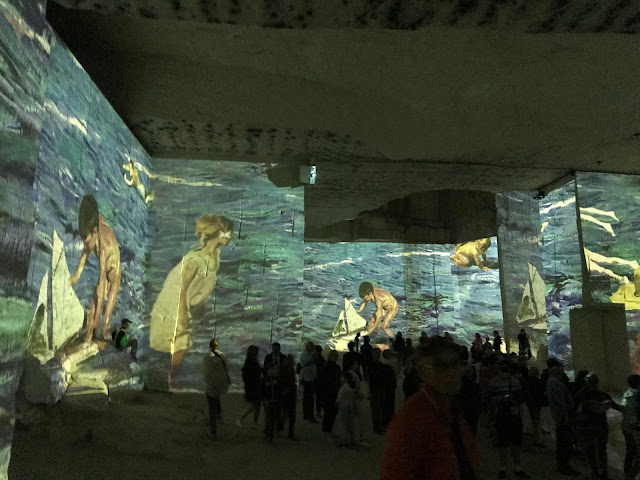 I can't begin to describe the experience to you, so just try to go, whether in Provence or Paris. The music coordinating with the movement in the paintings, one fading into another as the colors emerged. Spectacular. Here's a link to my original blog post.
After we emerged from the darkness of the cave, we drove to the Pont du Gard and let the boys experience the awesomeness of the Roman aqueduct.


The next day, we showed them Marseille, a city that we've fallen for. We love walking along the harbor and finding a good meal with a view of the water. We still laugh about the salad we ate there, called a romaine salad but it had no romaine lettuce in it. Instead, it was full of arugala. Arugala, as we came to learn in Italy, is called rocket. I didn't care for the bitter taste of the arugala, so would always inquire whether the salad contained "rocket."

We walked around Marseille, snapping photos of the architecture. Just a lovely way to spend the day. I could do it over and over again.

And as the month ended, we picked Delana up from the airport and returned her to her apartment as she announced that she was selling out and moving to be with Mitch, the man with the catamaran in the Caribbean. We spent one night in a hotel before heading to Italy.
We detoured into Monaco and had a drink on the beach, because we could. 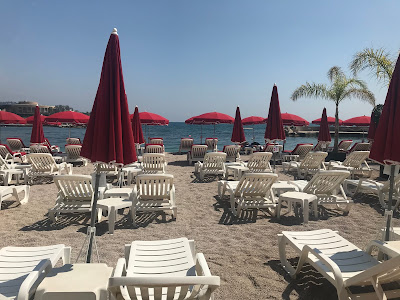 Then we continued our trip to Italy, arriving that night in Florence. I had been briefly to Florence with a student tour, but other than that, it was all new to me.
We explored the city, walking and eating -- plus morning runs for me. 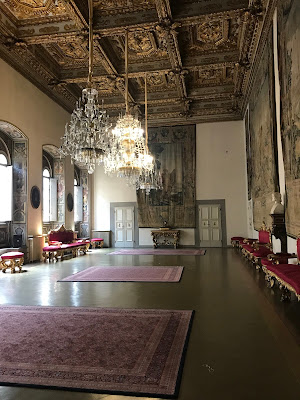 Everywhere we turned, there was amazing architecture and history 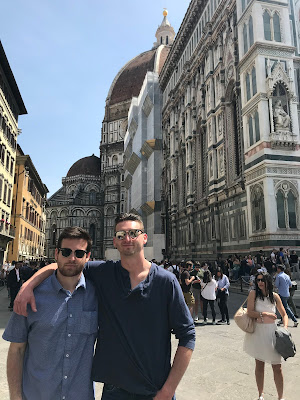 Along with crowds of tourists. But that's okay. It's a big city and we had no problem finding beautiful things to enjoy amongst the crowds. 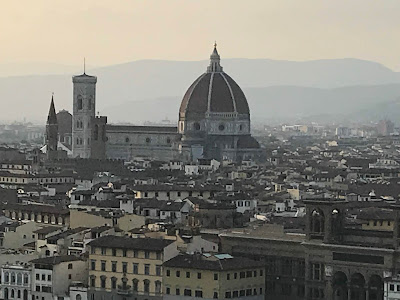 We made our way to a high spot in the city that is famous for watching the sunset. 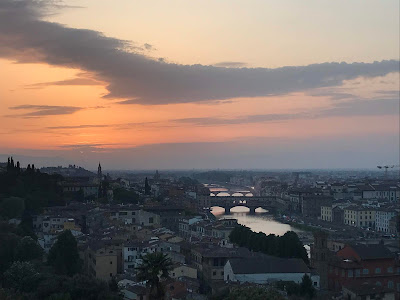 And we watched the colors flame over the Medieval town. 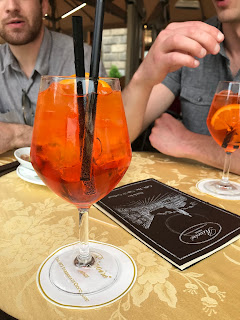 Plus, I discovered the aperitif Aperol Spritz, which is bright orange and refreshing, but a little bitter.
I've enjoyed it in numerous places since then, but it will always mean Florence to me.

April alone would have been the kind of month-long vacation that people dream of, and lucky me, it was only a month in my first year as an ex-pat.

Our travels with our boys continued into May, and hopefully, that post will be up soon.
Hope you're enjoying this recap, which helps me remember how amazing our year was as we prepare to return to Europe.
Our first stop is Paris, then our new home town Quillan, before we go to a housesit in Umbria, Italy, where we can visit Siena and Assisi. I'm excited already.

I love those ubiquitous carousels! What does it say about how the French, as a society, feel about children? I know this sounds like an essay question but their preponderance does ma me wonder. In 250 words or less, please discuss. 😂

Sim,Lol. You're right. It's true that priorities are different there. I wonder if it isn't just about children but about a gathering space, a town square, a community.