As July dawned we wove our way from Aix en Provence to find fields of lavender. 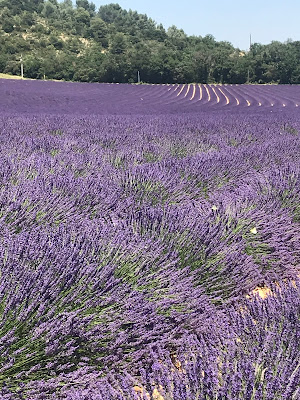 The fields were gorgeous and smelled heavenly, but mostly what I remember about this drive was that Earl and I had a huge fight. Yes, I don't want anyone to think everything is sunshine and roses during this first year abroad. It's an adjustment, spending every minute of life together. I imagine it would be an adjustment whether we were in the States or in France.
The fight eventually faded and life returned to normal, whatever normal is for people without a home.  Will I always remember our fight when I smell lavender? I hope not.
We returned to Quillan in time for an English-hosted 4th of July party.
In honor of the French national holiday, which we call Bastille Day and they call la  Fête National (14th of July). Each town has its own Bal de Pompiers, or firemen's ball to celebrate la  Fête National.
There's nothing equal to these village-wide celebrations that I have experienced in the States. So many people, young and old, come together. Everyone must bring their own place settings. There are drinks to begin, followed by entrees, a main course, cheese, dessert, and the wine flows. All of this before the dancing begins.


Later in July, the culmination of the World Cup saw France playing Croatia, so we gathered in the square to watch an outdoor television. Getting drinks was a bit difficult, but everyone managed to get more than enough.
And France won! We loved the euphoria of being in a local crowd when France won.
But the amazing experiences weren't over. We planned a trip to Carcassonne to watch the Tour de France whizz through. But we had bad luck with our AirBnB, so after a sleepless night in a place with bedbugs, we returned to Quillan without having seen the Tour de France.
Our friends Steve and Lou revived our dream though but suggesting we follow them to a spot where we could watch the Tour.
What a great time. Some people who are a bit jaded scoffed at the idea of parking, walking among the crowds and finding a place to watch the tour zip past in just a few seconds, but I loved it all.

For years I have watched the Tour de France on TV and this year, I got to see it in person. I spotted the leader in the yellow jersey and the mountain leader in his spotted jersey.  Guess what, I plan to go back in 2019.
In between big events, I had some scenic runs, and we shared some delicious meals with our new friends.

Earl and I were car-less during all of this time, relying on our friends and public transportation for where we wanted to go. One day some friends invited us to explore a nearby Cathar castle ruins.
The countryside is dotted with them, and our friends Jim and Teresa were visiting all of them.
On the drive to the castle, we passed a field of sunflowers and stopped for pictures. 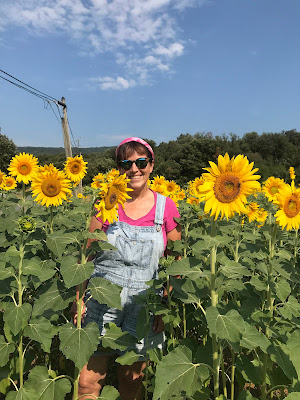 The hike up to the castle was a bit challenging but well worth it once we reached the top. Our friends who had explored the other castles said this Chateau de Peyrepertuse was the best of the lot.
The architecture was amazing, too.

So our France-centric month closed with celebrations of Bastille Day, the French soccer team winning the World Cup, a glimpse of the Tour de France, and a visit to a castle.
Another dream-come-true month.
at January 15, 2019

As always, you hit the nail on the head with your writing. So many things to do and awestruck places to visit so close to home. Jx 😙

My biggest fear when traveling with my husband is an argument and even worse when we are with a tour group. I'm a private person and don't like disagreements so I do remember where and when but with time at least the sting goes away. I envy couples that quietly talk things out - do they exist?
I'm glad you are recapping the year - not only for your memory but for our pleasure, too.

Martine, Merci pour vos commentaires et votre soutien.
Just Me, Yes, how lucky are we to be surrounded by beautiful places.
Sillygirl, Thanks for reading along. You're right that it's mostly for my benefit. Arguments are the worst, but somehow cleansing too. I like to hope we're growing after each one.