Lifestyles of the Rich and Famous

I posted this picture of Earl swimming one morning during our week in Lake Como and a friend commented that we were living the "Lifestyles of the Rich and Famous." 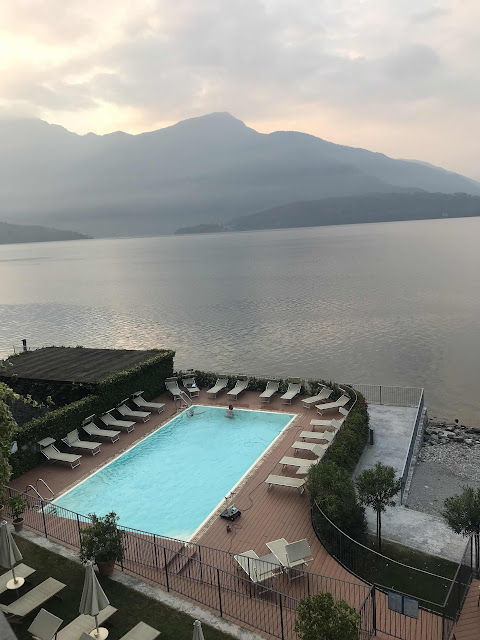 And maybe it does seem kind of bragg-y to post pictures of our travels to places like Italy and Spain.
But truthfully, the trip cost us no more than a drive to Florida from Michigan and a week in a hotel. Since we're living in France though, we can skip across borders in quicker time than driving from the north to the south of the United States. It was a 10-hour drive there as we stopped overnight in the French Alpes, a night in Chambery for $65 and quite a nice hotel.
Then we drove on to Lake Como the next day.
The most expensive part of the trip was the tolls, and through the Alpes, we had the 44 Euro expense of a tunnel. The tolls were much cheaper on the way back along the Mediterranean. So we paid about $115 in tolls on the way there and probably $80 in tolls on the way back. Each trip took a tank of gas. 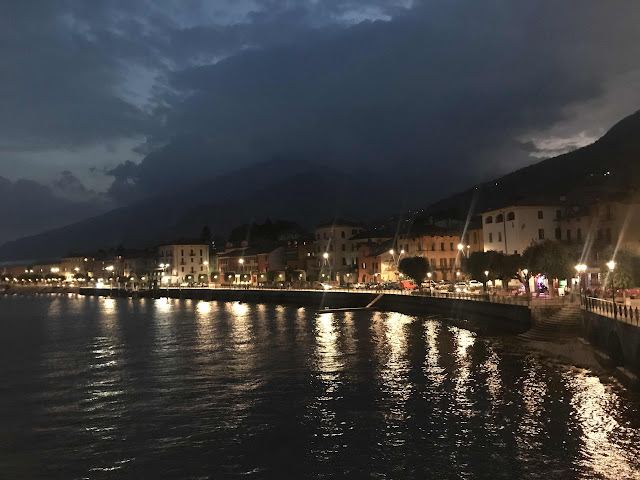 As for the hotel, on the banks of Lake Como in Gravedona, Italy, I found it on Travelocity and we paid $133 a night for a room that faced the lake and included a balcony.

The price of the room also included a breakfast buffet.


As for  other meals, I figure we have to eat when we're home so the cost of food isn't going to be that much more while we travel. We eat out too much in our current rental in France, but French food, come on!
So although our lifestyle may look glamorous, it's only our location that allows us to travel from place to place, soaking in the atmosphere, the culture, and stumbling over languages we don't know.
People are generally very accommodating as long as we say hello, please and thank you in their languages, they work with us.

We had some things we wanted to do. One of those was sailing. Earl has always wanted to take sailing lessons but back in Columbus was told he was too big for the teaching boats they had.
The poster for sailing said we needed sneakers and a waterproof jacket. So we spent our first morning searching for sneakers for Earl, but I resisted buying a waterproof jacket, insisting they must have some on hand.
We tried calling the sailing place several times but never got an answer. When we went looking later in the day, they weren't open so we took out a kayak from a neighboring boat place.
Earl rented a motorboat one afternoon while I worked.
Other than that, we walked around the two neighboring villages, enjoying the ambiance.

The scenery around Lake Como was breathtaking.


Now don't hate us, but next week we're off to Dublin, where the round trip flight is $75 per person. Can't pass it up.

No hate here. Mark and I loved finding affordable places to stay, breakfast included throughout Europe. Enjoy your trip to Dublin... such a deal! And please tell me you ate sfoggliatella while you were in Italy???

Far from bragging, you are exciting people with your travels and providing good information about how reasonable it can be pricewise with a little advance planning. I've never understood why hotels and motels in the U.S. charge so much for a night's stay, compared to the European places. They certainly are not offering a more generous package of pay and benefits to their employees! Your photos of Lake Como are really breath-taking.

I understand what you are saying. People think we are living high off the hog when we winter away for several months. But in truth, as you say we have to eat anyway. We own timeshare so it doesn't cost us much in rental or we rent for a month or tow, our places always have kitchens,

Off to Dublin, my birthplace, and a place we have visited many, many times! Looking forward to hearing your thoughts.

Sim, No, I didn't find sfoggliatella while we were in Italy. As a matter of fact, the meals were rather disappointing. Burger King on the Autostrada might have been the high point.
Kiwi, I appreciate thinking about it as an inspiration rather than bragging.
Jackie, Yes, your travels are always amazing.

Breath taking pictures. It all sounds glorious. Thank you for sharing.

Really a beautiful blog.It is very astonishing and marvelous design.