We decided to take a trip with some American friends who live in France. We spend a lot of time together and have become close enough to endeavor traveling.
Although we considered exploring Lyon, France, just a train ride away, some convincing from our British friends convinced us that we should go to Dublin, Ireland, a place none of us had ever been.
As I explained in a previous post, traveling from within Europe is relatively inexpensive, so we got seats on RyanAir and flew for about $75 round trip each.
I didn't really know a lot about Dublin, other than Guinness, pubs and Irish accents -- and I found them all delightful.
We used a lot of taxi drivers, since there were four of us, it was about the same price to take a taxi as a bus, and all of them were charming and interesting. Some of the accents were so thick that I got bruises from my thigh where Jules would poke me every time a cab driver said tink instead of think. One also said "whores" for "ours" and it took me a while to figure out he meant our house rather than whore house.
So the people delighted us right from the beginning.
The first day we focused on pubs, finding ourselves at O'Donoghues pub, which we squished into with people standing three deep along the walls and reaching for drinks from the bartender. An alleyway set up with tables and bar stools allowed us to examine the culture a little bit.
Whoever started the idea of an Irish goodbye, one where people slip off without saying goodbye, had obviously never been to Ireland. I watched people say goodbye, shake hands, share hugs, one last cheek kiss. Go already! I wanted to say. But the intoxicated young people had more goodbyes to share before they parted.
We asked one of the young men serving where we could find the music. Apparently, it was going on inside, in a couch and chair right inside the front door. We muscled our way in and listened to some Irish men playing songs then taking a break. The main musician stopped to chat on his way to and from the bar (or bathroom), but had no interest in playing my favorite singalong song from the Irish bars in Washington, D.C., where I went to grad school (The Unicorn Song). The music was hard to hear over the crowd so we eventually made our way to a hotel restaurant.
The next day, we took the tram to a fishing village called Howth and escaped from the wind in a seafood restaurant called Crabby Jo's, probably related to all the other "Crabby" restaurants in the U.S., maybe around the world.


Jules and I did some shopping that evening along Grafton Street before we went in search of bars again.

Our first stop was an Applebees-type place. We had a drink and followed my daughter's advice to find O'Shea's Hotel and restaurant.

Finally, some good Irish music to enjoy while we had seafood chowder, fish and chips and bread pudding.
The next morning, Jules and I embarked on a day-long tour.
Luckily, the sky was a glorious blue even though the temperatures were a bit cold.
Our first stop was the Rock of Cashel, the ruins of a castle and church that dates back to the 12th and 13th century.

Next, the tour bus chugged on to Blarney Castle near Cork.

Note the shortness of my dress in the picture above, and you won't be surprised to see that I stole Jules' shawl to throw over my legs while I stretched upside down to kiss the Blarney stone.

The guy holding onto me has a job to help each person lie down, slide upside down, kiss the stone and then pull herself back up. He keeps people from falling to their death. Why kiss the stone? Allegedly it gives the gift of gab, which is something neither Jules nor I need, so I'm not sure why we kissed it. Some say it gives the gift of eloquence, something I could use many times.
An American woman in front of us who kissed it claimed she would now win the lottery. So maybe the ideas about the Blarney Stone have evolved.
It's a bit nerve-wracking when you're as short as I am, but I gathered up my courage, and Jules' scarf, and dipped backward. You can see my curls hanging down beneath the stone.
The castle is gorgeous, although the stairs are treacherous. In the U.S., they would either close it off or make all kinds of changes to make it safer.
There was even a bedroom for Earl. 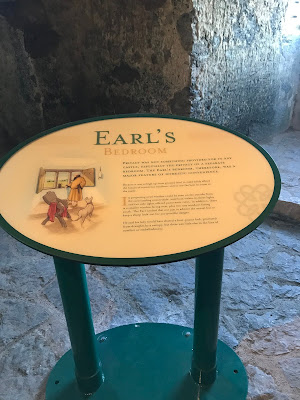 The castle also has a murder hole, an oubliette, plus a poison garden. It has pretty much everything you want to see in a Medieval Castle.
The bus deposited us back in Dublin that night, after a brief stop in Cork, and we felt like we'd caught a glimpse of Ireland before we flew back to France after three nights speaking -- kind of -- English.
at October 24, 2018

Just looking at those broad smiles tells everyone you had a good time!

Delightful post. I sure did enjoy this visit. So funny.

Sillygirl, Yes, we continue to enjoy our travels.
Just Me, Glad you're still reading along.