Today, we went to the butcher in town and it took me back to my childhood.
I'd tried the door of the butcher before, only to find it closed -- on Thursdays, and until 4 in the afternoon for lunch, but with my husband in tow to push open the big door, we entered.
Chez Richard is the butcher and he's a burly man. 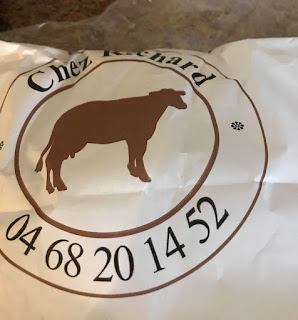 My French friend Maurice asked him last weekend if he played rugby, but he said he wrestled instead. Yes, Maurice went to the butcher when he was here, but I had to hurry home to teach an English class so I didn't meet Richard the butcher.

Today, we stood in line behind a woman who ordered three different things, including a sauccisse, a long sausage that the butcher pinched off halfway, about two feet long. He curled it like a snake and wrapped it in paper for her.
Earl and I were there to buy hamburger. I had collected most of the ingredients for Cincinnati-style chili. If you haven't lived in Ohio, you might not be familiar with it, but it includes cinnamon.
I haven't been cooking very much in France. I mean, why would you cook with all of the fabulous restaurants and bakeries. But there comes a time when you have to stop living like a tourist.
I was prepared, a little prepared, because Maurice had pointed out the machine where the butcher would grind the meat.
I'd thought to order steak haché, but as I perused the board, I saw that biftek haché was the way to go. Biftek means steak.
My next task was to figure out how much. The recipe called for a pound, but France deals in grams. So I decided to go for half a kilogram, or 500 grams. That's cinq cent grams in French, if you ever need to order it, and a little more than a pound. 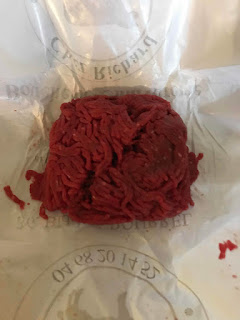 The butcher smiled and opened a cooler, pulling out a large hunk of dark red meat. With a cleaver, he chopped off  a large hunk then chopped it down to three long strips. The meat went into the machine and came out ground before he wrapped it in white paper.

The whole process reminded me of those long ago days when my mom would drive out to Sherwood's Market, a bit outside of town, but the meat was worth it, she told me. It was a butcher shop with a small grocery that grew up around it.
So I thought of my mom as we gathered the paper wrapped meat and walked home with it.
The Cincinnati-style chili wasn't as good as it might be at home. I had to substitute some spices, like paprika for chili powder.
But Earl and I both ate a bowl and there are leftovers for tomorrow.
Now that I have bravely entered the butcher's shop, I'm sure I'll go back. Maybe for a pre-cooked canard (duck) or a turkey breast. Who knows what I might find in the butcher shop and be reminded of a more old-fashioned way of doing things.
Next on my list of things to make, cinnamon raisin bread. I just have to wait until Saturday when the market comes around again so I can buy the raisins. Our local grocery doesn't have raisins, but the woman with nuts and dried fruits does. And this time, I'm getting 500 grams so I don't run out.
at June 19, 2018

You are so brave! We've been in France more than a year, but I am still so intimidated by the butchers! What are the cuts of beef, how will I not wind up with 50 pounds of raw pork, what if I accidentally order 200 euros worth of meat?

Kiwi, Ha! Yes, it is intimidating. I definitely try to have a plan before I walk in. Our butcher also has charcuterie, so the first time I walked in with my friend Maurice, he advised 4 tranches du jambon de pays. I didn't stay, but I got the idea about the amount. I'll keep trying and you should too.