My Days in France

As we round the corner to three months in France, you might be wondering what my days look like.
In some ways, they aren't that different from when I lived in Ohio, but the biggest difference has to be the amount I'm working (or not working). Perhaps my days would look the same if I was only teaching one online class at home, but my life obviously revolves around food much more here than it did in Ohio.
If it's just me and Earl, no visitors, then I go for a run in the morning. I'm still finding my way. This morning, I tried to run toward the small roads that lead to Mont Sainte Victoire, but I turned around when the sidewalks stopped. I've also discovered a park with running paths, but I barely get two miles when I cover all the trails, so then I have to repeat them, which is fine.
The park has a beautiful creek running through it and some sweeping weeping willow trees just changing from their winter blonde to a springtime green.
But my favorite way to run is to run out two or three miles then run back two or three miles. That way I can't wimp out halfway through. I have no option but to take the route back.
When I return to the apartment, I make my coffee. I'm currently drinking caffeinated, which is something I didn't do at home, but usually only one cup, unless we have espresso after lunch, or dinner.

Most mornings, we spring for croissants or pain chocolates or pain au raisins, some sort of vienosseries from the bakery, but this morning, I knew I was going to the market, so I made do with bread and jam. And sometimes, I'll eat oatmeal and Earl will eat cereal. We don't want to be too addicted to delicious baked goods. As a matter of fact, I'm a little jaded already, eschewing one bakery in favor of another because of the quality of their breakfast breads.
Today, the Saturday before Easter, I knew we had to visit the market and stock up. Easter Sunday should see most things closed, including restaurants, and then Monday is a "bank" holiday known as Easter Monday, so most things will be closed again.
I wanted to plan meals but only got some vague ideas, picking out asparagus, a melon, some premade paella and rotisserie chicken a la moutarde.

We stopped in the Monoprix grocery in the basement of a department store for some necessities, like lunch meat, some noodles and sauce as a back-up meal.
But we couldn't walk home yet; we needed to stop at the bakery, purchasing two loaves to get us through until Monday, or possible Tuesday, depending on which bakeries were open on Monday.
Once we got back to the apartment, we unloaded all our goodies and prepared lunch so we could eat the market food while it was still warm. And, of course, we included a glass of wine, even though it's lunch time.
We have to do some cleaning. Dishes, laundry, sweeping the floor, changing the beds. And there's always some sort of crisis to handle. Today we saw a huge credit card charge from a medical device at home, so that eats into our day, calling and messaging the bank, the company, trying to sort things out.
Many times we're still dealing with kid things, like Tucker applying for jobs and needing an insurance card to prove he’s insured, or Spencer texting because his car won't start and the red key light is blinking.
Sometimes we can solve things; sometimes we just have extra things to worry about. Would we be better able to handle it if we were home, I wonder? Or, are the kids learning to take care of things better since we are not around? Hopefully.

In the afternoons, if we aren't out sightseeing or going to appointments, we might read or take a nap.
Somewhere in the day, I have to find time to work. Many days, that might be half an hour responding to students online, but other days it might be hours of grading essays.
I haven't been doing very much writing, but I know I have to work that into my schedule. I've signed up for Camp Nanowrimo (by the same sponsors who do National Novel Writing Month in November). This is more free form for people who write other things, but my plan is to try to finish my current novel which is already 36,000 words. My goal is 80,000 words by the end of April, but there will be much editing to do after that.
Some time in the afternoon, we might walk back downtown and pick out a pastry for dessert to take home, or we might settle at a table and order a drink -- a pastis, a kir au vin blanc, a porto. 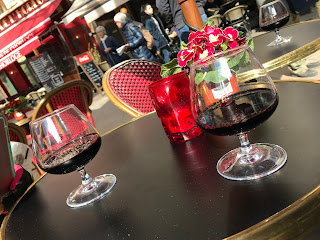 We'll sip the drinks and watch the people walking past.
Our evenings are not very active. They might simply consist of dinner, starting around 7:30 or 8 p.m. If we're eating out, we definitely won't have time for anything else.
At home, after dinner, we may watch some television on Hulu. Now that it is getting warmer and lighter, I hope that we'll have more outings, maybe some concerts or just walking along the Cours Mirabeau listening to all the street musicians and an occasional trip to the cinema.
So, that's an average day for me now that I live in France.
But if visitors come, all bets are off. Who knows where we might end up. 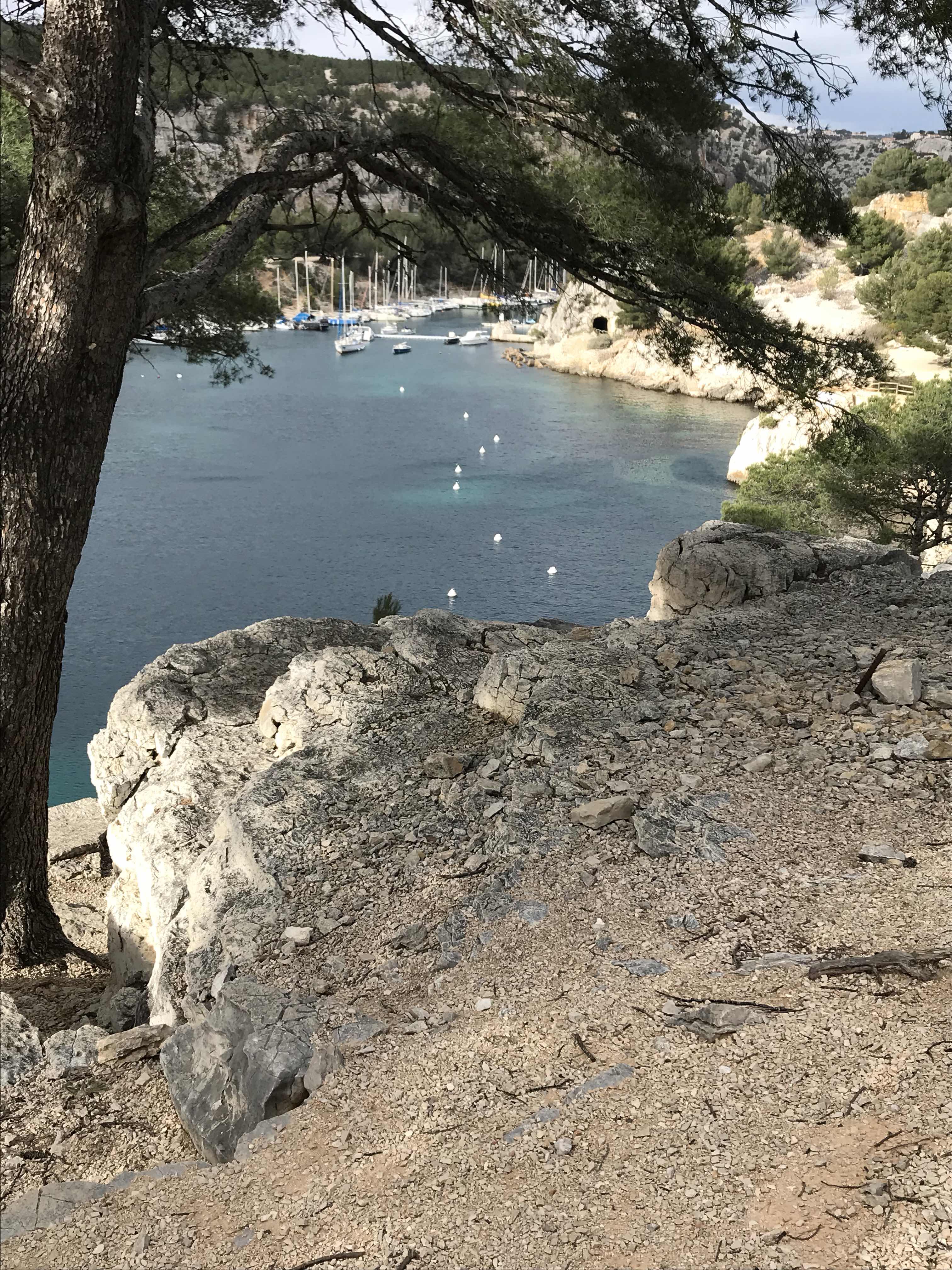 How about Earl writing about how it feels to be retired?

Even after over 5 years of retirement I still find it hard not to be doing something. Sitting and reading or watching TV seems decadent to me. John has no trouble, he says "I'm retired, I don't have to do anything".

I´m so glad you made it to France, I´ve not been on the blog or looking at blogs for months, so I think i have a lot of catching up to do w~ith your Journey. but your days sound bliss, we also had to make the decision not to enjoy the croissants every morning, it was to easy to eat rich food for every meal.

Well, this is an excellent update. Have you read through your posts since arriving in France? Such a range of emotions! And now you're settling in, which means not settling for under-par pastries!
Bravo!

Jackie, I've suggested Earl address that subject. We'll see if he follows through.
Jenny, Thanks for catching up with my adventures. It's hard to give up croissants, isn't it?
Francetaste, Yes, we may be transitioning. Life still gets complicated with the kids at home though.

It's funny isn't it, how errands and phone calls can eat up a day! Cheers to you, Paulita! You have so many discoveries ahead of you—besides the fattening qualities of a steady diet of croissants—I look forward to reading about them as you make them.

And so happy to hear you're back to your book! As far as scheduling goes, I've found I need to take care of errands, cleaning, taking my (power) walk, all that must-do stuff, in the mornings. Then I eat lunch w my hubby before I hit the novel for my rewrites in the afternoon. That's what works best for me. By dinnertime, I'm just too drained and want to kick back with a glass of wine and a book or something on tv.

Of course, I'm not living in a beautiful place with wonderful vistas close by.

I found your blog by way of Joy's British Isles Friday meme. How fortunate!
I am a Francophile at heart. And while I'm not sure I have the courage to do what you and your husband are doing, I am in awe of your adventure. Thank you for allowing us to live vicariously through your blog :)